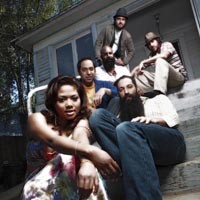 Four years ago, Los Angeles rock band Dengue Fever became the first Western group to perform Cambodian rock music of the '60s in that country since the genocidal Pol Pot regime almost eradicated it — along with nearly a third of the population.

An engaging documentary of that tour directed by John Pirozz — cinematographer from Matt Dillon's “City of Ghosts” — is being released on DVD this week. A relaxed but vibrant film, “Sleepwalking through the Mekong” follows the band performing its Khmer [pronounced “cuh-mai”]-language psychedelic pop from the teeming streets of Phnom Penh to rural shantytowns, and being well-received by friendly locals.

“We wanted to concentrate on the enjoyment of life there because so many films have been made on the Khmer regime,” says bassist Senon Williams from Los Angeles, where the band is practicing its upcoming performance of a live, original soundtrack to the 1925 silent film, “The Lost World,” for the San Francisco Film Society.

Dengue Fever formed in Long Beach in 2001 after brothers Ethan and Zac Holtzman became captivated by the Cambodian pop of the '60s, which was heavily influenced by California surf music via American Armed Forces radio. Since then the group has toured mostly small venues and had songs featured in the hit HBO series “True Blood,” the Showtime series “Weeds” and the Jim Jarmusch film “Broken Flowers.” Last fall, Ray Davies of the Kinks complimented the band on the BBC, saying its music was “like Blondie meets Led Zeppelin, and I should know — I toured with both.”

But the group's warm reception in Cambodia was largely because of the homecoming of Dengue's lead singer, Chhom Nimol, whose elegant vocals, punctuated with fluttering trills, were known before she immigrated to Southern California. “They love Nimol so much,” Williams says. “Here was somebody not trying to become more American but making us more Cambodian. … they really felt like it was an extension of their culture.”

While hip-hop and synth pop are the popular sounds of Cambodia today, Williams says that modern performers still update songs by classic pop icons such as Serey Sothea, Sinn Sisamouth and Meas Samoun; the same old songs that Dengue reworks alongside its own originals.

Much of Cambodia is quickly developing and becoming more Westernized since Williams first visited in the mid-'90s. Although the band has not been back since the film was shot, it recently began working with an aid organization, Wildlife Alliance, which hopes to create jobs in Cambodia by setting up park systems around the provinces to protect land and endangered species. “Maybe with them we can figure out a way to go back and play some concerts next year,” Williams says.

Shooting the film was an emotional experience, Williams says. One particularly memorable day he woke up early to record soundtrack music with blind musician Kong Nai, one of the last traditional practitioners of the two-stringed guitar, called a chapey, then traveled at noon to a ghetto to rehearse singing with school children, and later that evening set up a large outdoor concert for a crowded shantytown. “I got back at midnight and my brain was just reeling. … I had never seen poverty that close,” he says.

Mostly a West Coast band, Dengue Fever has never performed in Virginia, a state the 2000 U.S. Census Bureau ranked as having the eighth-largest Cambodian-American population, with nearly a third settled in Richmond. It will be headlining a sweaty night of duckpins and world music at Plaza Bowl that also features Williams' “amazing” friends from Brooklyn, Chicha Libre — which perform a critically acclaimed new wave of Peruvian cumbias — as well as local salsa act, Bio Ritmo.  S

Dengue Fever performs on Saturday, April 18, as part of a World Music Fest with Chicha Libre (Peruvian psych-rock) and Richmond's Bio Ritmo and Lauren Kendall in the Plaza Bowl at Southside Plaza. Tickets are $10 and the show starts at 7 p.m. 233-8799.