Richmond Ballet star brings a taste of Brazil to “The Nutcracker.” 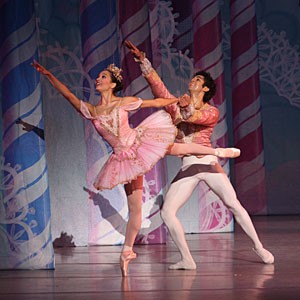 You may have seen Fernando Sabino de Jesus as the quick-witted free spirit Mercutio in Richmond Ballet's “Romeo and Juliet” last year. Maybe you enjoyed this standout dancer's madcap Joker in “Cinderella” the year before.

Or perhaps you were on the river in 2009 the day he jumped into the James and saved a drowning man's life.

But even if you had no idea who he was, if you ran into the ballet's newest dancing attraction at the coffee shop you'd doubtless be charmed — he's good-natured, unassuming and ferociously talented. What's not to like?

Sabino de Jesus hails from Brazil, and says that he comes from an utterly unartistic family. His parents were strictly religious (especially his father), and only after they'd divorced did Sabino de Jesus, living with his mother, consider following his interest in dance. “I always liked dancing, since I was a kid,” he says. “I'm the only person in my whole family that liked it.” Inspired by two visiting artists who performed at his high school, he found his way into dance classes, and even gave up soccer after a year to make more time for ballet.

In 2006 he took a summer intensive in ballet at the Juilliard School. While in New York, Sabino de Jesus took additional dance classes at the well-known studio Steps on Broadway. One of the teachers there happened to know Stoner Winslett of the Richmond Ballet, who happened to be in urgent need of a male dancer. The call was made, and he traveled here to audition. The ballet offered him a contract that same day.

Dancer Pedro Szalay was with the company at the time, and he spoke Spanish, Fernando's second language. “Pedro was translating for me the most important parts of the contract, and I signed the contract the same day,” Sabino de Jesus says. “It was crazy. I spent five hours auditioning, and then they gave me the contract, and Pedro's translating and I'm like, ‘Yeah, OK, sounds good!'”

“He's a natural mover,” Winslett says. “He had a sparkle about him that caught my eye and everyone else's.” At Richmond Ballet, Sabino de Jesus frequently works with Maggie Small, who joined the company the same year he did. She says their ongoing partnership allows them to develop together, and that their strengths are complementary.

“Fernando loves to improvise,” Small says, “and I really like to be told what to do. I don't want to choreograph. I want you to tell me what to do and I will do a very good job of recreating it. Fernando loves to just make stuff up, which we call Fernando dancing. … Which is good for us. Because you have me going, ‘No, that's not what the choreographer said,' and he's going, ‘Yeah, but look what we could do!'”

Sabino de Jesus is a quick study onstage, and in life. He and a friend were sunbathing on Belle Isle last year when they saw a man drowning in the river. The dancer reacted quickly, diving in and saving the man with cardio-pulmonary resuscitation. For his actions, he was named one of Richmond's Hometown Heroes by the Allen, Allen, Allen and Allen law firm.

In “The Nutcracker,” Small and Sabino de Jesus perform the grand pas de deux as the Sugar Plum Fairy and her Cavalier. It's formal, utterly classical ballet. “I love it,” he says. “It's Tchaikovsky, you know — you don't mess around with that! It is very technical, very challenging. In classical, if you fall out of a pirouette, people know [it].”
Together they show polish and confidence. And when Sabino de Jesus comes on for his solo section, you wonder if he might actually be able to fly.

Thinking back to the day of his initial audition, he says, “I called my mom and said, ‘Mom I got a job and I'm not coming back.' And she was like, ‘Oh, I had a mom feeling you were not coming back.' My mom — we know each other very well. She knows that I'm the kind of person who's always trying to find something new.” S