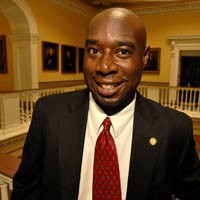 Special Assistant to the Governor for Policy
State of Virginia

Felix Sarfo-Kantanka Jr. already had his hands full. It was his junior year in college, and he was busy playing defense for his college soccer team, interning at a dispute and resolution center for incarcerated youth and keeping up with classes. Then a student-government scandal forced the president to step down and Sarfo-Kantanka, who had been elected vice-president, assumed the title.

Such breakneck pace and multitasking was good preparation for his work first as legislative assistant to former House Minority Leader Delegate Frank Hall and now as special assistant to Gov. Tim Kaine. He works as a liaison between the Public Safety Office, the Office of Commonwealth Preparedness and the General Assembly, and still finds time to work with local nonprofits like YMCA's Bright Beginnings Program and to coach soccer for the Kickers kids' club.

As part of his post-college strategy for a career in government, he attended the Sorensen Institute for Political Leadership at the University of Virginia, practically a prerequisite for running for office in the state. When Henrico Delegate Jack Reid stepped down this year, many people urged Sarfo-Kantanka to run. He decided the timing wasn't right, but keep an eye on him. As he says, he didn't go to Sorensen for nothing.