Felice Brothers at the National 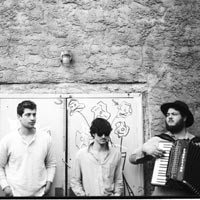 Growing up in the Hudson River Valley of upstate New York, where musicians such as Bob Dylan and the Band once sequestered themselves for inspiration, it comes as little surprise that brothers Ian, Simone and James Felice (with their good friend Christmas Clapton) draw their own ramshackle Americana from the region's musical lineage. After three roughly recorded albums — including a debut LP that was recorded in a chicken coop and distributed during informal performances in New York subway stations — the Felice Brothers' latest album, “Yonder Is the Clock,” continues to shoulder the weight of their organic influences with what is considered to be their best batch of campfire, country-folk tunes. With a melancholic twang and rickety vocal harmonies, the quartet plays the National on Saturday, May 23, at 7 p.m. $13-$15. 612-1900 or www.thenationalva.com. — Mike Hilleary