The year’s most memorable moments in Richmond dining.

The Richmond dining scene has always been a lunatic merry-go-round of openings and closings, but this year seemed even dizzier. Overall the news is good, but 2014 was rocky for some folks. Pane e Vino Wine Bar & Trattoria opened and closed within the year, as did Dash Kitchen & Carry, Inner City Blues, Café Le Ville, TNT Diner Myte, Fancy Asian Gourmet, Al Dente and Monument Coffee and Records. It probably isn’t a record, but that seems like a lot of dreams dashed in short period of time. Here are some of the year’s standout trends and culinary highlights.

Rising from ashes: Sub Rosa Bakery, which closed in 2013 because of fire, reopened in 2014, and garnered national attention throughout the year. Carena’s Jamaican Grille, Amour Wine Bistro and Little House Green Grocery were seriously damaged by fire too, but happily they’ve all reopened. Be careful with the matches, people. 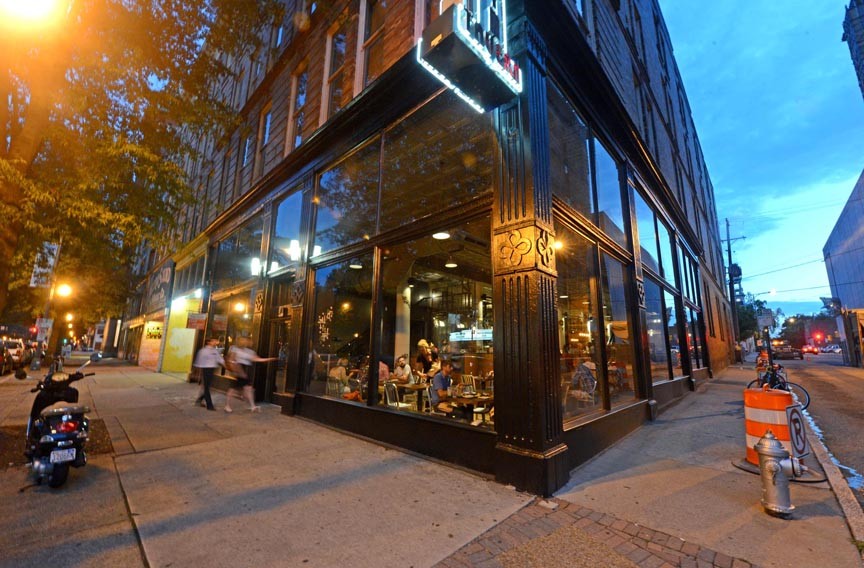 Celebrity visitors: Who wouldn’t want to visit Richmond’s exciting dining scene to see what’s going on? Food Network star Alton Brown managed to eat practically everywhere in town in the single day before his show at the Carpenter Theater, tweeting all the way. The Soup Nazi of “Seinfeld,” actor Larry Thomas, visited Positive Vibe Café’s Souper Bowl to judge a little soup made by local chefs. The charming Vivian Howard of the PBS show, “A Chef’s Life,” did demos and posed for photos at Southern Season, and chef Erik Bruner-Yang of Washington’s Toki Underground popped up at Rappahannock.

“Top Chef “and “Top Chef All-Stars” Mike Isabella liked what he saw and opened a second location of his Washington restaurant, Graffiato, on West Broad Street. And lest we forget, Jerry Seinfeld proved he knew a thing or two about good barbecue when he recently showed up at Buz and Ned’s.

Fried goodness: Doughnuts, of course, were the hottest thing out there, and the trend doesn’t seem to be ending anytime soon. Sugar Shack opened two locations, with another on the way. Dixie Donuts opened a second place in the West End (which recently closed), and Country Style Donuts opened a second shop near a Gold’s Gym west of Parham Road. Doughnut fanatics who anxiously awaited the opening of the Outer Banks’ Duck Donuts in Willow Lawn were rewarded this month. A new Krispy Kreme location opened on South Side, and hundreds of people waited in line to get a dozen hot glazed on the first day.

Sausage season: Charcuterie could have been old news, but it got a shiny new showcase with the opening of Metzger Bar & Butchery in Union Hill. The restaurant specializes in German cuisine, and if you’re German, you know that means sausage. You’ll see hard-to-find weisswurst, a traditional white sausage, and speck, a German ham similar to prosciutto, all made in-house, on the menu there, among other cured-meat choices.

Midnight snacks: Late-night cookie delivery — freshly baked and accompanied by an optional bottle of milk — sprang up unexpectedly as a trend. Three places opened near Virginia Commonwealth University: the first (and local), Red Eye Cookie Co., Harrisonburg’s Campus Cookies, and just recently, the big daddy of them all, Insomnia Cookie, which owns more than 50 locations in the United States.

Westward ho: The West End rose up as prime real estate for independently owned restaurants. The Urban Tavern brought gastropub fare by former Secco chef Tim Bereika to Ridgefield Parkway. Tarrants Café opened Tarrants West in the old Grandpa Eddie’s space. Charlottesville’s Bella’s Restaurant opened another location in Short Pump. And the biggest news of all was an announcement that a second location of the popular Fan restaurant Kuba Kuba would open on Ridge Road in March.

Expansive dreams: It also was a year of expansion, with single-restaurant owners becoming two- and three-restaurant owners right and left. An Bui of Mekong opened the Answer Brewpub and took over the Commercial Taphouse. South Side beer Mecca Brew opened a second location near Midlothian. Johnny Giavos, along with the Black Sheep’s Kevin Roberts, opened Perly’s Restaurant & Delicatessen, and Giavos also opened Betty on Davis with partners.

The Urban Farmhouse added a new place in Church Hill with one coming soon in Scott’s Addition. Ida MaMusu opened a second location, Chef Mamusu’s West African Cuisine, in the old Parkside space. And Lamplighter Roasting Co. took over the Morris Street outpost of Crossroads Coffee and Ice Cream. Boka Tako’s Patrick Harris was busy, opening a second brick-and-mortar extension, this time in the Fan, of his food truck. He also has plans for another on South Side next year. Carytown’s Mom’s Siam opened Mom’s Siam 2 downtown.

Chicken Fiesta brought its much-loved rotisserie chicken to West Broad Street, and McCormack’s Big Whisky Grill opened in the old Texas de Brazil space at Regency Square. Finally, South Side gazed in wonder as star chefs Lee Gregory of the Roosevelt and Heritage’s Joe Sparrata teamed up to open Southbound, a restaurant that delivered everything it promised. S