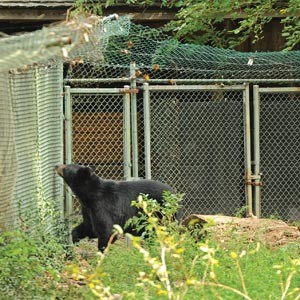 Four years after two black bears at Maymont Park were euthanized after a child was bitten while reaching into their enclosure — sparking a public outpouring of grief and outrage — the fencing around Maymont's bear enclosure still isn't secure, the United States Department of Agriculture says.

The USDA's most recent routine inspection of Maymont, on July 13, revealed “several perimeter fence issues” concerning wildlife exhibits: The park has yet to erect a required 8-foot-perimeter fence around the black bear exhibit, and repairs are needed in the fence that surrounds the entire park, the USDA reports. Also missing is a perimeter fence on one side of the sika deer enclosure.

In addition, two unmanned entrances at Hampton Street and Spottswood Road are “allowing the public unchecked access to the parks and the animals.”

Inspector Doris T. Hackworth also notes in the report that the black bears need a higher ceiling in their individual enclosures, where they live from about 5:30 p.m. each day until 9 or 10 the following morning. The arched roof of each enclosure is 5 feet tall at its highest point. “This means that the animals are unable to stand upright in their enclosures, which is a normal posture for a bear,” she writes.

The inspector gives Maymont a deadline of Oct. 20 to address the deer fencing and the open-access gates, and until Jan. 20 to repair the perimeter fence and raise the bears' roof. A taller fence must be constructed around the bears' enclosure by July 20.

Maymont sent the department a letter on Sept. 30 requesting clarifications of some of the issues the inspector noted, Maymont Foundation Executive Director Norman Burns says. “Until we hear back from them,” he says, “it would be inappropriate for us to comment any further on that.”

Burns says the USDA is willing to work with the foundation to determine the best solutions. The primary intent of the federal animal welfare regulations is to govern the health and safety of animals being exhibited, department spokesman David Sacks says, as well as to prevent “potentially harmful interactions” between people and animals.

In 2006, Maymont's two black bears, Buster and Baby, were euthanized to be tested for rabies, after a 4-year-old boy was bitten when he reached through the fence to pet or feed the bears. After a public outcry, the bears were cremated and later memorialized with a statue at Maymont.