Feature Story: The Roots Above 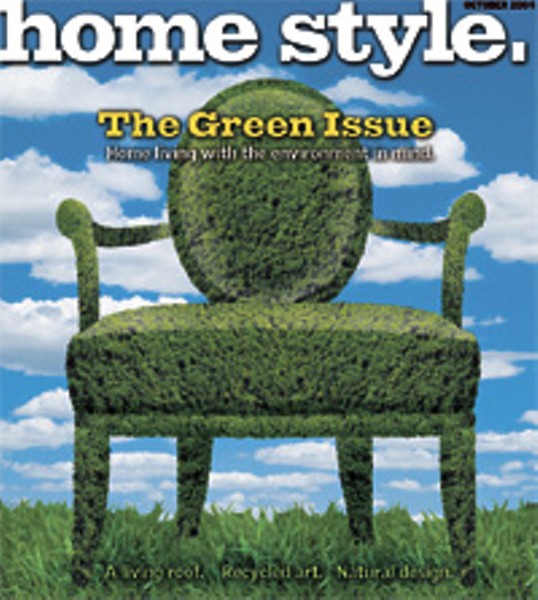 One thing was clear. It was time for a new roof.

As luck would have it, plans for one already were underway. Well before that night, when Hurricane Isabel finished off their existing roof and wreaked general havoc on their Riverside Drive home, Raschke and Creach had made a decision: They would build a living roof.

Referred to as a green roof, an eco-roof, a garden roof or a roof garden, a living roof is composed of a series of layers, engineered to soak up, filter and disperse rainwater. Imagine an enormous, multilayered, industrial-grade lasagna topped with soil and plants. While traditional roofs repel and redirect rainfall in concentrated torrents, living roofs mimic the natural world, absorbing up to 70 percent of any given rainfall and then filtering the excess so that it flows gradually into rivers and streams.

The benefits of these roofs are legion, proponents say. In addition to processing rainwater, they provide superior insulation that can reduce heating and cooling costs by up to 30 percent. The same insulation mitigates noise and retards fire.

Depending on design and capacity, a living roof also can replace a wildlife habitat destroyed for development. And in cities, where acres of impervious paved surfaces raise the temperature and combine with air pollution to cause a noxious condition known as "urban heat island effect," the roofs can actually lower the temperature. Europeans have been erecting them for decades. In recent years, an increasing number have been built in the United States.

Some cities, such as Portland, Ore., and Chicago, provide incentives to developers who build living roofs. Corporations, such as the Ford Motor Company and The Gap, have commissioned green architects to incorporate living roofs into new administrative and industrial plants. Municipalities are installing them on public buildings like Chicago's city hall. Homeowners, particularly on the West Coast, are following suit.

Richmond, where recent events have demonstrated a need for better storm-water management, has been slow to embrace the living roof concept.

Plans are underway for a vast and extensive version featuring 40,000-pound trees and a sculpture garden on the soon-to-be-constructed parking deck on the Virginia Museum of Fine Arts. In the meantime, though, there are only two area examples. The first, planted above the entrance of Carraba's Italian Grill, valiantly attempts to evoke the Tuscan countryside, despite the restaurant's location in the Chesterfield Towne Center parking lot. The second, a kind of demo, was planted last year above the Midlothian garage of Matt Carr, a sales representative for a Chicago-based company that sells living-roof components.

In a strictly residential sense, Creach and Raschke are the area's living-roof pioneers. But their motives, despite the connotations of this status, were not entirely green. "We did like the idea of being good environmental stewards," Raschke says. "But at the same time, we had a flat roof to contend with." Fred Oesch, the Charlottesville-area architect they hired for the project, sums up their decision this way:

"Basically, they had three alternatives," he says. "They could replace the existing roof with another tar and gravel roof. But that would last 15 years at best, and then it would need to be replaced again. Or they could redesign the house from the eaves up and put on a traditional, steep-pitched roof. But the cost of an undertaking like that would be astronomical and would entirely change the character of the house.

"Or, for slightly more money than it would cost to replace the original, and for half of what it would cost to implement option number two, they could do a living roof with the potential to last indefinitely. So in choosing the living roof, they really chose the most practical alternative."

The couple's house, a rambling, 1950s-era contemporary structure with floor-to-ceiling glass windows overlooking the James, was architecturally well-suited for the idea. Designed by the late Richmond architect Marcellus Wright Jr., it was commissioned in 1953 for William Boxley, the owner of a now-defunct printing, engraving and office supply company. Frederic H. Cox, who joined Wright's firm in 1958 and is now one of its principals, refers to the style of the house as "modern cowshed architecture."

Cox doesn't mean this in a bad way. He means it in a rectangular box kind of way. In fact, he admires the design of this particular house. "It's really a nice example," he says. "One of Marcus Junior's better efforts. Very crisp and severe. An elegant, clipped little house."

But Cox, who was looking at the original house plans when he made these comments, hasn't seen the place lately. Over the years, substantial changes have occurred, including the addition of a second wing in 1960 and a third in 1990. Originally built with just one bedroom and two-and-a-half baths, the house now has two bedrooms, five baths, four fireplaces and 5,400 square feet of noncontinuous "little, independent roofs," as Oesch describes them.

These roofs, equipped with a less-than-effective system of gutters and downspouts, had begun to fail by the time Raschke and Creach bought the place in 1997. "That's the one thing you need to worry about," a home inspector told Creach. Damage discovered since has proven his prescience.

Work on the house began in January. In addition to the new roof, various walls, ceilings and windows needed replacing. Because of damage to its ceiling pipes, the radiant heating system had to be dismantled in part and replaced with modern baseboard radiators. This necessitated, among other things, the installation of new plumbing and lighting. New paint and new wallpaper would follow. Creach and Raschke hired the Richmond contracting firm Franko, LaFratta & Farinholt Inc., and settled down to life on a construction site.

Oesch, who was also constructing a living roof for his own home in Schuyler, got down to business. With the help of a structural engineer, he estimated that the new roof would weigh as much as the existing roof plus an additional 15 pounds per square foot. Most houses could support the additional weight, but this one required structural reinforcement to the inside rafter beams before the roof could go forward.

Selection of materials was another key issue. A growing number of companies produce living roof components, each with a slightly different approach. Oesch prefers materials made by American Hydrotech Inc., a Chicago-based firm that uses a seamless waterproofing membrane applied in liquid form. But Creach and Raschke decided on sheets of seamed membrane manufactured by another company, Carlisle SynTec.

After workers removed the tarpaper and gravel from the existing roof, but before they installed the membrane, a protective layer of plywood was installed on the advice of contractor Franko LaFratta. Next, to ensure that the membrane was indeed waterproof, it was left up by itself for several weeks. After that, it was time to install the layers.

The first layer, a heavy, feltlike material that functions as a wick to keep water away from the membrane, went on without incident. Then came the drainage layer, a sheet of recycled plastic with inverted indentations resembling those of an egg carton. Next came a layer of filtering fabric, designed to keep soil from penetrating into the drainage section.

Workers installed the drainage and filtering layers on the same day. Arriving home that evening, Creach noticed something amiss. The indentations of the drainage layer were facing the wrong way. It had been installed upside down.

He tried calling Franko LaFratta, but the company had closed for the night. He tried the installer, but couldn't get an answer. Leaving messages for both, he went to bed but found he couldn't sleep.

"So I got up and looked at a bunch of Web sites to make sure I was right about how it was supposed to be," Creach recalls. "Karen couldn't sleep, either. So at about 1 a.m., the two of us were up on the roof with flashlights just trying to make sure we knew what we were talking about."

The mistake was easily corrected. By early August, the structure was complete and covered with a 3-inch layer of lightweight shale and organic matter. Only the planting remained.

Planting a successful living roof is a precise and complex science bearing no resemblance to gardening on the ground. Not only do you need hardy, drought-tolerant perennials, you also need root systems compatible with the design of the roof and the depth and quality of the soil medium. In the case of Creach and Raschke's roof, shallow, horizontally spreading roots capable of forming a vegetative mat are good. Woody, aggressive roots capable of infiltrating the roof are not.

Other factors also come into play — climate, for example. And geography, sun exposure, plant compatibility and context. Then there are matters like color, bloom time, texture and the seasonal effects on vegetation.

Navigating these issues for Raschke and Creach was Ed Snodgrass, a fifth-generation Maryland farmer whose company, Emory Knoll Farms, specializes in living-roof plants.

"It's a complicated process," Snodgrass concedes. "You're really designing a 60-year garden for people who aren't likely to be up there doing a lot of maintenance. But you learn over time. You start to know plants well enough that you become familiar with their habits and combinations."

Snodgrass chose 14 plant varieties for the roof, all under a foot tall. Among them are eight different kinds of sedum, fall and spring-blooming alliums, pink and white dianthus, a Southwestern prairie succulent that bears purple flowers all summer (Talinum calycinum) and two varieties of a flowering South African succulent called delosperma.

Early one morning last August, Snodgrass arrived in Richmond with 10,800 seedlings in flats and left them on the roof with instructions for placement. Soon afterwards, Mary Dooley and Tara Burrell, employees of the Mechanicsville-based nursery, The Giving Tree, arrived to plant them. The women spent two days on the roof, carefully spacing each seedling exactly nine inches apart. They should fill in nicely, according to Snodgrass.

"The sedums will bloom yellow, white and pink from spring to late summer," he predicts. "Some of them are deciduous and some of them will be evergreen or turn russet during the winter. Different years will have different conditions. This is a very wet, cool year. One plant might look really good in these conditions. And then, at this time next year, when there are different conditions, another plant will look good. That adds interest."

At this time next year, the plants will have grown and spread. The resultant self-sustaining, ecologically advantageous, butterfly- and bee-attracting tapestry of color, texture and bloom will change with the seasons. The sounds and smells of construction and repair will have receded into memory. And it will be safe to play the piano.