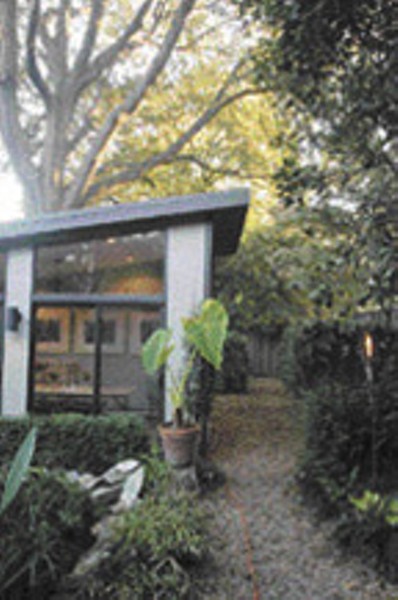 For 30 years McWilliams — who's also a noted gourmand — has lived in a rambling, exuberantly gabled, frame house on a once-sketchy and now gentrified block of West Main Street. For most of that time, he's developed artworks and made prints in a large, upstairs den.

Working intensely with a contractor friend in the spring and summer, he built his dream atelier. It was constructed in just two months. "I was a slave driver," McWilliams admits. "That's why we got it done so fast."

The design was his. "I was always looking at magazines for ideas," he says, seated in his dining room on a recent autumn afternoon and gazing out at the new, modernistic structure with its jauntily slanted roof. "But you never really find what you want in magazines so I came up with my own design. I drew up all the plans."

It came in handy that McWilliams, a North Carolina native who once worked for the Virginia Museum of Fine Arts programs department, has a degree in interior design as well as a master's degree in painting and printmaking, both from Virginia Commonwealth University.

The result of his work is a simple, one room, 10- by-17-foot, glass and concrete structure (with a tool shed attached), that appears as a garden pavilion or folly when viewed from either the main house or its sprawling, wide-planked back deck that contains a hot tub.

The setting is important to the studio's overall appeal. McWilliams' back deck and the lushly planted garden beyond are populated with handsome white, wire chairs designed by noted American sculptor Harry Bertoria. These are set among a barrage of foliage — some plants familiar, like crepe myrtle trees and a wondrously towering willow oak tree, and others more exotic like bamboo and broad-leafed specimens that look borderline maneating.

The studio is a frame structure set atop a concrete base. It has sliding glass doors on the northern and western sides, and large glass windows that rise above these. The eastern and southern outer walls are covered by a fiber/concrete-board material that McWilliams purchased already primed. He painted these exterior surfaces a gray putty color and the wooden trim a shade of dark brown.

Inside, the walls are a shade of light, warmish gray that changes as the light shifts throughout the day.

The studio is sparsely furnished. An L-shaped, stainless-steel countertop was a fortunate find at a yard sale (held at Starch, a downtown, contemporary interior-design firm that since has gone out of business). McWilliams found the base of his large worktable at a local thrift store and replaced the top with a rectangular sheet of plywood.

The overall space conveys McWilliams' rich but minimalist aesthetic. His home furnishings include mid-20th-century classic pieces by Eames and Saarinen. He collects modern pottery. His own art is abstract.

Although McWilliams has yet to fully equip and supply his studio for printmaking, the new space hasn't been idle. It's become a favorite new venue for entertaining. McWilliams already has hosted a number of supper parties there.

The worktable comfortably accommodates up to eight guests. Sometimes, guests serve themselves from the kitchen and navigate the garden carrying their own plates. On other occasions, McWilliams has set up the repast on the studio's stainless-steel counter.

The festive mood is sure to be heightened later this month when McWilliams entertains at his annual Thanksgiving feast.

"I love Thanksgiving," he says. "Christmas is more hectic, all the rushing around and buying things. Thanksgiving is relaxing. It's all about food and getting together the people you like. That's the best kind of holiday."

McWilliams' guests seldom go away hungry. For 17 years he was the proprietor of Mainly Pasta, a popular, gourmet takeout and wine shop on West Main Street.

He says he opened the store on a whim. "I'd been going to New York City pretty regularly and noticed all the carryout food places," he says of his foray into fine foods. "I thought, Richmond is ready for a fresh pasta store. It was an instant hit, and business just got better and better."

He had never cooked professionally, but he wasn't totally surprised at his success. "I'm a strong believer that things are floating in the air and you just have to pick up on them," he says philosophically. (He sold the business in 1999. Mainly Pasta is scheduled to open under a third ownership later this year).

McWilliams' guests can expect a traditional Thanksgiving spread, he says. "I always do the turkey [cooked on an outdoor gas grill after soaking it in water and seasonings overnight] and then add interesting side dishes."

"I have to add something different every year," McWilliams says, "because I have the same people every year."

For dessert, however, his guests can expect a perennial favorite, a Frangelica pumpkin cheesecake. The meal will be accompanied by a series of wines.

Although the Thanksgiving menu will be grounded in updated tradition, the table setting will have a decidedly modernist — and autumnal — twist. McWilliams collects Raymor pottery, a rare, handmade design that appears organic in a Sputnik kind of way, and has finishes in rich earth tones — green, off-white and golden brown. The line was manufactured for just one year (in 1950) by Roseville Pottery, a studio more famous for its colorful and busy floral patterns. The designer of Raymor was Ben Siebel, a student of 20th-century design, and home furnishings guru Russell Wright. McWilliams' stainless-steel flatware is a Russell Wright design reissued by Oneida. He'll use simple stemware for both wine and water.

As darkness falls on the Thanksgiving scene, guests will gaze out over the garden. Its permanent lighting will highlight not only the plants and trees, but also an impressive, skeletal, metal sculpture by Richmond-based artist Tom Chenowith. Gas torches will add extra warmth and glow.

Amid his preliminary culinary preparations for the holidays, McWilliams receives some good news about his latest printmaking project: The Asian paper he has been anxiously seeking has been located. "I found a supplier in Asheville, and the ink is on the way," he says excitedly. "So I'm ready to go."

The new studio will see considerable action in the coming weeks.