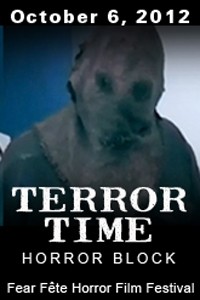 If you love classic horror films, then this is the block for you. The 2012 Fear Fête Horror Film Festival presents the Terror Time Block featuring three films from the Classic Horror genre:

Plush (10 minutes, New Mexico) Kathy is a mature, professional woman who still sleeps with her cuddly teddy bear Vincent. One night, when a burglar invades, Kathy's home comes alive with magical surprises. To his horror, the intruder learns that not everything is as it seems and Vincent may not be so cuddly after all.

An Evening With My Comatose Mother (33 minutes, Utah) Dorothy Pritchard thought she had it easy; house sit for the wealthy Poe's on All Hallows Eve while collecting a cool paycheck. That was, until, she was introduced to the Poe's rotting, comatose mother living upstairs.

DeadTime (97 minutes, England) A Birmingham-based band are ordered by their unhappy record company to an old warehouse; the goal being to re-start their ailing careers with a kick-ass new promo video. Unfortunately the band and their entourage find themselves targets of a mysterious knife-wielding maniac, haunted by the voice of Satan, and out for revenge.