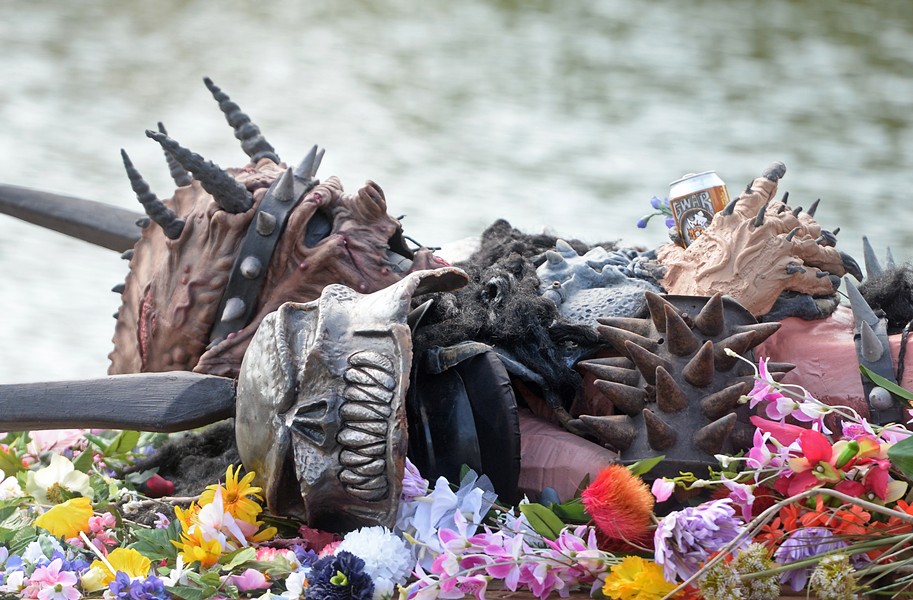 Members of the heavy metal band Gwar stole their late lead singer Dave Brockie's artwork, bass guitars and cremated remains, and refuse to return them to his family, the musician's father claims.

Brockie, who formed Gwar in Richmond in 1984, and performed as the character Oderus Urungus for more than 30 years, died March 23, 2014. An autopsy performed by Virginia's state medical examiner's office later concluded the cause of death was acute heroin toxicity.

In a lawsuit filed April 2 in Richmond Circuit Court, William Brockie, the administrator for his son's estate, says Gwar's members are trying to capitalize on the singer's death, and names drummer Brad Roberts, aka Jizmak Da Gusha, as the leader of the conspiracy.

In the lawsuit, Brockie says that in the months following his son's death, band members pilfered guitars, artwork, a gold record, tour ephemera and other personal effects from his son's home, and padlocked them in an office at the band's Slave Pit Inc. headquarters.

The lawsuit says Roberts also made off with David Brockie's cremated remains, and that when the singer's father attempted to retrieve them, he was made to wait across the street from Slave Pit Inc. until he was given a small fraction of his son's ashes, "delivered in a used plastic bag with Discover credit card logo on it."

William Brockie also says in the lawsuit that his son was never compensated for performing on Gwar's 2014 Far East tour of Asia and Australia.

He also says that following his son's death, various members of Gwar and their lawyers tried to wrest control of the estate from him, falsely accusing him of failing to accept responsibility for administering his son's estate.

After Brockie's death, his bandmates set up the charitable "Dave Brockie Fund" in his honor, according to the lawsuit. According to the band's website, the charity is "a resource for artists in the fields of music, film, literature and all visual arts who cannot find funding through mainstream channels," and seeks to preserve "the legacy of Dave's body of works."

Brockie's father alleges that he didn't consent to his son's likeness being used for the charity "at the discretion of Slave Pit Inc." or for memorial T-shirts and merchandise sold during the 2014 Gwar-B-Q concert last summer at Hadad's Lake in Henrico County.

Brockie seeks $1 million in compensatory damages, punitive damages, and injunctive relief on claims of conversion, breach of contract, and unauthorized use of David Brockie's image.

An email to Gwar member Brad Roberts was returned as undeliverable and he was unreachable by phone. A call to Gwar member Bob Gorman went to voice mail. William Brockie is represented by Christopher Malone and Zachary Cohen of ThompsonMcMullan PC in Richmond.

We have not yet seen the actual lawsuit papers, and thus cannot comment on the substance of the lawsuit brought against GWAR by Dave Brockie’s father, William Brockie, but we can say that the claims in the Style Weekly article are false. We did not steal Dave Brockie’s ashes, or anything else that belonged to him. In fact, all of the items mentioned in the article, including Dave’s ashes have been available to his attorneys for weeks. At all times, and under very trying circumstances, we have acted in good faith to honor the wishes of our dear friend. Dave left no will or instructions for final arrangements, and so we have done the best we could to honor what we believe Dave Brockie would have wanted.

The accusation concerning Dave’s ashes is particularly troubling for us. Following Dave’s passing, the first thing we did was notify his father, who signed over Dave's body so we could have him cremated. We were told by Dave’s father that he did not want to be involved in making Dave’s final arrangements. For this reason, Slave Pit assumed that responsibility, paying for his cremation, arranging two memorial services (one public and one private), and purchasing a plot for Dave in Richmond’s famed Hollywood Cemetery. Dave’s father did not attend either of the services held for his son in Richmond.

Over 30 years of working and living with Dave, several of us had heard him say that he wished for his ashes to be kept at Slave Pit, so he could “keep an eye on GWAR” while we worked. In the weeks following his death, we developed a plan for a memorial fund that would raise money to honor Dave’s memory with a statue in Hollywood Cemetery and work to continue his passionate support of the arts. We felt strongly that a portion of his remains should live at the site of his proposed monument in Hollywood Cemetery. When William Brockie later approached us, we released a portion of the ashes at his request, so he could spread them in the location where Dave’s brother and mother’s ashes were dispersed.

Concerning the other allegations in the article, there was certainly no effort on the part of anyone in GWAR including drummer Brad Roberts to steal or hide Dave’s belongings and personal effects either from his home or office. Dave, like the rest of GWAR, was paid upfront for his final leg of touring with GWAR. The claim that we failed to pay his share of royalties from Slave Pit Inc. is false, and we have the records to prove that. We have been in correspondence with William Brockie and his lawyers for months. They have access to the band’s financial records, and Dave’s payments and share of royalties are clearly recorded. Likewise, William Brockie’s attorneys have an itemized list of the small collection of Dave’s art and belongings at Slave Pit. There was never an attempt on the part of Slave Pit to withhold these items from William Brockie. When his attorneys finally identified the particular things they wanted, we made arrangements to return them immediately. Dave’s remains, as well as his belongings, including the instruments and the gold record mentioned in the article were given to our lawyers, who in turn notified the Brockie estate that they could retrieve them weeks ago.

The Dave Brockie Fund did indeed raise money toward our initial goal of building a monument to Dave in Hollywood Cemetery. Unfortunately, its mission has been put on hold because William Brockie’s and his attorneys claim that the Brockie estate should have control of the Dave Brockie Fund and the money contained therein. If we are ultimately unable to use the funds for the purpose for which they are raised, the funds will be returned to all contributing donors.

Finally, our manager, Jack Flanagan has been unjustly accused of signing a bogus release. At the request of our attorneys, he signed some paperwork to make his position clear on what he thought Dave would have wanted, which is something that the law of Virginia specifically asks for, given Jack’s relationship with the band and with Dave. There is nothing bogus about this.

Dave Brockie was our friend, peer, co-worker, and our family. We want to preserve the legacy of one of the greatest singers in rock and roll history. There is no “conspiracy,” no bad faith, no theft, no graft, and no ill will. We trust our fans will see through this, and we will be able to get back to work on the one thing we all know Dave Brockie loved; GWAR.