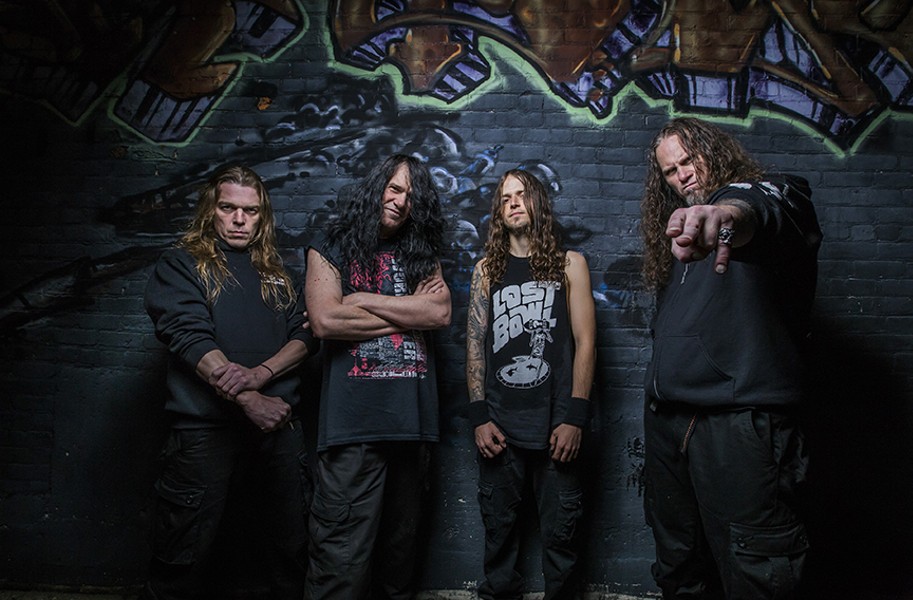 If someone were to ever build a death metal hall of fame, Morbid Angel should have its own wing. Formed in North Carolina in 1984, members of the band — along with peers and contemporaries Death, Obituary and Sadus — were the architects of the new genre that crucially gave the sound of San Francisco thrash a heavier, malevolent makeover.

Along the way the veteran group has weathered shifting musical trends and personnel shakeups while never compromising its vision or forsaking a die-hard fan base.

The band’s most recent album, “Kingdoms Disdained,” is easily its strongest in two decades. I spoke with bassist and vocalist Steve Tucker, who recently rejoined the band following a 14-year hiatus, in advance of the band’s show at the Broadberry on Dec. 16.

Style Weekly: “Kingdoms Disdained” was released in December 2017. Are you working on any new material?

Steve Tucker: Not at all, man. Right now we’re still just playing the hell out of this album, dude. I personally really love the album and I love playing the songs live, and that’s what we’re continuing to do. We’re getting ready to go out right now with Incantation and Watain, and that should be sick as hell.

How does the division of labor work as far as songwriting goes? Do you and founder and guitarist Trey Azagthoth collaborate and trade ideas over email, or does it mostly get done when the band gets together?

All of it, dude. Trey writes stuff on his own, I write stuff on my own, we collaborate on stuff through email, and then when we get in a room, things sort of become finalized.

Where do the lyrics and vocals come in during the writing process?

If it’s one of my songs, it’s the last thing I do. With Trey’s songs, I just listen to them so many times until an idea forms in my head, and I honesty can’t explain the process more than that. I just keep listening to the songs, and sometimes things happen immediately and sometimes I have to keep listening and eventually things come to me.

You play on some of the heaviest and most uncompromising Morbid Angel albums. Do you think you bring this vibe out of Azagthoth? Do you think he writes with your style in mind?

Well, I work with what Trey gives me, and I think he just writes what he writes. But I also think Trey kind of knows what to expect with me, man. I think he knows that if there are two options, I’m probably going to take the more aggressive one.

You’ve left and returned to the band several times, going back to 1998’s “Formulas Fatal to the Flesh.” Do you guys tend to pick up right where you left off, personally and musically speaking?

Yeah, man. The thing about it is there has always been outside shit going on that caused me to have to take breaks, but once we get together there’s still a desire to work together and to make music, and it just falls right into place. Honestly, it’s weird to me that so many years went by between [2003’s] “Heretic” and “Kingdoms Disdained” because as soon as we started working on things, it really didn’t seem like time had really passed very much at all. Unless, of course, I looked in the mirror. [Laughs].

Do you keep up with new death metal bands that have been influenced by Morbid Angel?

It’s one of those things where when you tour with other bands you get hip to them and what they’re listening to. I don’t go seeking out bands at all. Every music I’ve ever loved in my life has fallen into my lap. But there are a lot of great bands out there that are younger. On the last tour we toured with Necrot and Blood Incantation, and, to me, you couldn’t ask for better death-metal bands.

Metal bands, especially legacy acts like Morbid Angel, seem to inspire more die-hard followings than bands in other genres. Does it seem like metal fans are more loyal, or is that just my impression?

Metal fans are definitely more loyal, dude. I think once you’ve touched ‘em, and once you’ve really done something for them, they just hold you in their hearts forever, dude.

How has streaming affected a band like Morbid Angel?

Man, if the music business was shit in 2000, now it’s dehydrated, sun-baked shit. You know what I mean? The music industry is just cold and dirty and ugly and no one gives a fuck. No one wants to give you anything, so you better fight your ass off to get whatever you can.

Morbid Angel performs with Watain and Incantation at the Broadberry on Monday, Dec. 16. Doors open at 7 p.m. and music starts at 8 p.m. $30-$35. thebroadberry.com.