These occupiers spend an inordinate amount of time decrying the “1 percent who own 50 percent of everything” but very little time explaining their ultimate objectives. 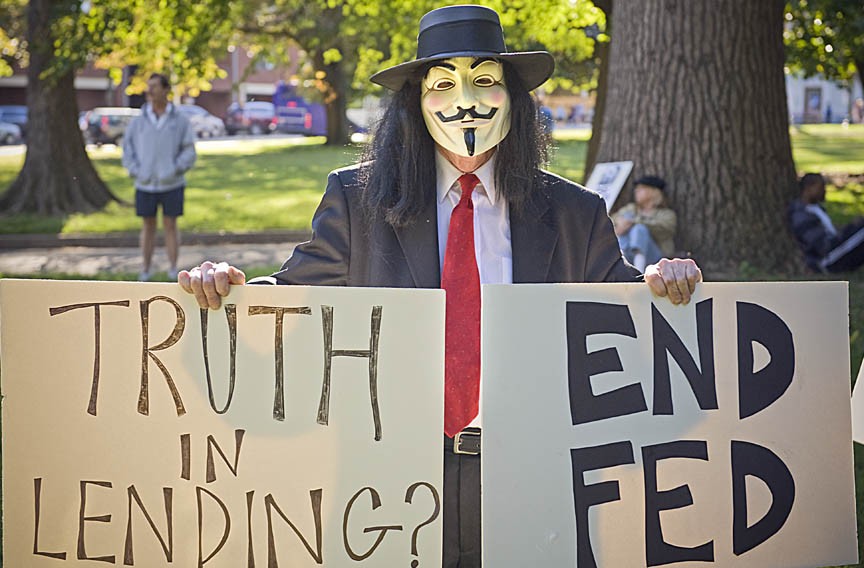 The occupy party is bringing its fuzzy math to Richmond.

The recent creation of Occupyparty.com and Occupyrichmondva.com, along with a local Facebook page, declares the party’s intentions to “collectively voice our disapproval of the intermeshing of government and corrupted capitalism. We unite as 99 percent of the American population. …” These occupiers spend an inordinate amount of time decrying the “1 percent who own 50 percent of everything” but very little time explaining their ultimate objectives.

And “take from the rich” isn’t an objective.

Surely this occupy party means to evoke the friendlier, socially relevant occupations done by their grandparents, who in the 1960s tried to levitate the Pentagon and smoked cigars in the Columbia University president’s office. I dare suggest too that most of those calling for the occupation of Wall Street (and Kanawha Plaza) are the ones who protested the loudest at what they considered America’s occupation of Iraq in 2003.

True, the nouveau riches of Wall Street are fat, slow-moving targets, but do the protestors propose similar disdain on the old money of Richmond by coming here? Blame the occupiers’ only consistent but unfocused message — that the rich are bad, regardless of the manner in which that wealth was accumulated, and if they dress well and work in a bank they need to give up some of that wealth and pass it around to those people who somehow can afford to take off week after week to stand in the street and chant about how disenfranchised they are.

Richmond occupiers are remiss to focus on Main Street or Kanawha Plaza (where a historically small percentage of Richmond’s wealth is generated). They should instead consider occupying the manicured and walled lawns of Windsor Farms, Cary Street Road, Old Locke Lane and others, where the real money — comprised of fourth-generation Confederate daughters, Bal du Bois offspring of pre-Civil War tobacco magnates and FFV descendants — would peek worriedly at the occupation unpleasantness from behind tailored curtains.

The Wall Street protestors shoot pictures and videos with iPhones made by Steve Jobs, a demanding corporate fat cat who ran a multibillion-dollar megacorporation, yet they’re silent on his role in their despised industrial-capitalist complex apparently because he dressed a lot like them and made hipster-approved products. Would he be afforded the same courtesies if he’d worn a suit and maintained an office on Wall Street?

And sadly, Jobs is gone. One less corporate bigwig to hog the wealth and not pay his fair share. And speaking of paying fair shares, how many of these protestors fall into the 48 percent of Americans who pay no income tax?

Billionaire Warren Buffet also seems to have curried favor with the anti-capitalist occupy crowd with his disingenuous complaints of personal low tax rates. Why Buffet thinks he’s bound to the tax tables is a mystery, as he can stroke a check to the Treasury Department over and above what he’s required to pay any time he wants — he’s just chosen not to. He’s also chosen to pay himself not with a W-2 salary but with capital gains, which he knows are taxed at a lower rate. He’s not stupid, but he sure assumes we are.

shrewd Democrats hope that they can ride these protesters’ anti-banking sentiments to charge that Republicans are the tools of the corporate fat cats for favorable 2012 election results, they’re chanting up the wrong tree. Republican corporate cronyism pales in comparison to the industrial-strength back-scratching practiced daily by the current administration. Have the protestors forgotten in their ill-focused rage that it was Democratic candidate Barack Obama, not John McCain, who enjoyed the most financial contributions from the banking, hedge-fund and securities industries during the 2008 campaign? A study by the Sunlight Foundation’s Influence Project shows that President Obama has received $16 million and counting in contributions from Wall Street, more than any other politician in the past 20 years, including George W. Bush. A majority of House Democrats, not Republicans, voted in favor of the Troubled Asset Relief Program, and Treasury Secretary Tim Geithner’s financial bailout plan was criticized as “strikingly favorable to Wall Street.”

Revelations like these don’t seem to faze the anti-capitalists descending on Richmond, and highlight the hypocritical, muddled message and sometimes devious techniques the occupy-party organizers and followers espouse. An Occupy D.C. organizer admitted to paying a group of Hispanics to attend, and Occupy Sacramento organizer Anthony Bondi admitted to not knowing the reasons they were there. A New York occupier took a dump on a police car. The old days of demanding an honest day’s wage for an honest day’s work is being replaced by a more vague “people before profits” mantra that seems to circumvent the day’s work required to enjoy the comfortable American lifestyle desired by the protestors.

Yes, there’s gross inequity in America’s executive-to-employee compensation ratios; however, a more direct approach may start with petitioning corporate stockholders who approve such mammoth salaries, and then go head-to-head with the White House administration (if it’s not off on another ritzy vacation) who not only bailed out these corporate jet-owning bigwigs but also benefit the most from their palm-greasing financial contributions.

Dale Brumfield is a payroll services broker and writer living in Doswell.