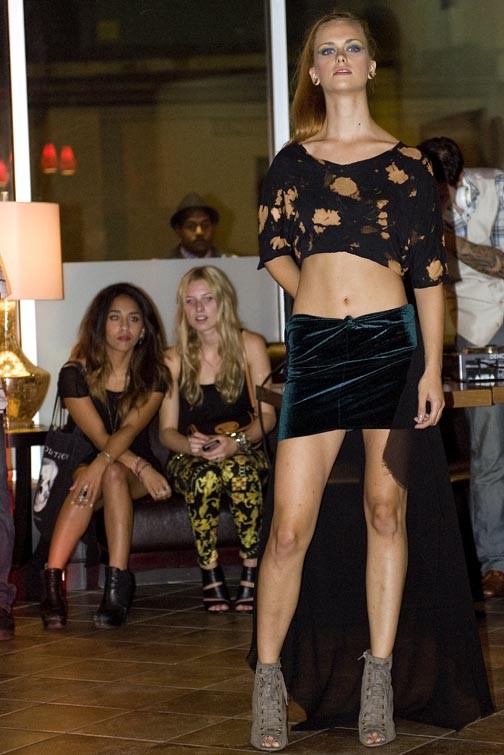 New fashion shows, blogs and lines are popping up this season, making Richmond that much more stylish, just as Virginia Commonwealth University's fashion majors go back into session. The past year has seen Richmond featured in an Urban Outfitters video shoot and Ledbury spotlighted in GQ magazine. What do the next few months hold?

The university's Fashion Week comes around in April. But instead of waiting for fresh offerings from its students, Steven Ramirez is filling the void. A creative advertising major and graduate of Manchester High School, Ramirez has christened Selba (2416 W. Cary St.) as a fashion hot spot on the first Thursday of almost every month. That's when he and his group, Richmond Armada Intelligence Network, show the work of fashion folks from across the city, with a particular focus on VCU designers.

"Part of the reason we're doing this is to make sure talented people at VCU get good jobs after graduation," says Ramirez, who plans to graduate in 2014.

Since October 2011, the network, known by the acronym RAIN, has united designers with models, photographers and stylists to put on shows, hold photo shoots, network and "tie the loose ends" between creative types, Ramirez says. The previous two shows at the sleek restaurant and lounge took place in May and July. Collars, bow ties, bleached denim, menswear for women and tiny patterns prevailed.

RAIN commemorated its first anniversary with a fashion show Sept. 6, with performances from a dance crew, pianist and vocalist Nick Storm and ballet dancer Teddy Gregson. The network collaborates with Quail Bell Magazine on Oct. 4 to produce Once Upon a Time II: Forgotten Folklore, a fashion show that celebrates the city's classic stories such as the Richmond vampire, Poe's "The Masque of the Red Death" and the ghosts of Pocahontas Parkway. (This writer is editor of Quail Bell.) The final show for the season takes place Nov. 8, also at Selba. Information at facebook.com/R.A.I.N.RVA.

Good Ones Take the Spotlight

The city's clothes horses have been buzzing about the Good Ones. First released in July, this online-only, one-page magazine features interviews and photographs of Richmonders known for their unique style. The first subject was Ali Breslin, 26, a stylist who cut her teeth at Need Supply Co. and recently moved to New York City as the wholesale accounts and press manager for high-style clothing and jewelry company In God We Trust.

The magazine is filled with coy questions such as "What's in your bag?" and "What were you doing two hours ago?" While online-only, the Good Ones mimics the clean, photo-centric look of print. Issues also are available for download as PDFs.

Who's the next subject? Kate Jennings of Na Nin Vintage. And as for the third, the magazine's creators — Duy Nguyen, Kevin Trinh and Will Godwin — invite Richmonders to contact them "if you're a designer, photographer, blogger, dancer, or pants wearer interested in being featured for an upcoming issue. We don't bite. Unless of course you're a chef." thegoodonesmag.com.

One of Richmond's best-loved fashion icons is Brian McDaniel, who snaps candid shots of the city's most fabulous and posts them on his Tumblr page, Dirty Richmond (dirtyrichmond.tumblr.com). McDaniel also recently became creative content coordinator and blog writer for Ledbury, the men's apparel boutique at 117 S. 14th St. in Shockoe Slip.

Now this connoisseur of chic has another claim to fame: a line of "hand re-sewn vintage skinny" ties called Park and West. McDaniel finds old ties at thrift shops and then readjusts them for a narrower look.

McDaniel's own fashion frustrations inspired him to start the line. "I'm a pretty skinny guy," he says, "so finding ties that looked right with the width of my shirt was always hard." He also loves working with his hands: "I sit at a computer at work most of the day, so it's rewarding to come home and do something crafty."

So far McDaniel has been doing custom orders, but he plans to sell at shows and festivals in the near future. His ties retail for between $15 and $25. McDaniel's roommate, Bree Davis, also has started her own line of bow-tie necklaces for women, called a Stitch in Tie. Her creations can be found on the online craft marketplace Etsy. S