VCU's Strut fashion show is canceled with an uncertain future. 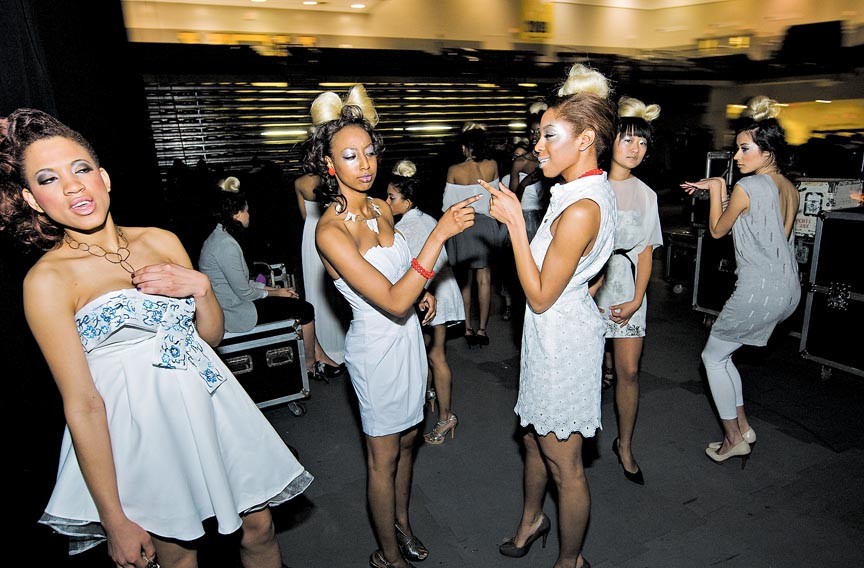 The volcano has ravaged the tropical island. Ash covers everything in sight, and the survivors, clad in rags, survey the damage. A lone violinist plays a somber melody.

That was to be one of the scenes in this year's Strut, a student fashion show held annually at Virginia Commonwealth University. But while students were pulling together the show, university officials pulled the plug, citing scheduling concerns.

While officials say they want to reschedule the event in the fall, they also say that it isn't set in stone. Students involved in Strut are skeptical that a fall show will really happen, and say they were told by one official that the event was cancelled indefinitely.

More than 100 students work on the event, which combines fashion, choreography and music for a night of entertainment. Strut normally draws 1,000-2,000 spectators, and was going to feature a natural-disasters theme.

Strut's president, Jazmin Tanner, says that in May she booked the Siegel Center for March 31. When she checked the booking later last year, she found that Strut no longer had the arena reserved. Tanner says she met with Carolyn Whittier, VCU's associate director for programs and educational services, to talk about the booking.

"[Whittier] said it was never booked for March 31," Tanner says. "Then she [later] said that the Siegel Center needed that date open in case university went to the Final Four."

Whittier contends that March 31 was requested by Strut, but never confirmed. Because the Siegel Center staff couldn't confirm a date for Strut, the university booked the Landmark Theater instead. Tanner says the Landmark was inadequate because its bolted-down seats make viewing a runway difficult.

Whittier offered three options to have Strut at the Siegel Center: hold the event on Easter, the day before Easter, or cancel. Strut chose the day before Easter. Whittier says that no one realized it was Easter weekend at the time, which was a factor in the spring cancellation. Whittier requested Strut trim its budget, which it did, from $85,000 to $54,000.

The university then informed students that Strut would be moved to the fall. Members were angry because the new date fell in a different academic year, after some students involved will have graduated.

Whittier says moving Strut to the fall would help balance out the school's annual events and put less of a strain on resources. She notes that last year's Strut had to move by a day because of the success of the men's basketball team.

"It's all about logistics and also where to place Strut in the cadence of the academic school year," Whittier says.

Strut members responded that having future shows in the fall was fine, as long as they could keep this last show in the spring. They were told they'd have to plead their case to Reuben Rodriguez, vice provost and dean of student affairs.

Rodriguez told them that the show wouldn't be postponed to the fall, but indefinitely, according to Tanner. Rodriguez declined an interview request, referring all questions to Whittier. Whittier says she wasn't at that meeting, but that she heard the same thing.

After the meeting with Rodriguez, Whittier met with Strut organizers, asking members if they'd be interested in a fall show. Tanner says students responded that they would, as long as they could be guaranteed that a show would take place and meet with Whittier, Rodriguez, and the vice provost for student affairs and enrollment services, Henry Rhone.

"We wanted them all in the same room because they all give different answers," Tanner says. "We don't want to put in work for something that won't happen."

Whittier says that students didn't request a meeting with her, Rhone and Rodriguez about the fall Strut, but about reinstating the April date, which was declined. She says she's been in contact with Strut members to see who will be interested in working on it for the fall. Because the meeting with university officials hasn't happened, Tanner says there won't be any discussion among students about a fall show.

Tanner believes that one reason the university cancelled Strut is because of a perceived conflict with the fashion department's annual Juried Fashion Show, which is open only to fashion majors.

"I feel like the university let us down," says Caitlin Alfred, Strut's fashion designer. She says she thinks the cancellation is partially because of finances. Alfred says that this was one of the few ways for her to get a foothold in fashion: "It was like someone closing a door in my face."

Though Strut is meeting with university officials at the end of this week, Tanner says she isn't getting her hopes up. "I'm angry because I know how much hard work everyone put into this," she says, "and we have nothing to show for it." S