ADA plays host to the dream works of Jenny Kendler. 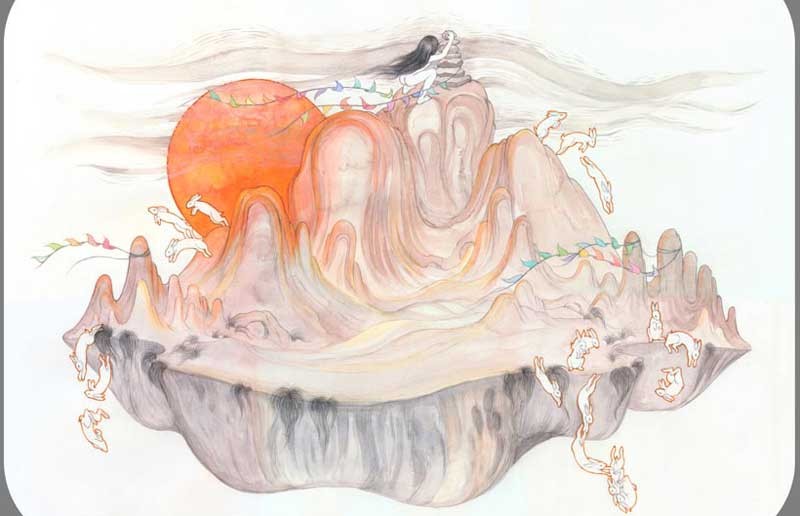 The Chicago-based environmental artist Jenny Kendler has returned to her Richmond hometown to show new multimedia works at ADA Gallery. "Archipelago" features drawings, prints and sculptural installations exploring the complex relationship between humans and the natural world, through a unique and confident feminist-naturalist perspective.

Kendler's use of myth, magic, and fantasy as the language of her exploration creates an otherworldliness from the one for which she is concerned. With witty, slightly shocking drawings such as "Sibling Rivalry (Love Bites)" or "Hungry for More (Nature, Nurture)" the shifting spectrum of gender and human sexuality abuts the nuance of human connection, and origin, among the laws of the natural world. Humans aren't distinct from nature, though we like to think ourselves separate, even superior. Kendler seems to wonder what this means for the health of the human psyche as much as for the health of the environment.

Among the shelf fungi painted with pastel rainbows holding milkweed seeds and the drawings of floating terrains with naked women (think Led Zeppelin's "Houses of the Holy" album cover) and the pendants with painted or hand-cut extinct animals — a continuity of theme, element and style pervades "Archipelago." It's as if each piece overlaps in a long mysterious dream, bringing childhood innocence and the earth into a single narrative verse mostly forgotten but still familiar enough to sense.

"Desert Solitaire" depicts a girl and reptiles, all haloed in rainbows as a hummingbird sips nectar from the girl's ear. Rain clouds and a tree with brightly colored banners, like Buddhist prayer flags, build in a traditional pyramidal composition while ultimately remaining unhinged from any solid ground. This imagery is the poetry of biology and ecosystems.

Kendler's work focuses on "issues like extinction, habitat loss, mutualism and climate change," making environmental activism as much a part of Kendler's art as the visual images she creates. As an artist and entrepreneur, Kendler is co-founder of OtherPeoplesPixels, an artist web service and an arts and environmentalism grant-making enclave. She's also co-founder of the Endangered Species Print Project, where limited-edition prints are created by contributing artists to raise money for endangered species. Kendler donates a portion of all her art sales to environmental conservation and biodiversity efforts. S

"Archipelago," an exhibition of new multimedia works by Jenny Kendler, will be on view at ADA Gallery through Dec. 31. For information and gallery hours, visit adagallery.com.