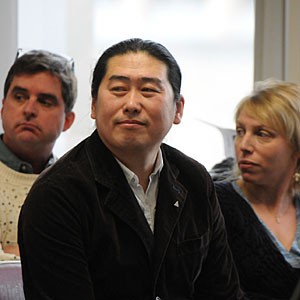 Fanhouse restaurant owner Sunny Zhao won his first round with the Fan District Association on Monday.

Zhao flashed two thumbs-up after the Feb. 7 meeting of the city's Planning Commission, which voted to let Zhao keep the first-floor bar he built without a permit a year ago. The illegally built bar drew the ire of the association after some neighbors said Fanhouse had become more of a watering hole than an upscale restaurant.

“People make mistakes,” says Zhao's attorney, William H. Shewmake. He says Zhao didn't know he needed a building permit and wasn't aware of the special-use permit attached to the property, which places strict conditions on its use.

Charlie Diradour, chairman of the Fan District Association's zoning and ABC enforcement committee, says he's been trying to broker a compromise since June. “I want Mr. Zhao to succeed,” he says.

Several Fan residents spoke at the hearing, mostly in opposition to Fanhouse. Some said it was a nightspot where rowdy patrons congregated -- shouting, laughing, cursing and keeping them awake. Others described Fanhouse as a nice restaurant they want to keep in the neighborhood.

Commission member Doug Cole said he “went undercover” last Friday night and asked a Fanhouse bartender -- unsuccessfully -- for a Jell-O shooter. “It wasn't that type of place,” he reported.

In the end, Zhao triumphed. City Council will make the final decision on the bar at its meeting Feb. 14.