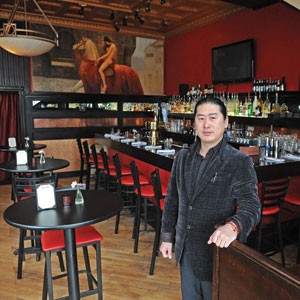 Here's a Zen question to ponder: If a restaurant has an illegal bar, does that mean it's a bar?

That's the dilemma facing restaurateur Sunny Zhao, owner of the Fanhouse, a one-year-old restaurant at Floyd Avenue and Robinson Street. Zhao is battling the Fan District Association over a bar he built without a permit.

Zhao says he's trying to run a high-class restaurant — “a really nice place for grown-ups to hang out.” The association says it's a noisy nightspot.

“The problem is, it seems the personality of the place changes about 10:30 at night,” says businessman Charlie Diradour, chairman of the neighborhood association's zoning and ABC enforcement committee. Fanhouse closes at 1 a.m., Zhao notes, earlier than other neighborhood spots. Nearby hangout Buddy's, which is in a building owned by Diradour, closes at 2 a.m.

With its sleek red-and-black interior, painting of a nude Lady Godiva and secret-recipe crazy dumplings, Fanhouse made waves ­and won over food critics when it opened in February. As part of Zhao's renovations, he built a bar on the first floor without requesting a building permit from the city. A few months later, Zhao started preparing to build an outside patio.

That's when a few neighbors “flipped out,” he says. The city issued a stop-work order for the preparatory patio work because Zhao had no permits and had violated the terms of the special-use permit attached to the property.

Zhao says he didn't know about the existence of the special-use permit, which imposes strict conditions on the use of the building as a restaurant. The permit, originally issued in 1988, has governed all Fanhouse's predecessors: Vendalia, Konsta's, Carlton's and Verbena.

Now Zhao's going to City Council to get approval for the first-floor bar. He says he's tried to make amends by dropping the other proposed changes: adding a patio in front, turning the attached property on Robinson Street into an indoor smoking lounge and extending the upper-level floor to add more seating.

The neighborhood association has voted to oppose the changes Zhao wants to make, Diradour says, and will present its case to the city's Planning Commission on Feb. 7 and to City Council on Feb. 14.

Zhao says neighbors have unfairly characterized his restaurant as a dive, a nightspot and a bar. “What kind of bar has a $125 bottle of wine?” he asks. Fanhouse opponents have even used Facebook against him, Zhao says, by publicizing photos of patrons dancing (impromptu, he says) and his advertised drink specials (something he no longer offers, he says). Alcohol sales are necessary to keep the restaurant afloat, he says.

Diradour says he believes that Fanhouse can succeed as a restaurant without all the late-night bar patrons.