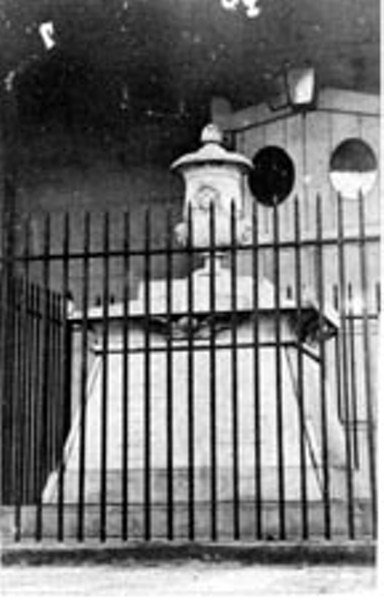 Monumental Church, which sits on the original site of the Richmond Theatre at 1224 E. Broad St., represents a significant event in Richmond history. The theater fire of 1811 was a tragedy of enormous scale. Former Gov. George W. Smith, sworn into office just 21 days earlier, died while attempting to rescue theatergoers, according to newspaper reports. The audience was a who's who of Richmond's upper crust.

A lighted chandelier ignited part of the stage scenery at the beginning of the second act of "Raymond and Agnes: The Bleeding Nun." Flames erupted and chaos ensued, according to reports. Audience members crammed the long, narrow exit; women and children were trampled. In the following months, religious leaders across the country used the incident to denigrate live theater, which they saw as the devil's work.

Since the remains of the victims couldn't be removed easily, officials at the time decided to build a memorial directly atop the site of the theater. Architect Robert Mills designed both the urn and Monumental Church, built directly behind the memorial.

A documentary about the history behind the urn and the church is being filmed to commemorate the event.

Originally, says Donald Charles, executive director of the Historic Richmond Foundation, he thought vandals had knocked over the urn. "The way it had fallen down," he says, "it just looked like somebody … gave it a whack."

The real cause turned out to be natural. The urn was sculpted from white Carrara marble, which is known to deteriorate over time, says Mimi Sadler, an architect with Richmond-based Sadler & Whitehead Architects and a member of the APVA board.

The new urn — which will be constructed at the Science Museum of Virginia — is being built from the more durable Thasos marble, a "brilliant white homogenous marble," Sadler says. — Scott Bass