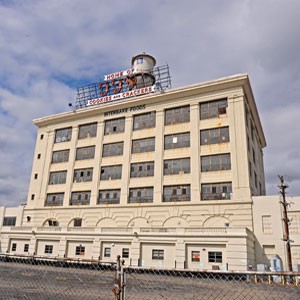 The city has condemned the former FFV-Interbake building near Broad Street and the Boulevard.

Responding to complaints about homeless people and skateboarders using the building, city inspectors visited last Wednesday and found that it was “open to entry and the elements,” city spokesman Mike Wallace says. Doors and windows were broken.

“Utilizing the normal code-enforcement process,” Wallace says via e-mail, “the property was condemned so that the property could be secured.”

For decades the factory filled the area with the intoxicating smell of cookies (and occasionally the noxious smell of a burned batch). Interbake, a major maker of Girl Scout cookies, moved its operation to Front Royal in 2006.

In 2005, Washington-based developer Douglas Jemal bought the building and its 6.3-acre surroundings for $6.7 million. Various development proposals were floated, but nothing stuck.

In August the Richmond Times-Dispatch reported that Jemal owed Richmond $293,777 in real estate taxes, including $65,658 for the cookie factory. Records indicate that he's paid up almost all he owes. Future plans for his properties, most of which he bought between 2002 and 2008, remain unclear.