A look at some of the arts and culture events scheduled over the next few months – unless things change.

“Mending Walls: the Documentary,” part of the Richmond International Film Festival, premieres on opening night, Sept. 7, at the Byrd Theatre.

Editor’s note: All dates are subject to change due to the evolving nature of the pandemic. You should check with each website closer to the event date to learn about any updates as well as any requirements such as vaccination cards, masks, or changes to health and safety protocols.

“With All and In-Between” at Candela Gallery, Sept. 3 – Oct. 23
An exploration of connections featuring a range of photographs, sculpture and video works, this exhibition is a collaborative project with the sixth annual Afrikana Independent Film Festival. Hosted by Candela Gallery and curated by Enjoli Moon, Sandy Williams and Nigel Richardson, “with all and in-between” looks at how 2020 created an opportunity for people to recognize the value of “with-ness,” ultimately pushing us to re-examine the ways we protect, preserve and grow relationships when traditional ways of being are disrupted. candelagallery.com.

Richmond International Film Festival, Sept. 7-12 (various locations)
This locally produced festival spotlights documentaries, experimental shorts and narrative films with eclectic and wide-ranging guests, including filmmakers, actors, musicians and chefs. One of the highlights of this year’s festival will be a screening of the locally made “Mending Walls: the Documentary,” which premieres on opening night, Sept. 7, at the Byrd Theatre, with a broadcast premiere on VPM on Sept. 16. The one-hour documentary follows the making of the Mending Walls RVA Mural Project, created by local artist Hamilton Glass in response to community unrest following the murder of George Floyd in 2020.

“Our intention in documenting the Mending Walls project was to reveal the true healing journey behind the art, “ said producer Pam Hervey in a release. “It isn’t just about creating public art. It’s about Hamilton’s vision for creating community-wide compassion for each other, understanding that our experiences make us who we are, and growing empathy between artists, organizers, and volunteers.  If this documentary inspires one person to have those hard conversations with another, then we’ve achieved our goal in making it.”

The entire festival, spread out over theaters, concert venues and eateries throughout Richmond, promises to suggest how life was before the coronavirus turned many of us into streaming-obsessed hermits. For tickets and details to all the events, see the website: rvafilmfestival.com.

Violins of Hope featured concert with the Richmond Symphony at Cathedral of the Sacred Heart, Sept. 9
This event will feature special guest Avshi Weinstein, an Israeli violin-maker and son of Israeli violin craftsman Amnon Weinstein, performing a powerful musical program honoring the musicians, people and stories of the Holocaust. 7:30 p.m. To read details about Violins of Hope, a touring collection of violins that survived the Holocaust and is traveling around three Richmond museums – the Virginia Museum of History & Culture, the Virginia Holocaust Museum and the Black History Museum & Cultural Center of Virginia – visit the website violinsofhoperva.com. Also read next week’s Style Weekly for more on the exhibition.

Lucy Dacus and Julien Baker at the National, Sept. 10-11
Hometown songwriting hero Lucy Dacus returns on the heels of her nationally acclaimed third album, “Home Video” (Matador records), exploring her coming-of-age years in Richmond. She’ll be joined by pal Julien Baker, also a part of supergroup Boygenius with Dacus and Phoebe Bridgers. It looks like each singer-songwriter may be taking a turn as headliner, with other guests to include Palehound opening Sept. 11 and Thao opening Sept. 10. thenationalva.com.

Richmond Ballet’s Studio One series, Sept. 14-23
One of the state ballet’s signature events for fall, these intimate performances include “Three Preludes” with choreography by Ben Stevenson and music by Sergei Rachmaninoff with pianist Douglas-Jayd Burn, and “Pas de Deux” from “Vestiges” featuring choreography by Colin Connor and music by Michael Nyman. The program closes with a world premiere by Richmond Ballet Associate Artistic Director Ma Cong. Visit richmondballet.com for information on tickets and the schedule.

Sixth Annual Afrikana Independent Film Festival, Sept 16-19
This year’s festival will feature outdoor and virtual events. But you’ll have to check the website at afrikanafilmfestival.org for the events, which we could not confirm as of press time. 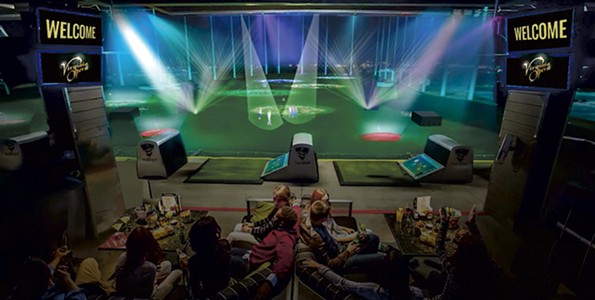 Virginia Opera’s performances of “Das Rheingold” at Topgolf, Sept. 19
Based on Germanic heroic legends entailing dwarves, gods and giants, this opera usually takes place among castles and mountains of the Rhine. But on this date, the first opera of Wagner’s Ring Cycle will be transported to a different location entirely: Topgolf. Yes, you read that right. Desiring to perform an opera but unsure what pandemic restrictions might look like ahead of time, Virginia Opera announced in May that it would stage “Das Rheingold” at Topgolf locations in Richmond and Virginia Beach, taking advantage of the outdoor settings. Conducted by Adam Turner and directed by Mary Birnbaum, this condensed version will be performed in under two hours. Food and beverages will be available for purchase through Topgolf. Richmond’s 4:30 p.m. performance has already sold out, but at press time there were still tickets left for the 8 p.m. show. Virginia Opera’s Richmond performances take place on Sept. 19 at 4:30 and 8 p.m. at Topgolf, 2308 Westwood Ave. For information visit vaopera.org or call 866-673-7282. 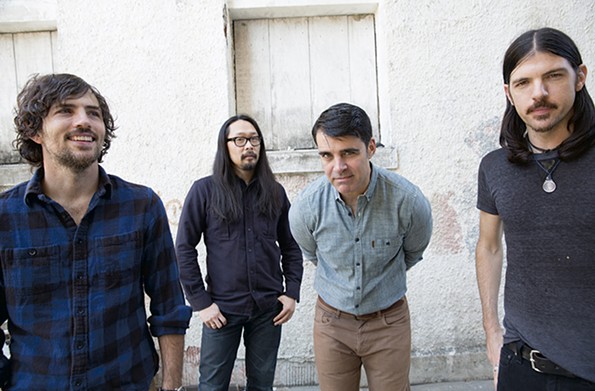 ZZ Top with Reverend Payton’s Big Damn Band at Meadow Event Park, Doswell, Va., Sept. 22
Having just lost their long-time bassist Dusty Hill in July, the classic blues rockers return to After Hours Concerts during what is sure to be an emotional tour. 6 p.m. afterhoursconcertseries.com

Dineo Seshee Bopape’s “Ile aye, moya, là, ndokh…harmonic conversions…mm” at the Institute for Contemporary Art at VCU, Sept. 24 – Dec. 19
South African artist Bopape uses video, sculpture, installation and animation to pay homage to “those who were taken, those who struggled, those who fled and those who still seek sanctuary in the liminal spaces between captivity and illegal freedom.” The title references the elements – earth, wind, fire and water – using various languages from West and Southern Africa. By transforming soil samples from Virginia, Louisiana, Senegal, Ghana and South Africa into material for sculpture and video, Bopape highlights the connectedness of the disparate places, both historically and materially. icavcu.org.

Ansel Adams “Compositions in Nature” at VMFA, Sept. 25 – Jan. 2, 2022
The Virginia Museum of Fine Arts invites you to explore more than 70 beautiful landscape photos taken by one of the country’s most famous photographers, Ansel Adams. You know his stuff. The exhibition will include iconic images as well as rarely seen early photographs and musical recordings that will take you behind the camera. There will be an opening talk and performance Sept. 24 from 6 to 7:30 p.m. vmfa.museum.

Nate Bargatze at Dominion Energy Center’s Carpenter Theatre, Oct. 1 – two shows.
With his calm, measured delivery, Nate Bargatze is one of the most hilarious Southern comedians on the national scene right now. If you enjoyed his two popular Netflix specials, don’t miss the Raincheck tour with two shows at 7 p.m. and 9:30 p.m. Ha, we’re laughing right now just thinking about when he told that joke about pretty much anything. dominionenergycenter.com. Second Street Festival in Jackson Ward, Oct. 2-3
Recently voted by Style’s readers as the Best Black Cultural Event, this is one of the largest street festivals held in the mid-Atlantic region. This year’s festival headliner is none other than Richmond’s own Plunky and the Oneness, the “Afroclectic” jazz saxophonist who has been keeping folks happy with his street performances throughout the pandemic. You’ll have to check the website at venturerichmond.com or the Facebook page for more updated events which had yet to be announced at press time. Also, as part of this year’s festival, the JXN Project will be installing 15 honorary street signs throughout Jackson Ward for the 150th anniversary of the historic neighborhood. Free. 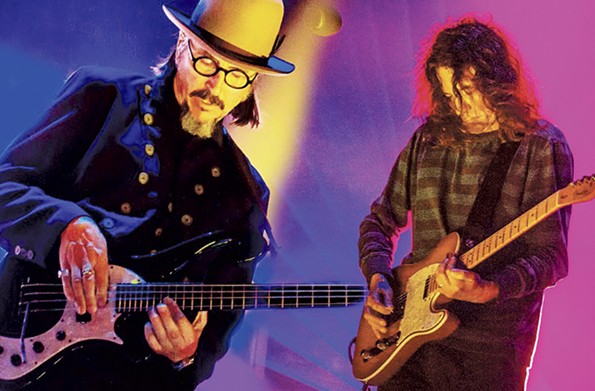 John Cleese, “Why There Is No Hope” at Altria Theater, Oct. 10
The legendary Monty Python member returns for what will surely be a night of dry, British hilarity and the occasional snicker. 7:30 p.m. altriatheater.com.

The Richmond Folk Festival, along the downtown riverfront, Oct. 8 – 10
Yes, the city’s biggest live outdoor music festival is scheduled to return in full force this year for its 17th event. Just last week, organizers released the names of additional musical artists set to perform including: Taj Weekes and Adowa (reggae); Sugaray Rayford (blues); Donny Broussard and the Louisiana Stars (Cajun); the Brotherhood Singers (a cappella gospel quartet); Tres en Punto (trio romantico); the Pedro Giraudo Tango Ensemble (Argentine tango); and the Western Flyers (Western swing). Stephen Lecky, director of events, told Style that it will be “updating the COVID policy as we get closer to the events.” It will be following state and federal guidelines for outdoor gatherings. Learn more at richmondfolkfestival.org.

Patti Labelle with the Whispers at Altria Theater, Oct. 16
The graceful and stylish world-renowned singer returns to belt out “classic rhythm and blues, pop standards and spiritual sonnets.” 7 p.m. altriatheater.com.

Cimafunk at Alice Jepson Theatre at the University of Richmond, Oct. 17
One of the exciting new faces on Cuba’s music scene, Cimafunk is continuing his “goal of world domination by way of fun and clave” NPR says. The singer, composer and producer boldly mixes his Cuban musical heritage with American funk and African rhythms. 7:30 p.m. modlin.richmond.edu.

Steve Martin and Martin Short at Altria Theater, Oct. 22
Two famous comedian friends get together for a night of laughs and music with their production, “The Funniest Show in Town at the Moment.” Features special guests Jeff Babko and a bluegrass band, Steep Canyon Rangers. 7:30 p.m. altriatheater.com.

Richmond Ballet’s Studio Two, Oct. 26-31
The second studio series of the fall features the light and effervescent “Allegro Brillante” by George Ballantine and another world premiere by former Richmond Ballet dancer Tom Mattingly, which was inspired by Virginia’s natural beauty. Visit richmondballet.com for information on tickets and the schedule.

Man Ray: the Paris Years at VMFA, Oct. 30 – Feb. 21, 2022
Focuses on the innovative portrait photographs of the American master while he was working in the French capital between 1921 and 1940. See article in this issue.

Tom Segura at Altria Theater, Nov. 13
Actor, comedian and writer Tom Segura brings his I’m Coming Everywhere tour to Richmond, because it makes sense, right? We are a part of everywhere. Shows at 7 and 10 p.m. altriatheater.com.

America’s most despondent funnyman and the brilliant, Balthazar-esque star of Rick Alverson’s film, “Entertainment,” returns to gargle phlegm and tell subtle and sophisticated jokes, some of which may be posed as questions. 8 p.m. thebroadberry.com.

This festival "aims to raise awareness about Native American languages, cultures, and societies through films that share Native American perspectives. The Festival, which is the only one of its kind on the East Coast, brings together artists, authors, filmmakers, and actors who share a passion for film and features experiential learning opportunities for the entire public." To see the 2021 line-up, get passes, and more: https://pocahontasreframed.com/