A new building connects the spiritual with the scientific. 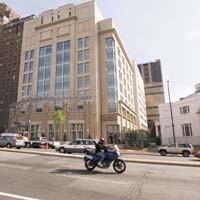 Located on the north side of Broad, where the street plunges toward Shockoe Bottom, the mocha-hued brick building is wedged between the stalwart West Hospital, a defining downtown high-rise, and Monumental Church (designed by the nation's first native-born professional architect, Robert Mills).

More importantly, the former Episcopal church (Monumental was deconsecrated in the 1960s) is also a mausoleum containing the remains of 72 victims of a fire that ravaged a theater on the site at Christmas in 1811 — one of the greatest tragedies in our city's storied history. And West Hospital (Baskervill and Son, architect), with its ziggurat crown, is a Depression-era, art deco jewel that since 1940 has been the medical campus' icon. Therefore, what was built between these two strikingly different landmarks, separated by some 125 years, required restraint and a deft and surgical touch.

The result, conjured by the architectural and construction team of Ballinger of Philadelphia, Skanska USA of Durham, N.C., and Richmond's Commonwealth Architects, is highly conservative and restrained — but that's a good thing. On this prominent and historic hillside, the designers were hardly obsequious but delivered a sensitive and intelligent solution that gets better upon close examination.

Of course, in this densely built quarter of town, whose development dates to the late 18th century, something had to be removed to free up the site. Cabaniss Hall, a 1927 nursing education building with Italianate detailing, was sacrificed. Together with Hunton Hall (which stood until the 1970s on the northeast corner of Marshall and 12th streets) and the A.D. Williams Clinic building, Cabaniss formed an architectural nest for West Hospital.

The new research building, with its four-bay front faAade, respects the scale and integrity of Monumental Church while stepping up the hill and allowing West Hospital to still tower above. Harmony is further achieved because the research building, like its neighbors, employs the classical idiom of proportion: The three neighbors speak the same root architectural language.

The exterior of the new research building is also classical in that it employs a base, shaft and an entablature (like a column) in the same way the facades of early skyscrapers were organized. But in a dramatic departure, the first floor base is extended beyond the building's main block to form a gentle arc extending toward Broad Street. This pleasing curve is articulated by six engaged columns that ascend to the second-floor level where they emerge and become free-standing pier columns, forming a pergola. This second floor open space creates a terrace that provides a panoramic view of Broad Street sweeping from Old City Hall to Shockoe Bottom.

The building's first-floor walls are faced in brick in many hues, ranging from light beige to brown, which provides rusticated heft at the building's base. This choice of material also respects the context of the buff-colored walls of Monumental Church and the stone detailing at the base of West Hospital.

Above the first floor a six-story research tower rises with four bays of paired windows on the Broad Street side. The building's two windowless, uppermost levels form a solid entablature and an attic — all classical in spirit.

This newest addition to the downtown streetscape looks so comfortable because it reflects the way that many Richmond high-rises have been articulated for a century.

If the basic structure is restrained, the details sparkle. This begins with how the building relates to Monumental Church. The research building is set back a respectful distance from the landmark and is aligned (indeed, has been attached) with the adjacent Herman A. Kontos Medical Sciences Building, the postmodernist structure that extends to East Marshall Street.

The molecular medicine building has two front doors. Each is on the eastern side of the building facing Monumental Church and each placed at 45 degrees, a nod to Monumental's angular, octagonal form. Floor-to-ceiling windows create a pavilionlike lobby offering unobstructed views of the church.

And although real estate is a precious commodity on this campus, the landscape design, especially how previously unrelated spaces are now connected, is especially well-handled. A wide walkway, lined with crepe myrtle and brick, runs between the new research building and Monumental. It links Broad Street with the plaza outside the Egyptian Building, creating a handsome new downtown open space.

The university and its designers used a tuning fork instead of a sledgehammer for this addition to its medical center, in which 48 researchers and staff will study illness and disease and potential treatments. If the interior laboratory floors were designed with an open layout plan to spark interaction between disciplines, many of the spaces on this site — indoors and out — should encourage students, scientists and doctors to interact with their neighboring environment, which is rich in history and architecture. S