Richmond-area faith leaders and elected officials gathered for a solidarity rally in Shockoe Bottom on Sunday, Aug. 13 following a violent clash between white nationalists and antiracism protesters in Charlottesville.

The rally in Richmond, which was attended by a couple hundred citizens, as well as Mayor Levar Stoney, Gov. Terry McAuliffe, and Rep. Donald McEachin, was organized by Virginia Del. Dolores McQuinn.

Slideshow Faith Rally at the Reconciliation Statue in Shockoe Bottom 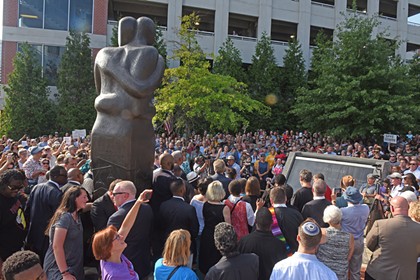 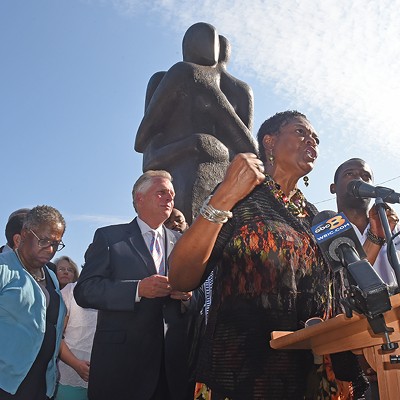 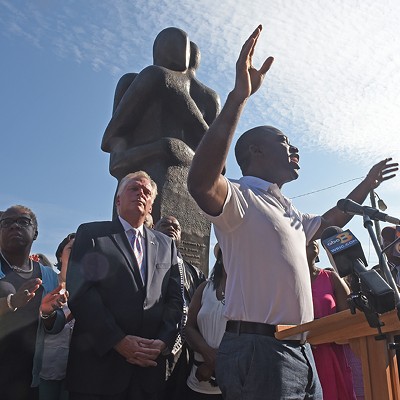 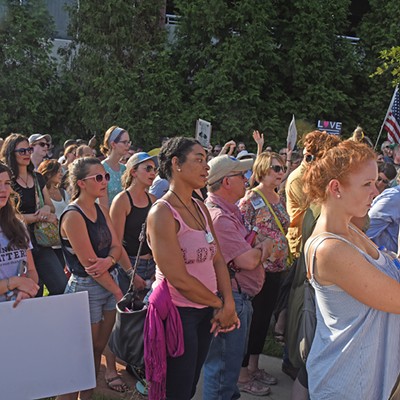 "We come today praying for Charlottesville, those who have lost their lives and those who have been hurt," McQuinn said, standing beneath the slavery reconciliation statue at the corner of Main and N. 15th streets. "We stand in the shadow of this reconciliation statue as a symbolic gesture to remind us that we still have work to do. The battle to fight racism, prejudice, hatred and the faces of evil is not over."

"Evil does not just go away without the power, persistence and prayer of people of good will," McQuinn continued. "This is not just the story of a statue in Charlottesville or other places around this nation. It is about what is — and that is evil. That's what it's all about. We battle evil by fighting for the heart and soul of America, democracy and this nation. We do not fight fire with fire. We fight fire with faith and that's why we are here today."

McQuinn was joined by Gov. McAuliffe, who expressed grief and condolences for the two state troopers who died in a helicopter crash near the event in Charlottesville, as well as a protester, Heather Heyer, who was killed after a car rammed into a group of protesters.

"We will not let a small group of individuals, with their racism and their bigotry, to come into our state. My message to those people is go home. You're not welcome here in the commonwealth of Virginia," McAuliffe said.

Richmond Mayor Levar Stoney offered a message of warning to those who might seek to bring violence to Richmond.

"I want to commit to you," Stoney said, "That if that evil, that hate, that bad shows up in the city of Richmond, I will protect everyone against that racism, that prejudice. Around the world, around the country, they must know that Richmond is inclusive. We are for everyone.

"There are those who want to take us back to a time of domestic terrorism, of people fearing for their lives," Stoney said. "In this city, in this state, we will not allow that. Collectively, we have to send a message that we will march forward, just like the giants before us."

Stoney announced a committee in June to determine the future of Richmond's own Confederate monuments. A public input session on Aug. 9 at the Virginia Historical Society bordered on near chaos at times as attendees shouted down speakers and held up held up signs that read, "No context, no compromise."

At the rally on Aug. 13, local faith leaders also offered prayers of healing and strength for those who were injured and killed in the Charlottesville rally, as well as for the state of Virginia.