Barksdale's "My Fair Lady" is alternately engaging and antiquated. 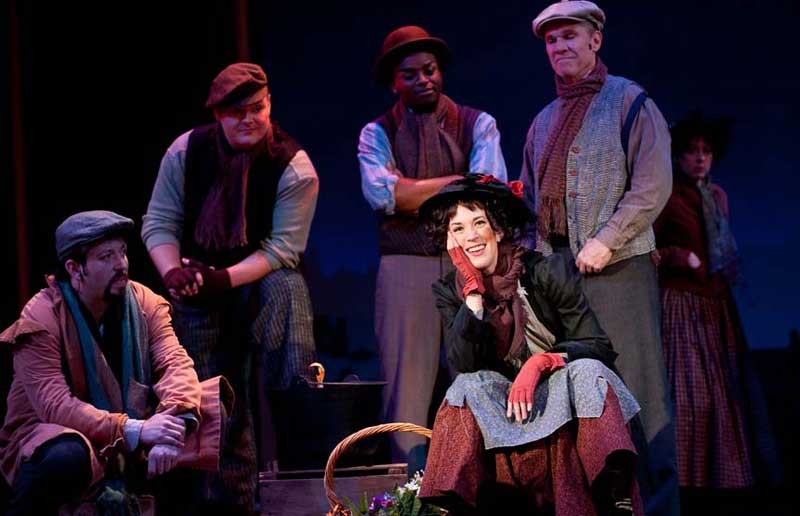 That old saying about not seeing the forest for the trees can work in reverse. Consider Barksdale Theatre's stage extravaganza, "My Fair Lady." Fifty-five years after its debut on Broadway, this celebrated musical is weighed down by outdated notions of gender and class politics. Set in 1911, it has additional old-fashioned musical baggage: plot threads and production numbers that seem extraneous, particularly in a show that runs more than three hours.

But considering only this forest obscures the many splendid trees that stand out in this production, first among them a brilliant performance by Stacey Cabaj as the proud and persistent Eliza Doolittle. Eliza submits to the unsparing tutelage of phoneticist Henry Higgins (Joe Inscoe) in an effort to shed her cockney accent and move beyond her lowly station selling flowers in London's streets. Their arrangement attracts the attention of others: Eliza's perpetually drunk father, Alfred (Jason Marks), looking for money; and an ardent upper-class suitor, Freddy (Ben Houghton), looking for love.

Along the way, some of the most famous Broadway tunes of all time roll by, each of them impeccably performed, from Cabaj's soaring "I Could Have Danced All Night" to Marks' comic "Get Me to the Church on Time." Houghton, who doubles as the production's musical director, delivers a fabulous full-bodied "On the Street Where You Live"; it's a shame his character seems so extraneous.

Cabaj suffuses Eliza with unpolished pluck and steadfast nobility while she weathers Higgins' intense educational methods. Eliza's Act 1 unveiling as a society lady at the horse races — and the subsequent irrepressibility of her spirit — is the show's highlight. In his few scenes, Marks threatens to steal the show with his amiable antics. The supporting cast members are all spot-on, with Lauren Leinhaas-Cook's portrayal of long-suffering housekeeper Mrs. Pearce just one standout among many.

Inscoe adds depth to Higgins's fanaticism for proper speech but the actor's charisma can't diminish the emotional ignorance the character displays. The minimal repentance he voices in "I've Grown Accustomed to Her Face" seems inadequate. The action plays out on a sumptuously appointed set designed by Brian Barker, and Sue Griffin's period costumes are gorgeous. The orchestration — a pair of pianos provide all the accompaniment — never seems spare, but I found Leslie Owens-Harrington's choreography uninspiring.

Director Bruce Miller doesn't appear to have done much to update this classic piece, so it sometimes seems a bit staid. But, even if the show has some tarnish, that doesn't diminish the embedded gems that shine brightly. S

"My Fair Lady" plays through Jan. 8 at the Empire Theatre, 114 W. Broad St. Call 282-2620 or go to barksdalerichmond.org for tickets and information.