“Made in Dagenham” tries to find the entertainment value in union organizing. 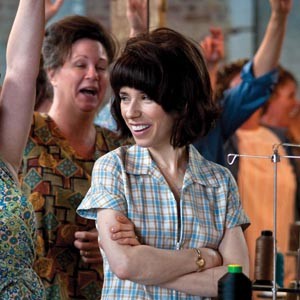 When I sat down to watch the based-on-a-true-story “Made in Dagenham” I expected a no-nonsense British period drama, something Ken Loach or Mike Leigh would have turned in — something like “Vera Drake” or “The Navigators.” OK, so maybe a little nonsense too, but nothing like the light fluff that is “Dagenham,” staring Sally Hawkins as factory worker Rita O'Grady, leading a 1960s strike in England to force equal pay for women.

There might as well be singing and dancing in this movie because that's how seriously director Nigel Cole (“Calendar Girls”) takes his subject, trying to wring cute and fun out of what was probably a painful, dull and depressing decades-long struggle by female workers after the Second World War.

Rita works at a British Ford plant in a women's division that fashions vehicle interiors. They turn out the seats and other nonmetal parts. Management deems this cutting and sewing unskilled labor, to avoid paying the same wages they pay men to solder and weld. At first Rita is just one of a few union representatives stooping before the executives to present demands for equal treatment, but she does so well in one meeting that the rest of the women — aided by one determined man (Bob Hoskins) — elect her as their leader. The rest of the movie is a showdown between Rita and the powers that be, including a government traditionally sympathetic to whichever side is essential to keeping the economy humming.

Hawkins is her usual irrepressibly enjoyable self, but director Cole can't help portraying the women from a slightly chauvinistic and old-fashioned point of view. Rita and her crew, from his perspective, are plucky go-getters rather than forces in a labor struggle. Imagine “Norma Rae” with a lot more blushing, giggling and gossiping (and a lot more throwaway montages of picketing and marching).

“Dagenham” isn't quite the assembly-line product that may have resulted with a bad American production, but it's the foreign equivalent of that kind of film, going for saucy when serious would have worked just fine. (R) 113 min.  S