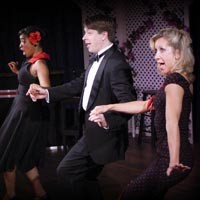 Swift Creek Mill Theatre's musical revue "A Dash of Rosemary?VbCrLf has all the dramatic tension of a middle-school book report. But what the script lacks in riveting plot, the production makes up for in spectacular performances, particularly that of vocal heavyweight Cathy Motley-Fitch.

The peppy little show recounts the life story of singer Rosemary Clooney (George's aunt), who enjoyed a meteoric rise to fame in the early 1950s thanks to popular tunes such as "Come On-a My House?VbCrLf and "Half as Much.?VbCrLf She reached the pinnacle of success after her transition into television and movies - appearing in "White Christmas?VbCrLf with Bing Crosby - before her life spiraled out of control in the 1960s. After years struggling with mental illness and drug problems, she re-emerged in 1977, spending the rest of her life enjoying a reputation as one of "America's sweethearts.?VbCrLf

Clooney's hits are delivered by two performers in addition to Motley-Fitch: the angelic chanteuse Katrinah Lewis and the versatile Brandon Becker. None of the actors portrays Clooney per se, though many scenes from her life are pantomimed, including her early years singing with her sister, Betty, and her redeeming late-in-life reconnection with boyfriend Dante DiPaolo. The expositional structure allows for little exploration of Clooney's character and any depth that seeps in is quickly trampled by another declaration of Clooney's devotion to her fans.

The focus here is on the songs. You'd have to have a heart of stone not to submit to tear-jerkers such as "Count Your Blessings (Instead of Sheep)?VbCrLf and "Turn Around,?VbCrLf particularly as caressed into melody by Motley-Fitch. Lewis is no slouch either, with a sweet, mellifluous tone and a crystal-clear higher register that only occasionally becomes a bit shrill. Becker is primarily relegated to playing the token male or providing comic relief, but manages to shine on some of the novelty songs like "Fancy Meeting You Here.?VbCrLf

The players are decked out nicely by costume coordinator Barbara Brock, particularly the striking black-and-red outfits of the first act, and musical director Paul Deiss' orchestra provides excellent support with an especially energetic rhythm section. For some, this show will represent a trip down memory lane; for others, a voyage of discovery.

Summer blockbuster season recently started at the movies, so people are getting a great deal of practice at suspending disbelief. But for me, a nuclear reactor in Iron Man's chest is no harder to accept than the premise of Richmond Triangle Players' "The Two Svengalis.?VbCrLf Through pure force of will, jilted housewife Toni Bacigalupo (Nancy McMahon) and heartbroken composer Billy Battle (Kirk Morton) rise to the top of the 1950s New York nightclub scene. When discord arises over whether they are trying to get back at their ex-lovers or trying to get them back, Toni jettisons Billy, moves to Hollywood and becomes a movie star.

Neither McMahon nor Morton is extraordinary enough to make the far-fetched premise believable, but if you're willing to go along with it, there are some pleasures to be found along the way. The trajectory McMahon takes from celebration to bitterness in the course of the song "Break My Heart?VbCrLf is impressive, and Morton has a good time with cleverly cynical songs like "I Want a Great Big Beautiful Blonde.?VbCrLf But while McMahon manages the transition from nervous newbie to jaded veteran with aplomb, Morton's character remains one-note throughout.