Is it better to eat happy animals? 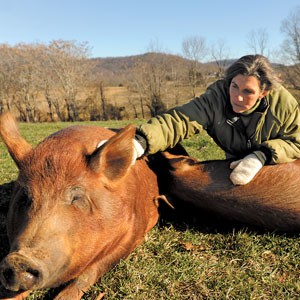 They'll wriggle under fences. They'll root up every clump of grass in a pasture. Today, they've nosed the hose out of the water trough and made themselves a muddy Jacuzzi, forcing Ramona Huff to come up and turn off the faucet. As soon as she parks her battered Land Rover in the pasture, a dozen hogs run up and start scratching themselves vigorously on the bumpers.

Huff laughs and lets them. That's what makes them happy, after all: scratching and sunshine, rooting and roaming. And slurping up the fermenting apples Huff tosses by the bucket load out in the field.

Each young pig will live this idyllic existence for nine to 14 months. Then, that happy swine will be slaughtered at Smith Valley Meats in southwest Virginia and turned into ribs, loins, butt and chops.

That's how it works at Gryffon's Aerie, the Crozet farm Huff operates with her husband, Collins. Ramona Huff believes you can like your animals and eat them, too. But that's an idea many Americans can't deal with, she observes. Animals are either our beloved pets or our shrink-wrapped steaks. Hence the acceptance of factory farming systems in which sows are tightly caged and cows are crammed with corn.

Why are we afraid to look our food in the face? Huff says she believes it's because we're a culture without reverence for farm animals or the long traditions of raising them. “We're a culture of convenience,” she says. “We're a soft culture.”

Huff is not a softie. She does, however, get attached. She'll never slaughter Pinky, a bottle-raised Devon cow who comes galumphing up to lick her hand, as friendly as a dog. Same goes for Banana Puddin', a black-and-white sow with an old limp who's a “dear sweet thing.”

Though she could easily pass for a rancher, Huff wasn't born to farm; she used to be an advertising executive. The Huffs started raising cattle in 1999, after Collins was introduced to grass-fed beef by his polo-playing Argentinean friends. They settled on cattle called Devons, an old English breed known, Ramona says, for producing “the sweetest meat out of the poorest ground.” The less lyrical way of saying this is that the Devons' flesh marbles (acquires flavorful flecks of fat in the muscle), even when they eat nothing but grass.

The result, Collins says, is a beef that's not too lean and has a distinctive mineral taste derived from the farm's unique land characteristics, or terroir. The same is true for the Huffs' pork and lamb, from Tamworth pigs and Karakul and Cotswold sheep.

Not only does grass feeding produce leaner meat with healthful omega-3 fatty acids, Collins says, but also when you get down to it, a happy animal tastes better. An adrenaline surge in a stressed or fearful animal can impart an unpleasant flavor to the meat.

Less complex than pigs, the Huffs' cattle and sheep stay happy as long as they're outside grazing with the herd and have their babies with them. But the dairy herd is lowing this Saturday afternoon, complaining about being stuck in “the pasture of discontent,” as Ramona calls it. She swings wide the gates to the fresh field. Matriarch Frances, a 16-year-old cow, leads the group through.

In a commercial operation, Ramona says, an old cow like Frances already would have been crammed into a trailer, slaughtered and turned into hamburger.

“That's not the deal I make with my cows,” she says. Frances, who has given birth to 10 healthy calves, will die in her own time right here on the farm.

The unhurried herd ambles after Frances and starts munching on new grass.

“See, now they're happy,” Ramona says. She's not sure why they like this open field more than the other, tree-bordered pasture. Maybe it's the view.

She looks over the red cows, the far Blue Ridge, the cirrus sky.

“I'd be happy in this pasture,” she declares.

Gryffon's Aerie is open for meat sales noon-5 p.m. on Saturdays. 4803 Mount Air Farm in Crozet. 434-823-5725. Its products appear on local restaurant menus such as Six Burner and Comfort, and also are sold through Belmont Butchery.