A new 1708 Gallery exhibit pulls off a hat trick. 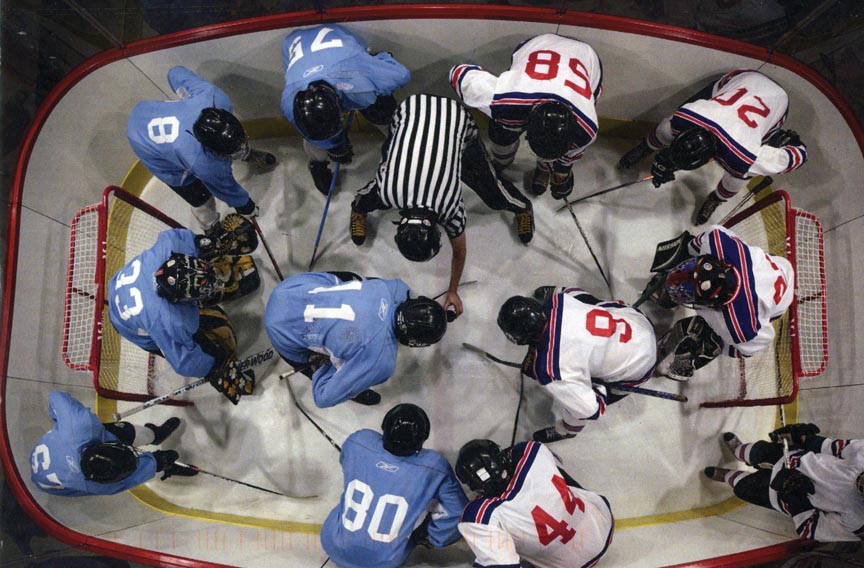 It isn't often that sports and art intersect in a gallery. But the new exhibition at 1708 Gallery is a hockey rink. Not a painting or photograph of one, but an actual, albeit scaled-down, hockey rink. R. Eric McMaster's "The Obstruction of Action" provides the viewer with an immersive experience that explores questions of how the self is altered by rules and conditions imposed upon us.

The centerpiece of the show is an 18-by-12-foot hockey rink with 8-foot glass walls that have a decidedly reflective quality. That's "so you see yourself reflected in it as you approach and there's a sense of infinity," McMaster says. "But once you get in it with a number of people, it'll seem small."

The artist hired two hockey teams plus a referee to play six on six inside the shrunken rink while he filmed the action. That resulting video is projected on the wall near the rink while a still photograph of an overview of the action hangs opposite. These three pieces — the rink, the video and the still — make up "The Obstruction of Action by the Existence of Form."

"Hockey is a big, open, fast-paced game with lots of the 'wow' coming from speed," McMaster says. "By shrinking the rink, all the 'wow' moments are taken away. It's something that can't be complete without the form around it."

Just as thought-provoking is the video being projected on a white space in 1708's large front window. During the Olympics, McMaster recorded face-shot footage of athletes, mainly gymnasts and runners, nervously waiting for the signal to compete. But because we see only their faces, with no context, it's challenging to figure out what's happening. "The minute you obstruct the action," he says, "something is missing."

But it's also compelling, as the artist discovered when he did a test run. "I was amazed at how many people stopped to look," he says. "Hopefully it will become almost a public art project."

The most moving piece in the show is "The Obstruction of Action by the Absence of Other," a video of a couples skater doing his routine alone. McMaster had planned to use the couple individually, each doing the routine alone, but the female skater had a career-ending injury before he could finish. "So you're watching the skater going through motions that were dependent on a partner," he says, of the routine he shot 14 times. "I had mixed feelings about it because I realized it had worked out in my favor, but it was poignant."

The sports theme that permeates the show came about in 2006 when McMaster and his wife were looking to learn a sport together that neither had tried. Settling on field hockey, he played the striker position, essentially a scoring one. "When I went to my first tournament, I kept getting called for rule infractions," he says. "During the course of playing, I noticed I was aggressive at the beginning but timid at the end, and I became interested in how my authentic self was being altered by the rules and conditions of the game. Since then I've been exploring different sports-themed works."

The nonsports enthusiast can find a lot to take away from McMaster's show.

"As an artist, I'm always walking that line between making something direct or indirect," he says. "I'm trying to remove the easy read. I want people to leave the gallery with a sense of incompleteness and thinking along those lines, more aware of themselves in relation. I want them to see how empty the show is, each piece in relation to its potential. I have to be a little inaccessible to make that happen. At the very least, there's a quality to the objects. I take a lot of pride in how I make things." S