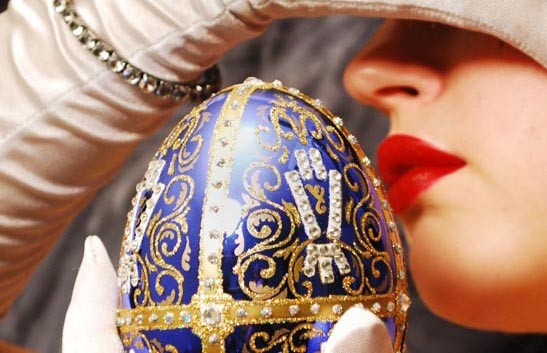 Richmond’s best-known burlesque performers, recently ousted from the Canal Club by the Virginia Department of Alcoholic Beverage Control, have found an unlikely host: the Virginia Museum of Fine Arts.

On Friday, Sept. 23, they’ll put on a burlesque show at the museum inspired by the “Fabergé Revealed” exhibit. It starts at 7 p.m. after a beer and wine social hour.

The show was the idea of Julianne Zimmerman, the museum’s coordinator for Friends of Art. “I just started thinking about revealing,” Zimmerman says, “and then I thought about burlesque girls.” The goal: to attract younger people to exhibitions they might not ordinarily attend, such as Fabergé.

The Friends of Art booster group was dismantled last year because, Zimmerman says, it wasn’t running efficiently. Friends of Art is back in the form of an advisory council.

Zimmerman spoke with Deepa De Jour and Dolli Holiday, co-founders of the Richmond Institute of Burlesque, who “jumped at the chance” to put on a show. This preceded the July 29 bust, when ABC agents put a halt to the monthly Richmond Varietease burlesque show at the Canal Club. State law allows the department to suspend a venue’s mixed-beverage license if it allows strip teasing or topless entertaining. But the law exempts museums and other arts establishments, as long as the performances “are expressing matters of serious literary, artistic, scientific, or political value.”

Each of the burlesque acts planned for the museum show is inspired by a different piece of Fabergé art, including a serpentine paperweight and a sailor carved from gems. Holiday chose the royal blue and gold “Imperial Czarevich Easter Egg.” “It’s going to be nothing short of exquisite,” she says of the show.

There are no plans to make the museum a permanent performance space. “We’re still looking for a new home for Varietease,” De Jour says, “but we’re not going to sit around and get rusty while we wait.”

If the Fabergé-inspired performance is well attended, Zimmerman says, perhaps they’ll do another one for November’s Egyptian exhibition. Mummies unwrapped?