Eye of the Needle

The Valentine turns its lens on Richmonders' ink. 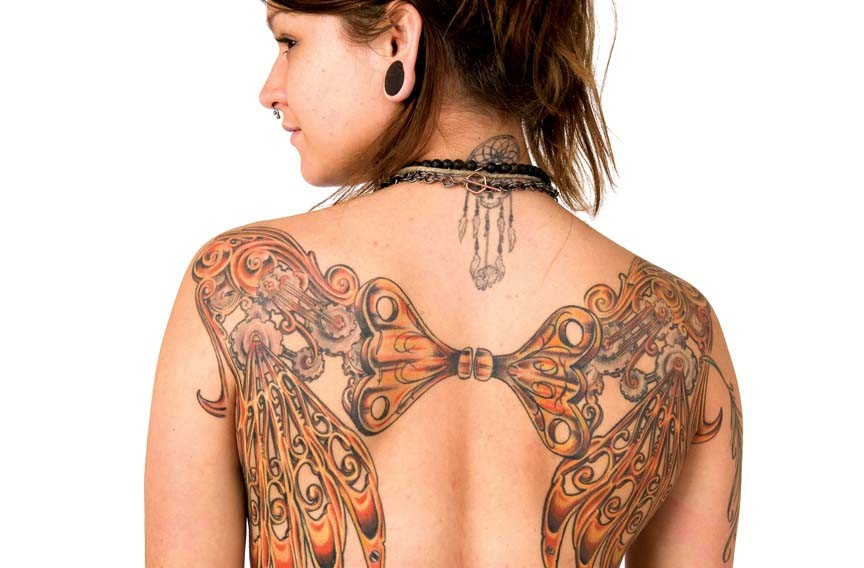 Who knew Richmonders' shoulders (or calves, or nether cheeks) had such historical significance?

It's no surprise that this city loves ink, especially given the recent discovery that Richmond ranks third nationally in tattoo studios per capita. The Valentine Richmond History Center is documenting this fascination with "History, Ink: the Tattoo Archive Project."

For the exhibit, the museum publicly asked people to share their body art, and then hired photographer Terry Brown to shoot close to 100 of them who had locally made tattoos. Not every tat made it onto the show's walls, but all can be seen in a book on display in the gallery.

"A lot of the designs had a local focus — cardinals, the Lee Bridge, Main Street Station, all kinds of local imagery," says Meg Hughes, director of collections and interpretations at the Valentine. Styles included fantasy, funny, steam punk, gothic, political and intimately personal.

The exhibit isn't a comprehensive examination of the city's skin. "The show is weighted toward more recent tattoo styles, with more of an artistic element to them," Hughes says. "But we're not taking a historical look at tattoos in this show. It's more of a look at what tattoos are like here in 2012. It'll be a good resource in 50 years. Who knows what will be in fashion then?"

The show supports the Valentine's mission to document the city's history to the present, but the results are more than just musty historical records, Hughes says: "Terry did a great job of framing the subjects so the photos are works of art, not just documentation."

Viewers get a sense of the division between more recent tattoo styles, often called modern or new school, as opposed to the traditional American tattooing style.

"Richmond is very known for its traditional old-school style of American tattooing," says Drew Manley of True Tattoo, a proponent of the traditional style. "That's a strong, bold look with black outlines and a palette of primary tones like green, blue, red and yellow and occasionally purple." Even so, the 17-year veteran tattoo artist acknowledges using a lot of mint green, an unhistorical hue: "You can't stick to the 1940s tattooing style as a complete template in 2012. If you do, you're going to fail."

One proponent of the modern style of hyper-realistic images with no outlines is Thea Duskin of Ghostprint Gallery Tattoo. "From an informed standpoint, this is where tattooing is going," she says. "It's a stylistic preference, not right or wrong. It's like any other art form. There are as many different ways to paint as there are painters. Tattooing is the same. I have room in my universe for the whole pantheon of styles. Tattoos should express how a person wants to decorate their body, what they want to express."

"History, Ink" will allow the inked and uninked to explore the artistry, subjects and significance of local tattoos. But check your presumptions at the door.

"They're all very thoughtful designs," Hughes says. "We're past the point where you can make assumptions about a person based on whether they're tattooed or not." S

"History, Ink: the Tattoo Archive Project" opens at the Valentine Richmond History Center on Friday, Nov. 2, with a public reception 5-7 p.m. For information, call 649-0711 or go to richmondhistorycenter.com.