When it comes to shades, Richmond is fully covered with locally made sunglasses in all shapes, sizes and motivations.

Trend watchers date the birth of the cool to the invention of sunglasses in the early 20th century. Hollywood stars may have launched the trend to avoid recognition, but soon saw other benefits. “With my sunglasses on, I’m Jack Nicholson. Without them, I’m fat and 60,” the actor famously quipped about sporting sunglasses 24/7. Richmond’s sunglass habit ratchets up with local designers and purveyors defining 21st-century cool.

If you’re into recycling, reusing or the nostalgia of records, say hello to Vinylize sunglasses. Started in a Seattle garage with glasses now manufactured in Hungary, the company was founded on the principles of making quality shades from old records to give frames a distinctive look.

Big, thick and rugged, the grooves are an integral part of the design. And, yes, they’re prescription sunglass frames. Vinylize glasses are available in only 35 shops across the country, and one of them is Carytown Optical. Prices vary according to the prescription — but start at $475.

“When I got my hands on them, they were so well made they were like an artisan piece,” says Cynthia Allen of Carytown Optical. “I was surprised at how gorgeous they were. They’ve got a clean look with no initials or writing on them.”

The distinctive Grace Jones model is made from her records, and several styles of frames are made from Pink Floyd’s blue vinyl albums. Like the albums involved, “the workmanship is absolutely beautiful,” Allen says. “They’re made to last.” 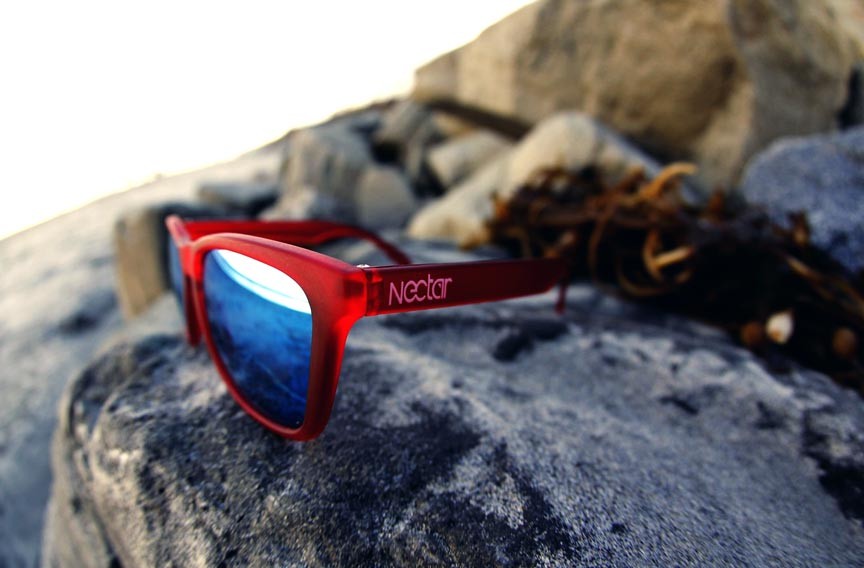 Nectar is the brainchild of Dylan Roukous and Sean Holmes, an idea hatched when they were at Radford University. The brand is based on a simple philosophy: Enjoy the sweet life and take epic risks.

And you can’t do that when you’re worried about the small fortune you paid for what’s on your face. “You shouldn’t have to pay $100 for one pair of sunglasses,” Roukous says. You can pick up some Nectars for a range of $20-$35.

The company established itself in Richmond in early 2012, building a base of local fans. But it’s since moved headquarters to Charleston, South Carolina.

Fabricated overseas, Nectar’s glasses are available locally at Kulture and Katra Gala as well as in 20 countries.

With five classic frame styles, the company uses color to differentiate itself. “People like American brands and the sweet life message we portray,” he says. “People want to feel that message when they put on our sunglasses.”

The “advocates” link on Nectar’s website allows fans to post photos of themselves loving life. “We are authentic in our message and it’s all about the message,” Roukous says.

Taking the festival route to get its sunglasses to the masses, Sunflipz plans to set up shop at the local Earth Day festivals, XL102’s Big Field Day, Dominion RiverRock and the Hanover Tomato Festival, among others farther afield.

Owner David Williamson’s goal was to provide well-made, wood-framed sunglasses at an affordable price. He has a hand in design, naming each style after a hill in Richmond and working with a manufacturer overseas for production. The Libby is a cat-eye style, handcrafted from bamboo wood that’s colored red.

“I want my sunglasses to be unique, wearable and affordable,” Williamson says. “Every pair comes with polarized lenses and flex hinges allowing the temples to flex out if needed and not be stuck in one place.”

Prices range from $55 to $75. And so far, seven styles represent Forest Hill to Chimborazo.

“I wanted to keep them classic but add some unique colors, woods and materials to make them stand out more,” Williamson says. “Two more styles coming out in April will bring our lineup to nine total.”

No word on what happens when Richmond runs out of hills. 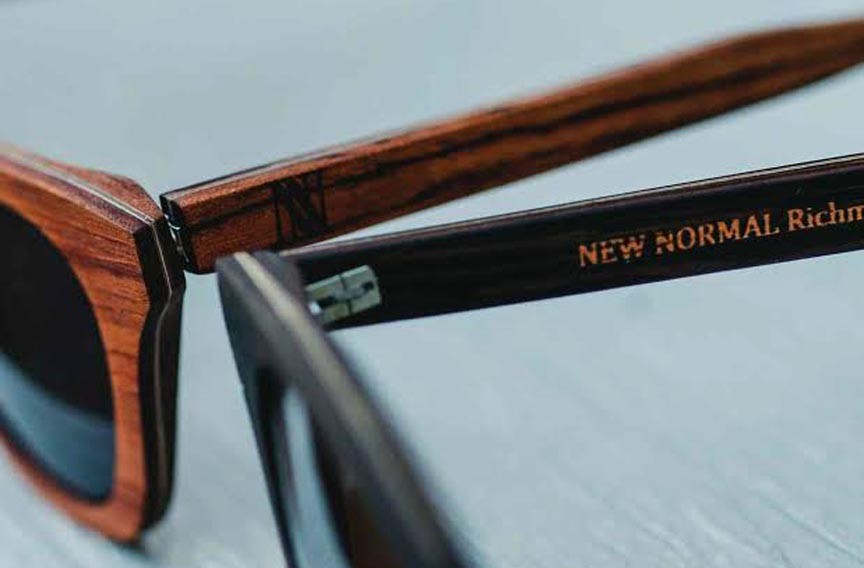 Scott’s Addition is the base for woodworkers Ram Gelzinis and Derick White, who laser-cut sustainable African hardwoods such as babinga, wenge and bocate for New Normal Eyewear’s sunglass line, which uses American-made lenses crafted in Short Pump.

“The only thing imported is the hinges,” says Kelley Blanchard of New Normal Apparel. Based in Jackson Ward, the company says it’s committed to manufacturing goods locally from nature’s raw materials. The sunglasses sell for $150-$250.

Its two original styles, the Belle Isle and Manchester, were named after two prominent historically industrial districts in an effort to highlight the evolving craftsmanship Richmond offers. “Richmond is still a manufacturing area in 2015,” Blanchard says.

Proof is in the sunglasses and T-shirts that New Normal manufactures.

“If you come in, try on our glasses and let us use your picture on social media,” he says, “you can take away any T-shirt from our 2014 collection.”