Could the push to bring back baseball by 2009 be a recipe for disaster? 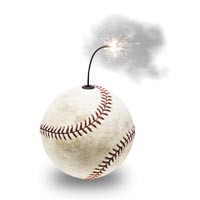 Mayor L. Douglas Wilder's promise that Richmond will have a new professional baseball team suiting up by spring is quickly becoming a dim dream.

The two developers the administration is considering haven't released any details — to the public or to City Council — and big questions remain: How much will a new stadium cost taxpayers? What's the best location for a new stadium? Will the city's regional partners, particularly Chesterfield and Henrico counties, agree to the plan? There's also that pesky little financial crisis gripping the economy, which could imperil financing.

Still, the Wilder administration has yet to address the most important question: Why is it necessary to rush a deal in order to bring in a new baseball team by the spring?

There's little evidence to suggest that waiting to secure the best deal would affect the city's ability to attract a new team, some experts say. It's likely even better to wait to gauge the public's will for baseball during a one- or two-year hiatus before committing public dollars for a new stadium.

“Why is the rush?” asks Mark S. Rosentraub, professor of public administration and urban policy at Cleveland State University who studies ballpark economics. “I don't know that it matters that you take a year or two off.”

Such a break from baseball won't affect Richmond's ability to attract a new team down the road, says Kevin Reichard, editor of Ballpark Digest, who's done his own reporting on the Richmond baseball saga.

“It really won't have an effect,” he says. “I don't think you can argue that it really has an effect on business [ticket sales] one way or another.”
Developers and teams will often argue that it's “now or never” when proposing new stadiums, but Rosentraub says that's a bogus negotiating tactic. At worse, he says, buying into the idea and rushing through a proposal “is a prescription for urban design disaster.”

To date, the city's planning office has yet to receive any proposals for a new stadium in Shockoe Bottom, or along the Boulevard where the current facility sits.

Wilder's office is in talks with two potential groups of developers — the North Boulevard group is led by former city manager Robert Bobb; the Shockoe Bottom group by local developer Bryan Bostic — but neither has submitted anything to Planning Director Rachel Flynn's office for review.

While the Boulevard site is obviously less problematic in terms of design because it's where the Richmond Braves played for 42 years, the Shockoe Bottom proposal warrants a thorough review, Flynn says.

“The devil's in the details. How do you fit something of that magnitude into an historic and small-scaled neighborhood like Shockoe Bottom?” Flynn says. “Maybe it could be done, but we'd have to see design details.”

There's also the issue of economic impact. It's well established that baseball stadiums provide very little by way of financial spinoff. Factoring in 72 home games a year — a game lasts about four hours — would mean the facility is filled with free-spending fans for only 3.3 percent of the entire year. For the rest of the year, 96.7 percent of the time, the ballpark would either be dark or filled with the occasional nonbaseball event.

The Richmond Braves, in their most recent — and last — year at The Diamond, drew fewer than 300,000 fans for 72 homes games. In fiscal 2008, the Richmond Metropolitan Authority, which owns The Diamond, brought in a total of $432,925 in revenue, including rent, parking fees, admission taxes and other money (of that figure, the Virginia Commonwealth University baseball team, which plays its home games there, generated $18,169).

When you factor in the expenses of $568,882 and the annual, prorated skybox revenue of $246,000, it's essentially a break-even operation. Accounting for debt service on a new stadium and opportunity cost — a family that spends $50 at the ballpark isn't spending that $50 on something else — one can argue that baseball is actually a drain on the local economy.

This is why the developers working with the city are proposing entertainment developments that use a ballpark as an anchor. The Boulevard proposal, for example, covers 60 acres and includes a basketball arena, a tennis center, a hotel and a retail shopping center anchored by big-box retailers, among other amenities.

That the proposed developments are so complex makes it even more imperative to study the proposals in detail, and solicit feedback from the community. Bill Pantele, president of City Council and a mayoral hopeful, says City Council hasn't received any information from the Wilder administration to begin weighing those questions. If it's presented to council in the next few weeks, he says it's highly unlikely to win a speedy approval. Could it realistically pass by year end?

“I'd say the chances are not good,” he says, “just by council acting responsibly.”

The Bobb team has floated the prospect of bringing in an independent league expansion club that wouldn't be affiliated with a major league franchise to play at The Diamond while it searches for a Double-A or Triple-A team, like the Braves. The quality of that baseball is widely considered superior. But Pantele says that would be a mistake.

“I would really be quite dismayed that some team got plugged in there so someone could claim victory,” he says. “I want us to have the right team.”

The right team would take time. Some are a little concerned that waiting could dampen the public's appetite for baseball. Robert M. Berry, general manager of the metropolitan authority, which owns The Diamond, says there are still expenses to pay if the current facility remains dark in 2009. Just maintaining the field and the facility even without a tenant would likely run upward of $200,000 for the year.

Still, it's a small price to pay for making a hasty decision, says Rosentraub, whose latest book, “Major League Winners: How Cities Turned Subsidies into Revitalized Downtowns,” is due out next year.

Richmond could learn from the cities featured in his book, where officials did thoughtful analysis before jumping into bed with new baseball teams and stadium developers. Study the market, poll former season ticket holders, conduct focus groups, get the community involved and start a dialogue, he recommends. Operating in a vacuum, as the Wilder administration has done to this point, is a recipe for poor decision making.

“Go at it as you would any major strategic initiative,” Rosentraub says. “Find out what people want. Don't sell yourself short.” S