In the aftermath of a woman’s murder, her family tries to keep her dream in business. 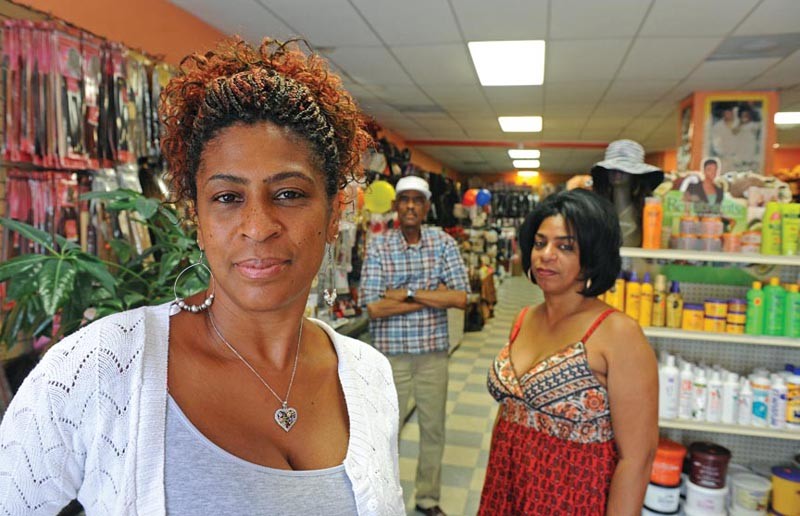 More than a year after her death, Kate L. Johnson keeps showing up in her North Side beauty-supply shop.

She’s there whenever a customer talks about Kate’s knack for picking perfectly matched hair extensions. She’s there when somebody remembers how Kate gave them a wig for her mother’s funeral, or for their daughter when cancer took her hair.

“Every day somebody has you in tears,” says Sharon Scales, Johnson’s oldest sister. That’s the reason she and the rest of the family have continued to run Kate’s Beauty Express: to keep Kate with them.

But in these times, and in a distressed commercial district, how much longer can they continue? “We battle every day to keep this place open,” Scales says.

Growing up in Highland Park, the three Johnson sisters were as close as sisters could be. People turned their names into a single word: “Sharonjanetkate.” As adults, Janet and Kate bought adjacent houses and carried on conversations from their bathroom windows. Sharon lived just a few blocks away.

Kate was the baby, the silly one — “a very joking little girl,” her father says. Like her older sisters, she worked as a nurse. But she always wanted to be an entrepreneur. A little more than five years ago, she opened a booth called Kate’s Beauty World in the Fire House 15 shops on Meadowbridge Road. Then, with business partner Hassan Ibrahim Ahmad al-Sari, Johnson expanded into a corner location on Brookland Park Boulevard.

The business was doing well, Scales says, but Johnson’s relationship — both romantic and financial — with al-Sari had begun to fray. “So she broke loose,” Scales says, and opened Kate’s Beauty Express at 102 W. Brookland Park Blvd.

On May 29, 2010, Kate Johnson dropped off her youngest children with Scales and went out for a night on the town. Around 10:30 p.m. she walked into a karaoke bar at the Clarion Hotel near the airport. A few minutes later, al-Sari followed her in. He asked Johnson to come outside and talk with him. She hesitated, then joined him. He shot her several times and fled.

Scales will never forget that late-night call and the rush to the hospital. As soon as the nurse spoke the words, “I need you to identify,” Johnson fell to the floor. It was her baby sister.

On June 1, 2010, al-Sari’s body was found floating in the James River near Rocketts Landing. He’d shot himself in the head.

Looking back, the danger signs were clear. Al-Sari, a married man, had stalked and threatened Johnson. “Every time I looked up, it seemed it was like he was somewhere around,” Scales says. Johnson took out an assault warrant against al-Sari in April 2009 after she reported that he’d grabbed her and hit her. “Please be careful,” Scales told her sister.

Even more alarming, al-Sari got into an altercation with an acquaintance across the street from Kate’s Beauty Express, two days before he shot Johnson. Police records confirm an incident of “weapon law violations” in the 100 block of West Brookland Park Boulevard shortly before 5 p.m. on May 27, 2010. It’s unclear who was brandishing the gun.

Whatever might have been, Kate Johnson was gone — just eight months after her mother, Georgia Johnson, died of diabetes-related renal failure. Kate left four children, now ages 20, 16, 11 and 10. Her oldest son, Charles, joined the Army Reserve. A judge ordered that her youngest son and daughter go to Louisiana to live with their father. He agreed to send them back to Richmond for summer breaks and some holidays, Scales says, but she hasn’t seen the children since her sister’s death.

The fractured family vowed to keep one thing together: Kate’s store.

The small shop in the salon-heavy North Side commercial district is packed with wigs, real-hair extensions, natural hair-care products, fragrant oils, costume jewelry and bras. Most days, either Scales (who also works as a school nurse) or her sister Janet Johnson is behind the counter, where a Polaroid of a young Kate is taped to the register. Their father, Edward Johnson, is there too; he calls himself the security guy. Scales’ 22-year-old daughter Kristy Johnson-Scales is the resident expert on wigs and hair extensions, the one who taught her mother and aunt what a “1-B 27 with 8-inch” meant.

Running the business is “difficult,” Scales says. “Very difficult.” Trends change in an instant, from long, curly ponytails this week to blond bobs the next. Suppliers often tell Scales that other local stores have already purchased all the inventory of the current hot item. (Scales suspects discrimination. Kate’s Beauty Express is, she believes, Richmond’s only black-owned beauty supply store in an Asian-dominated industry.) So instead of hard-selling the $120 top-of-the-line Remy hair, she offers personalized recommendations and “good hair at good prices. Pocketbook prices.”

Despite the challenges, the family plans to keep the store going, Scales says. They know Kate’s watching them. No doubt “she’s cutting up, up there,” Scales says — until her sisters get there, and tell her to behave. S