The new president of the Visual Arts Center has an eye on results, accountability and expansion. 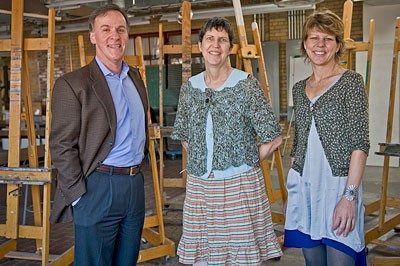 It's been quite a while since politicians first dragged out that now-tired trope about how government should run like a business, but Sam Davis III figures that it's past time that nonprofits also got the message.

“This is a business too,” says Davis, who was hired in September as president and chief executive of the Visual Arts Center of Richmond. “This is just as serious a business as investment management or running a building-materials business. It's just as complex and has the same financials, the same personnel management — all the same challenges.”

Formerly an independent investment consultant to high net-worth families such as the Ukrops, Davis inherits the arts center from an impressive predecessor. During her decade-long tenure, Jo Kennedy transfigured the center, changing its name from the ambiguous Hand Workshop to the less confusing Visual Arts Center and vastly expanding its class offerings. She also raised $6 million to buy and renovate the center's West Main Street home and grew its assets from $3,000 to more than $5 million.

Davis sees his role as building on the foundation that the retired Kennedy established, expanding the arts center's credibility and regional reputation, while making it more results-driven, more accountable, and most importantly, more attractive to donors and less dependent on chasing grants.

One of Davis' key goals is to establish regional satellite arts centers, expanding the Visual Arts Center of Richmond's reach into the suburbs. “People in Short Pump don't know we exist,” he says. “We're not getting people from the West End and southern Chesterfield County. Why? They never heard of us. And to some extent, they don't want to come into the city.”

While that could be disappointing to a longtime Fan District resident, Davis is a realist. “We've got to go to them,” he says. “We've got to go to where the audiences are and not wait for them to come to us.” Davis praises the Children's Museum of Richmond's new Short Pump branch, and sees a day soon when West End parents might drop off their children for a program at the Children's Museum and then head over to a nearby branch of the Visual Arts Center to take a pottery or photography class.

“People want what we have,” Davis says. “There's every reason to think the families in Twin Hickory want the same things that the families in the Fan want. So we've got to be available to them, and no one else is meeting their needs.”

Among the changes Davis and staff have instituted include making sure all of the arts center's educational offerings for children are based on Virginia's Standards of Learning, known as the SOLs. They're also establishing evaluation tools to measure outcomes for the art programs reaching at-risk children.

“Looking at something like the SOLs, we can really start to measure the longer-term effects that art can have on expression and on confidence and being more thoughtful,” says Visual Arts Center's Aimee Joyaux. “All those buzzwords like creativity and innovation. But we do need it as a nation — creativity is a skill set and there are great skills that artists have that I don't think they realize apply in the business world and they do have these skills.”

To that end, Davis is working to make the center more inviting to the general public. One of the great revelations he's found about the center, he says, is that it's partly an entertainment business. As such, he says, the center needs to strive to offer more art classes and be open seven days a week, especially on evenings and weekends.

“There's kind of a 9-to-5 mindset in nonprofits,” Davis says, but “our customers don't work 9 to 5, people who run movie theaters don't work 9 to 5, and neither can we. What are you going to do on a February Sunday afternoon unless you're a football fan or go to the movies? You could come here and make art.”

Joyaux says that the center will offer shorter class periods — weeks instead of months — so that people can try out more classes and see what interests them. “We're finding a lot of people are taking classes based on their schedule and not their interests,” she says. “We want to get them excited that almost anything we do here will be fun.”

The center will also open for the First Fridays Art Walks and experiment with fun events such as screening films — Davis hopes to work with the James River Film Festival in the future.

Hanging on the new president's office wall behind his desk is a cute ceramic bas relief of a girl's face. His daughter Hannah made it when she was a child attending classes at the center. She's now a successful advertising executive in New York. His son, Peter, is a New York-based photographer and filmmaker. (Their mother, Davis' wife, Susan, is a senior vice president at the Community Foundation.)

While Davis has a great appreciation for the arts, he's been firmly planted in the business world: A former plant manager for Philip Morris USA, he later worked in urban redevelopment and founded Virginia Commonwealth University's real-estate foundation. He taught strategic management classes as an adjunct at VCU, and then started his consulting business, advising high net-worth families and their nonprofit foundations.

An entrepreneur at heart, Davis says: “I finally found the business I wanted to run. It wouldn't have been the one I would have told you about a year ago, but every moment I've been here has proven to be more exciting than the one before it.”