The rise of Rep. Eric Cantor and the midterm election's mixed signals. 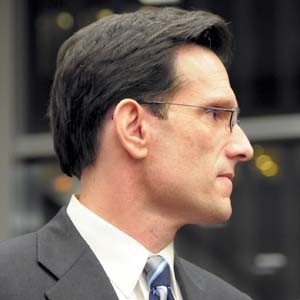 By far the biggest impact on Richmond from last week's midterm election that saw Republicans take control of the House of Representatives is the continued rise of hometown favorite Eric Cantor.

Cantor quickly was awash in glowing media. London's Economist magazine had him on its cover riding a horse and clutching an American flag against a backdrop of the U.S. Capitol with six other GOP cowboy and cowgirl stars, including Sarah Palin. The Richmond Times-Dispatch served up yet another fawning, front-page profile. And Cantor was a featured guest on Sunday morning news programs, such as “Fox News Sunday.”

President Barack Obama, taking blame for the Nov. 2 drubbing, offered an olive branch of compromise. But Cantor quickly smacked it back, saying his role is to put the brakes on spending, defund health-care reform and extend tax breaks for the richest Americans that are due to expire Jan. 1.

Moves such as these signal that Cantor and his Republican victors are more likely to continue to dig in as the “party of no” rather than come up with more creative approaches to dealing with a jobless economic recovery and insuring that tax revenue starts growing again as the economy picks up steam.

Moreover, no matter how positively Republicans cast their victory, they'll ensure little progress during the next two years if they serve up nothing but obstructionism on health care and attempt to deconstruct how Obama and the Democrats tried to deal with the worst recession since the 1930s.

For one thing, they didn't take the Senate, and Obama still has veto power — making any effort to repeal health-care reform unlikely. And they may not have the solid mandate that they advertise, at least in Virginia.

Democratic Congressman Tom Perriello lost in the conservative 5th District after backing Obama on many issues, including health care. Democrat Glenn Nye, in the 2nd District, lost because, for one reason, he broke with Obama on health care. Rick Boucher, a 14-term congressman from the state's coal-country 9th, lost because he backed cap-and-trade legislation to control global warming. Real cap and trade is quite a ways into the future, however, and the boom, if any, in the state's coal industry is from exporting metallurgical coal to Chinese steel mills, which would not be affected by any U.S. cap and trade law.

The last big Republican victory occurred in 1994 partly over disgust with Hillary Clinton's push to reform health care. The GOP managed to win both houses and that, after shutting down government for a while, did result in real bipartisan compromise that gave the country such far-reaching benefits as welfare reform and a balanced budget with virtually no deficit.

Without the Senate, Cantor and his fellow Republicans don't have the same clout. So they have basically two choices: They can be obstructionists or attempt to compromise with the Democrat-controlled Senate and the White House.

With his heady victory, Cantor is sending strong signals that he'll take the former route. If he's lucky, he'll lay the foundation for bigger victories in the 2012 elections. Meanwhile, he and his team may wind up squandering two critical years in the nation's recovery. S