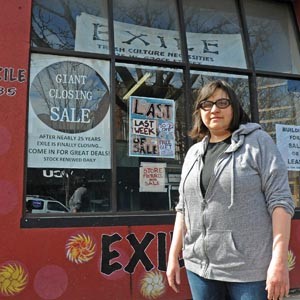 Saturday marked the end of an era on West Grace Street. Almost 25 years after its creation, clothing, thrift and oddity boutique Exile shut its doors forever.

After spending 10 years in the New York music scene, owner Mimi Regelson opened the store in 1986. Capitalizing on its original location and her then-business partner Charlie Ilario's infatuation with the Rolling Stones, Exile on Main Street stole its name from the famous Stones album. After Exile was broken into four times in its first six months, they relocated the store to a townhouse on West Grace Street.

“There was no store like it at the time,” Regelson says. For years Exile was the only store in Richmond that catered to the alternative set.

“She had the only store you could get punk rock clothes. That was it,” says Ryan Gardner, owner of Accent on Wood and a patron since Exile's beginning.

“Exile's been central to the punk rock and gothic scenes in Richmond since the beginning,” says RVAFreaks.com founder Scott Takahashi.

Among the racks of sunglasses, leather jackets, old dresses, cowboy boots and Doc Martens knockoffs, Regelson made generations of Richmonders feel at home.

“It was important to me that people came feeling they had a good experience. … Which is why we have a dead cat in the store,” Regelson says. The stuffed cat behind a glass case was a longtime fixture. Customers would often bring their friends specifically to view the cat, and many asked about purchasing it since Regelson announced the store was closing.

Another oddity of the store's past was the dinosaur head, mounted as if someone had shot it for a hunting trophy. The dinosaur now resides with a friend of Regelson's in Baltimore.

The store's name ended up becoming somewhat serendipitous. “I didn't know I'd be married to a Tibetan exile,” Regelson says of her husband of nine years, Tsondu Kikhangparra. She met Kikhangparra on a family trip to Nepal. “He's an American citizen, but he's still ‘in exile' because of the store.”

After her elderly landlord sold the townhouse Exile resided in to Virginia Commonwealth University, Regelson moved a block down Grace Street near the Village Cafe in 2006. Now she's moving on.

Regelson isn't being forced out, she says: “I just felt like 24 and a half years is enough time to do one thing.” She's “open to whatever unfolds,” but will still maintain her two online stores and help her mother run an antique shop. While Regelson's future is open, the fate of the store's famous stuffed cat has been determined.

“I'm not selling the cat. The cat's coming home with me.” S