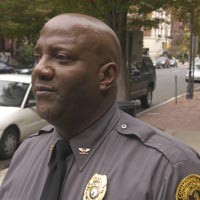 Fuller, a diabetic, faces trial next month on charges of soliciting sex with a 14-year-old girl in Chesterfield County. He was admitted to the downtown hospital sometime in the last two weeks, sources tell Style. Fuller, 50, was found by a neighbor lying in the parking lot outside his apartment on Meadowfield Court in Henrico County, these sources say.

“My understanding is that there was a diabetic episode,” Arnold Henderson, Fuller's attorney, told Style Weekly Monday afternoon. “I have no idea what his physical state is right now. I am told he is still in critical care.”

Henderson couldn't confirm when Fuller was admitted to the hospital, but said it was before Friday, June 12.

University officials will confirm only that Fuller was at its hospital. Information regarding his condition is being withheld at the family's request, according to a university spokeswoman.

This isn't the first time Fuller has been hospitalized after a diabetic episode. About two years ago, Fuller passed out while at the campus police headquarters and was briefly hospitalized, say sources close to the VCU police department.

Fuller is scheduled to face trial in Chesterfield Circuit Court on July 8. He was arrested Jan. 28 as part of an Internet sting in which Chesterfield detectives posed as minors and attempted to lure predators seeking sex with children.

In addition to those charges, Style learned in February that the university also investigated internal complaints against Fuller and found an electronic correspondence that was sexually explicit between Fuller and a girl claiming to be 17.