With the opening of a $25 million anchor, the American Civil War Museum invigorates the evocative Tredegar site.

Scott Elmquist The recently-completed American Civil War Museum appears architecturally as a sheer glass connector between buildings that once comprised Tredegar Ironworks. The building at right was built in 2005 as an entrance pavilion to the foundry building.

A museum, like a university, traces its founding date to institutional origins.

Who knew that the University of Richmond, dating to 1830, was once known as the Virginia Baptist Education Society?

The American Civil War Museum is Richmond's oldest museum. It was opened in 1896 as the Confederate Memorial Literary Society with the mission of preserving the White House of the Confederacy from destruction. It was the home of President Jefferson Davis and his family from 1861-1865, and is at East Clay and North 12th streets.

With the opening on Saturday, May 4, of its new building at 500 Tredegar St., the American Civil War Museum can also boast being Richmond's newest museum structure. It is a 29,000-square-foot, $25 million, and architecturally pitch-perfect structure that manages to do at least two things at once, and each quite well. 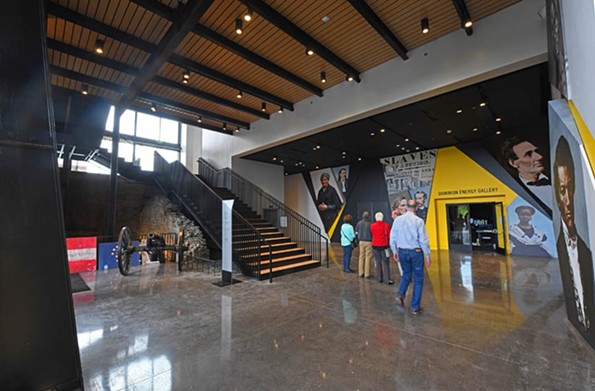 First, from the exterior when viewed across the broad, stone-paved plaza, it appears to be a large but elegant glass-encased park pavilion. The architect, 3North, injected the structure with gracefulness and a sense of welcome to what was previously a somewhat somber and confusing site with its assemblage of mostly 19th-century, red-brick industrial buildings.

For decades, these various brick buildings served Tredegar Iron Works operations, once the South's largest foundry, and more recently as the Civil War museum's riverfront outpost. Another tenant of the campus continues to be the Richmond National Battlefield Park's visitor center.

Secondly, the new two-story building, measuring roughly 160 feet by 120 feet, is an educational and cultural destination for archives. The building is injected into the historic slope of Gambles Hill and houses the museum's extensive and world-renowned collection of documents, books, uniforms, flags, weapons, records and all manner of artifacts pertaining to the period from 1861 to 1865, when the Confederate States of America waged war with the Union.

A permanent gallery of 6,000 square feet uses many of these objects to illuminate the history— not just the political and military stories — but how the brutal Civil War affected a range of people, ethnicities and races whose lives and worlds were altered, shattered, or perhaps liberated by the brutal conflict. 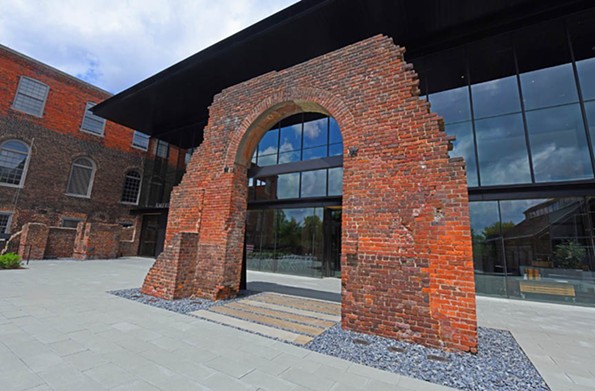 In 2013, the American Civil War Museum was created by the merger of the Museum of the Confederacy with Historic Tredegar. The latter was a museum whose core facility was itself an industrial and architectural artifact, the former gun foundry of Tredegar, a manufacturer of munitions and metal items that had been established there in 1836. It was here, on a north bank of the James River, that the armor plates were produced for the Merrimac, or Virginia, which battled the Union Monitor in March 1862 at Hampton Roads. It was the world's first battle between ironclad ships.

A few blocks up the hill in Court End, the Museum of the Confederacy had been housed in a strikingly modern building constructed in 1976 to house and display its collections. The poured concrete structure was adjacent to the Confederate White House. During the 1980s, the neoclassical styled mansion had been painstakingly restored and furnished to its Civil War appearance.

By that time, however, the once-elegant residential neighborhood had long since grown into a densely built medical center as Virginia Commonwealth University continued its dramatic programmatic and physical growth. The domestic-scaled Confederate museum found itself being strangled as it sought to steer visitors through the tightly configured medical center. Now, with the Confederate collections and library reinstalled at Tredegar, at the White House it's business as usual, along with two other National Historic Landmark house museums nearby, the John Marshall residence, and the Wickham house, which is part of the historic Valentine complex that focuses on Richmond history.

The White House of the Confederacy, which was repurposed as a city public school soon after the Civil War, was rescued by a tight-knit group of mostly Southern white women who, in the late 1890s, set out to assemble collections of Confederate artifacts. Similarly, the Tredegar Ironworks owes its survival to a similarly, highly-focused effort. This preservation effort was the passion of Floyd Dewey Gottwald, a Richmonder who became the chief executive of Albemarle Paper Co. and later, Ethyl Corp.

In 1957, Gottwald and his officers were developing a corporate office park downtown on South Third Street on the knoll of Gambles Hill. This once-fashionable neighborhood was frayed and the company replaced old townhouses with a gleaming, white-painted brick headquarters building modeled on the Williamsburg Inn in the colonial capital. The building's cupola, inspired by the colonial Governor's Palace, was added later. In the 1950s, the corporate office was adjacent to the public Gamble Hill Park with its commemorative cross marking the site of the first English settlement at the falls in 1607,

Gottwald not only acquired the hilltop site in 1957, but 22 acres of adjacent hillside, river frontage and Brown's Island. The property's brick Tredegar structures and remains, which some romantics and historians likened to Roman ruins such as the Baths of Caracalla, were partial rubble but intoxicating. At one point, Gottwald contemplated constructing a modern corrugated box factory at the foot of the hill amid the old ironworks, perhaps even building a replica of the Virginia Manufactory of Arms, a building destroyed in the evacuation fire of 1865.

But there were environmental issues with possible effluent from the proposed box plant and operational challenges that caused the project to be shelved.

While Tredegar survived that possible demolition, in learning of Tredegar's history, Gottwald was increasingly intrigued. When flooding in 1972 from Tropical Storm Agnes caused the Tredegar foundry roof to collapse, rather than demolish the building, Gottwald had it restored. During this period, he came to appreciate that his great-grandparents, Jacob Freyfogle, who had emigrated to Richmond around 1840 from what is today Baden-Wurttemburg in southwestern Germany, and Caroline Rebman Freyfogle, had owned property and a house along the canal, which they had inherited. Although the house had been destroyed in the 1865 evacuation fire at the close of the Civil War, for Gottwald, the preservation and development of the historic property was personal. 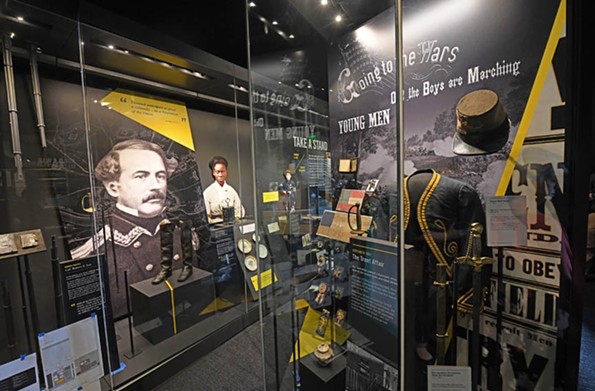 Also during the early 1970s, as Tredegar site restoration was underway, nearby the Downtown Expressway and the iconic Federal Reserve Bank of Richmond headquarters, were being built.

Later in 1994, Tredegar received additional focus and restoration when the Valentine Riverside was opened as a museum of industrial history. The restored foundry became a multipurpose event space.

Simultaneously, significant land along the downtown riverfront was being developed as landscaped recreational parkland, performance venues and increasingly as a suburbanlike office park.

Currently, the Tredegar complex serves as an architectural and historical anchor with its brick smokestack rising perpendicular to a flat, handsome and bucolic stretch of landscape where locals, out-of-towners, and downtown workers from surrounding towering buildings amble along paths and roadways.

The T. Tyler Potterfield Bridge has become a major destination here, and now the American Civil War Museum, with its transparent, elegant and front curtain wall of glass, creates a major focal point. Previously, visitors approached the museum by passing through a more modest structure that was scaled to the spirit and size of the foundry building.
Architecturally, the spirit of the new building is highly welcoming.

It is approached on foot by a broad plaza that is paved in large, gray stone. There is a slight uphill incline as the building has been raised 4 feet above the site to place it out of the flood plain.

The new museum is deceptively modest in design. The overarching goal was to protect the objects, complement the existing historical buildings and ruins, and create an excellent visitor experience. A hint that there might also be architectural objects protected behind the 31-foot, front glass wall is apparent when one sees a 16-foot brick arch that sits slightly left of center near the entrance. Stepping inside, seven additional, 16-foot high arches are aligned to create a brick backdrop, or screen. This defines the rear section of a grand, 25-foot deep reception lobby.

Beyond the first floor lobby is a 75-seat orientation theater and the permanent gallery with 6,000 square feet of display space. Solid Light was the exhibition designer.

A grand, but minimalist open staircase with oak treads beckons visitors to the second floor. Arriving at the top of the stairs, one is facing the glass wall and can look out to the museum campus and a dramatic vista of the James River beyond. A gallery for changing exhibits, the library, collections storage and staff offices are on this floor.

If the front entrance court has established a welcoming public gathering place, there is a secondary gathering spot, an upper terrace west of the new building. Memorable for the sculpture of Abraham Lincoln and his son Tad, who visited Richmond in April 1865, this space previously seemed isolated and remote. It is now well-articulated by the museum's western wall, which frames the eastern side of the terrace. While pausing in this contemplative space, visitors can enjoy the beauty of the masonry wall of narrow bricks. Here, the architect wisely broke away from using red brick. The narrow, 1-by-14-inch bricks, are cast in various shades that suggest, appropriately enough, cast iron hues. If the choice of material was savvy, the reality of experiencing the bricks change hues with the shifting daylight is equally delightful. Although there are no windows toward the rear of this blocky building, the tones and texture of the brick create interest.

Another aspect of the building design is noticeable from the upper terrace as well. This is where the broad roof overhang, which extends across the front facade dramatically, takes a turn and protrudes for a few feet to top this western wall. Draper Aden was the civil engineer, and Whiting-Turner, the contractor for this handsomely-executed, and challenging project considering the delicacy of working on a virtual archeological site.

The American Civil War Museum, for 123 years and five generations now-- has been telling the story of arguably Richmond's most important place in our nation's history. The museum's narrative has changed with the times, but always reflected our city's place as the former Confederate capital city. 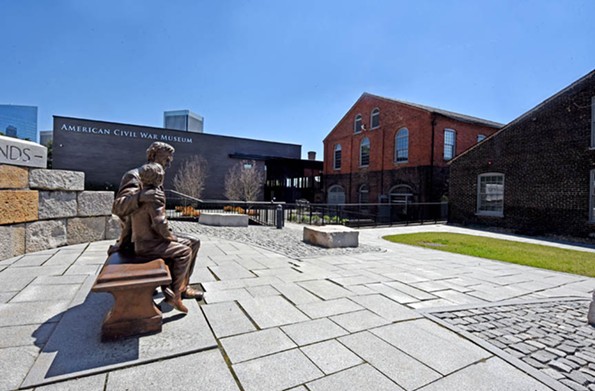 At a time when our national dialogue is fraught and polarized with how to deal with the Civil War and is legacy, it speaks well that Richmond, and this museum, have placed this destination squarely within one of the most-visited, beautiful and beloved sections of the city—on the riverbank where Richmond developed.

Perhaps in this tranquil and respectful setting, museum-goers can seek answers and shape meaningful questions as our public debates continue.