"Idea to Image" at the University of Richmond charts the process of prints. 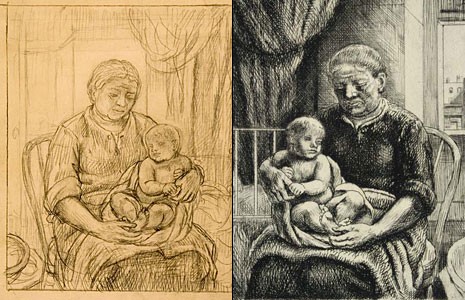 Does an artist always know best? That's the premise behind the University of Richmond Museums' new show, "Idea to Image: Process, States and Proofs from the Print Collection."

"It's a wonderful opportunity to understand the printmaking process and see the variables and various states of a print," says Richard Waller, the museums' executive director.

Visitors to the show — featuring more than 70 works on paper — will be able to see a wide range of printing methods, including lithographs, woodcuts and etchings from the 17th century to today.

The compelling part for viewers will be deciding whether an artist's final print is the strongest piece. The exhibit will be hung in a way that displays the process the printmaker takes from sketch or drawing to completed print, including some actual blocks and plates used to make prints in the exhibit.

John Taylor Arms' "Crystal and Jade" shows the same print, once on pale blue paper and another time on white. Do the transparency of the crystal goblet and the translucence of the jade container show better on blue or white? The viewer's eye will decide.

In "The Piazetta, Venice," two states of the Donald Shaw McLaughlin etching show how radically the artist can change his mind while work progresses on an image. In the first brown-inked version, there's a woman's figure in the extreme foreground and little shading. In the second version with black ink, that figure is gone and there are smaller midground figures, some pigeons and striking shading which increase the sense of depth. Neither is better; they're just different.

Major artistic names are represented in this show, including Honoré Daumier, Francisco Goya, Jean-François Millet, William Hogarth and Antoine Watteau. "Prints can inform the way you look at an artist's paintings," Waller says. "Millet, for example, used paintings as the base for his prints, so when you look at his prints, you understand his painting better. And certainly Goya, too."

The two Hogarth prints of "Garrick in Character of Richard III" challenge patrons to find the differences. The prints were made decades apart using different plates. By looking back and forth between the two, the viewer can play an endless game of spot the changes.

What's fascinating when you study prints is seeing an artist enjoying the change and the experimentation. The creators give us several states because they're continuing the process. It doesn't mean they didn't like stage two or three.

The idea of connoisseurship is something very big to print. There are differences of opinion with curators, dealers and scholars — arguments ensue. What was the artist's original idea? How does this print convey that?

That's part of the appeal for Waller, he says: "I'm hoping this show makes people question and ask things." S

"Idea to Image: Process, States and Proofs from the Print Collection" will be on display Oct. 16 through April 1 at the Joel and Lila Harnett Museum at the University of Richmond. "Connoisseurship: Looking at Old Master Prints," a free program associated with the exhibit, will be featured Nov. 18 from 2-4 p.m., with a benefit print sale from 4-6 p.m.

Arts and Culture Joel and Lila Harnett Museum of Art