Organizers behind a Richmond coalition call for officials to address the needs of displaced public housing residents. 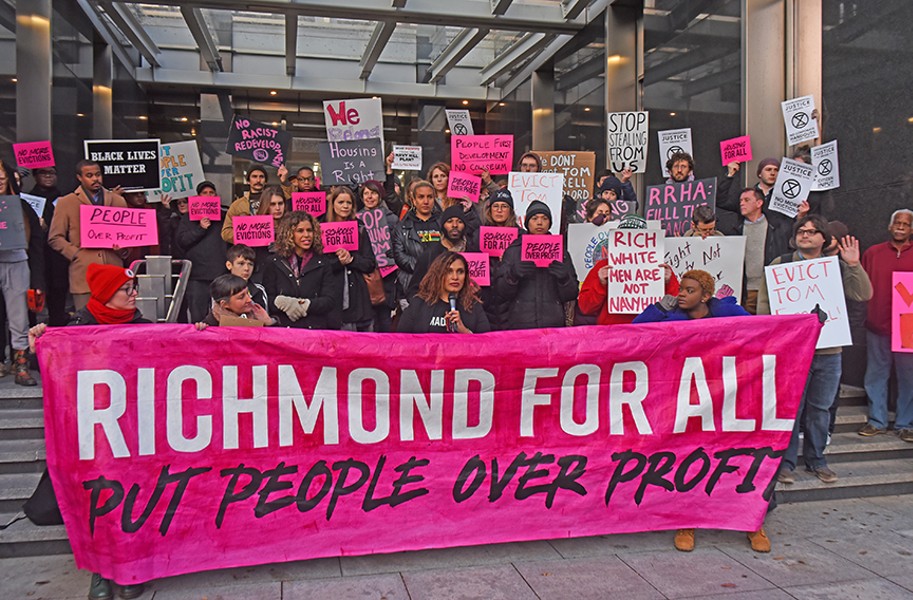 Scott Elmquist Activists gather in front of City Hall on Nov. 12 to protest Navy Hill. Many also rallied at the Richmond Redevelopment and Housing Authority headquarters in January.

Nearly a hundred activists gather in front of City Hall before a Nov. 12 City Council meeting to protest Navy Hill. Among the crowd are many of the same activists who rallied in front of the Richmond Redevelopment and Housing Authority headquarters in January and who mobilized to fight evictions of as many as one in eight Creighton Court residents recently.

Omari Al-Qadaffi, a longtime public housing organizer, says that Navy Hill is part of a long-standing plan by the housing authority to demolish public housing.

“The plan was formulated by [former authority chief executive] T.K. Somanath, and he’s the affordable housing consultant for Navy Hill,” Al-Qadaffi says. He points to the recent evictions in Creighton Court as phase one. “They think they’re going to redevelop Creighton Court first, so the evictions and vacancy rates are highest there.”

In a statement, the authority’s chief executive, Damon Duncan, disputes that the vacancy rate was part of a plan to demolish Creighton, and takes issue with the term evictions, noting that residents were in court for “unlawful detainers.” Unlawful detainers are the court orders tenants are served after eviction notifications and before execution of the writs of possession that remove them from their homes.

However, according to an agency plan, the authority is planning to demolish Creighton Court. Residents will be sent to new mixed-income apartment complexes like Armstrong Renaissance with project-based vouchers. About Armstrong, Al-Qadaffi says, “It’s a high percentage of single-family apartments. They don’t want families.” He expects affordable housing units at Navy Hill to also favor single people, pushing families out.

Navy Hill didn’t have a statement on apartment sizes by time of publication, but a representative says it will build 200 units of affordable housing available through vouchers and dedicate $150 million in projected revenues to housing and homelessness services. Critics call that projection speculative and note it’s a nonbinding commitment that can be freely revoked.

“They’ll thrust black families into a real market that discriminates against them,” says Al-Qadaffi about the vouchers. A city anti-poverty report from 2013 agrees. Al-Qadaffi quoted from that report at an authority meeting July 17: “Relying on vouchers as a primary means of providing housing in Richmond perpetuates the racially-concentrated areas of poverty we are federally mandated to decrease.”

Richard Meagher, an associate professor of political science at Randolph-Macon College, describes the mixed-income apartment plans on his blog, RVA Politics, as “a middle finger from the city’s elites.” He says the plan was lifted from Duncan’s strategy at his last job, in Elgin, Illinois, which the Daily Herald described as “the end of public housing.” While this approach is better for a city’s bottom line, Meagher writes that it will increase homelessness and hurt families.

Richmond for All organizers are calling for one-to-one brick-and-mortar replacement, among them Kristin Reed and Jasmine Leeward, organizers of the anti-Navy Hill rally. Reed also attended the July 17 authority meeting, where she addressed Duncan, quoting comments attributed to him.

Like Al-Qadaffi, Reed says that Navy Hill will take tax money away from priorities like public housing and schools. She describes it as the vanity project of one man: Dominion Energy’s chief executive, Thomas F. Farrell II. He heads the NH District Corp. nonprofit that proposed Navy Hill. “This RFP was designed for one bidder. We won’t know what’s possible on the site without a good faith RFP,” she adds.

Reed isn’t interested in alternatives or compromises when it comes to Navy Hill.

“We’re not looking to renegotiate the plan, we oppose it,” she says, rejecting public financing. Leeward agrees. “This is a 30-year protection scheme for corporations. There is a lot of development in Richmond already. TIFs aren’t for cities that are growing like Richmond,” she says, noting that they’re often used to fund public projects like city halls, parks and libraries.

Both were hopeful about the Navy Hill Development Advisory Commission, appointed by City Council. At a recent meeting, its vice chairman, John Gerner, raised issues with the projections. Gerner, the managing director of Leisure Business Advisers, says the city would have to take on $300 million in bonds for the coliseum portion of Navy Hill, and estimated that new revenue from the 80-block area the financing district encompasses would take 28 years to pay off the bond. For Richmond Magazine, Rodrigo Arriaza wrote that Gerner described himself as an adviser with a duty to highlight the risks. Gerner is quoted as saying there are no guarantees, and “if there are unexpected changes that we don’t know about, ultimately, that money’s at risk, too.”

Despite rumors that some members of the commission are there to support Navy Hill, Reed says the information that’s come out of the meetings to date convinces her the final report will be negative. She also ranks as a positive the recent election of Stephanie Lynch to the 5th District City Council seat. She thinks Lynch will vote no on the development: “She described it as reckless.” She cites Lynch, a local social worker, as an ally against public-housing evictions.

“I’ve worked with families in the big six courts,” Lynch says later, by phone, describing evictions as devastating. For a first step, she’s looking for data. “We need all the information in one easy-to-see dashboard.” When it comes to specifics, she’ll work with housing activists to make sure council has the information it needs to assess public housing issues.

When it comes to one-for-one brick and mortar versus voucher systems, Lynch says more data is needed there, too, on what residents want.

“ We need to take a resident-centric view,” she explains. “But there must be an option for every resident.” She also advises oversight and caution if the city implements vouchers. “We should be careful where we’re sending people. There are predatory landlords and property managers. We need to compile a list of bad actors.”

Letting residents comment anonymously is crucial, Lynch says. One possibility: Placards with QR codes residents can scan to give feedback. “Seventy-three percent of people in public housing have smartphones, and even older phones can scan QR codes. And we can also distribute paper surveys at the courts, too.”

Time’s on her side. After a judge dismissed the cases, Duncan announced an agency-wide freeze on evictions until January and a re-evaluation of debt-collection practices Nov. 8. The next week, Mayor Levar Stoney announced a task force to bolster the work of his eviction-diversion program, which took effect on July 1 and will include Duncan.

The eviction freeze is a victory, Al-Qadaffi says, but for next steps, he believes the city should implement plans it’s already adopted. “I just wish they’d follow the recommendations of the 2013 city anti-poverty commission. The report doesn’t call for an arena or a transfer station,” he says. Instead, it calls for what he’s asking for: one-to-one brick and mortar replacement and renovation of existing public housing stock, without displacement, accomplished through a resident-centric process.

Or, as he wrote in a Facebook post after the freeze was announced: “A small battle has been won. The fight to put people over profit continues.”