We agree that doing something to help improve the lives of Gilpin Court and Fay Tower residents is a moral imperative.

by Thad Williamson and Adria Scharf 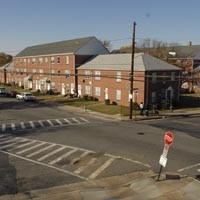 Concentrated poverty and crime — those are the words most Richmonders instinctively think of when they hear the phrase “Gilpin Court.”

It's not difficult to find data to support the popular image of Richmond's oldest and largest public housing development as a distressing exhibit of the city's racial and economic segregation. Census data from 2000 shows the Gilpin Court area has a median household income of just $8,429, and a poverty rate of 73 percent. Ninety-seven percent of neighborhood residents are black. The neighborhood is widely regarded as unsafe.

Consequently, it's not difficult to find well-meaning Richmonders who say “We really ought to do something about Gilpin Court.”

We agree that doing something to help improve the lives of Gilpin Court and Fay Tower residents is a moral imperative. But the first thing we as a community must do in considering the neighborhood's future is assure that future redevelopment leaves no public housing residents worse off than they are now. Second, we must recognize public housing residents as fellow citizens who have a right to play an active role in shaping the area's future.

During the 1990s the idea of breaking up concentrated poverty in urban centers came to dominate federal housing policy. The federal government instituted what became known as the HOPE VI program, which actively supported demolishing older housing projects and replacing them with mixed-income neighborhoods with newer, more attractive public housing options. The catch is that in city after city where HOPE VI redevelopment was implemented, the total number of public housing units declined. In the rush to redevelop, the federal government dropped its longstanding one-for-one replacement rule requiring local public authorities to replace any units demolished with the same number of newly built housing units.

A decade later, evidence suggests that while the HOPE VI developments often did succeed in creating more attractive communities, their impact on poverty reduction was minimal. Some residents were displaced by the program and ended up in other high poverty neighborhoods. Those who were able to move back into the new developments didn't automatically see improvements in their economic prospects.

Simply put, deconcentrating poverty isn't the same thing as ending poverty. You cannot end poverty by reshuffling low-income households around like pieces on a chess board. The way to end poverty is to expand the economic opportunities — jobs, training and education — available to poor people.

If a redevelopment plan truly expands the economic opportunities available to public-housing residents then it might make for a morally justifiable policy. But removing people from their homes without their consent and without a clear plan about where they should go does little to end poverty. It's possible to make Gilpin Court a nicer place without actually helping the people who live there.

That's why it's worrisome that the Richmond Redevelopment and Housing Authority has not guaranteed one-for-one unit replacement as part of its ambitious plans to redevelop the area. The authority's plan, unveiled last winter, calls for transforming the area into a mixed-income neighborhood to be renamed North Jackson Ward. While the plan calls for increasing the number of housing units in the neighborhood, at most 30 percent would be set aside for public-housing residents. That means a maximum of 600 public housing units will be part of the new development, compared with 983 units today — and the housing authority plans to rescreen current residents, which advocates argue will serve to prevent many households from returning.

Where will the other people go? That's the essential question the housing authority must answer before plans go any further. The relevant moral principle in this case is that no public housing resident should be made worse off by a redevelopment plan; and the only way to guarantee that outcome is to commit to one-for-one replacement.

The housing authority plans to offer housing vouchers to those residents who won't be able to return to the redeveloped North Jackson Ward. The problem with that idea is that not all landlords accept vouchers; those that do are also usually in high-poverty neighborhoods and vouchers do not provide housing security. Moreover, such vouchers are contingent on funding from the federal government. The housing authority's recent recall of 163 vouchers it had promised to families underscores that such promises are not a reliable lifeline.

To be sure, Anthony Scott, the housing authority's director, has pledged that there will not be another Blackwell — the now infamous redevelopment of the Blackwell housing project in Manchester that kicked out hundreds of families. The agency has repeatedly said that all displaced residents will end up with a safe and affordable place to live, although there is no specific plan about how this will be accomplished. The agency's Web site promises that displaced residents will receive assistance from a relocation specialist.

Based on the history of housing redevelopment in Richmond and across the country, Gilpin Court residents can be excused for being skeptical of such promises.

At a Sept. 15 community housing forum sponsored by Residents of Public Housing in Richmond Against Mass Eviction (RePHRAME), 175 residents from Gilpin and Fay Towers called on the housing authority to adhere to the following principles: one-for-one housing replacement, giving residents the right to return without having to be rescreened, and greater involvement in the planning, including increased resident representation on the housing authority's board.

Mayor Dwight Jones attended the meeting and says he supports the principle of one-to-one replacement. Five members of City Council were also present. Unfortunately, neither Scott nor any other decision-maker from the housing authority attended. Scott did meet with RePHRAME on Sept. 28, as this article was going to press.

Our city has a history of displacing low-income black communities in the name of redevelopment. We continue to live with the legacies, and the trauma, of previous planning decisions that did just that. Given this history, we as a city have an obligation to learn from our past and to make sure that we do things differently this time.  S

Thad Williamson is an assistant professor of leadership studies at the University of Richmond. Adria Scharf is executive director of the Richmond Peace Education Center.