Everyone’s Restaurant: Behind the Scenes at Shockoe Whiskey & Wine 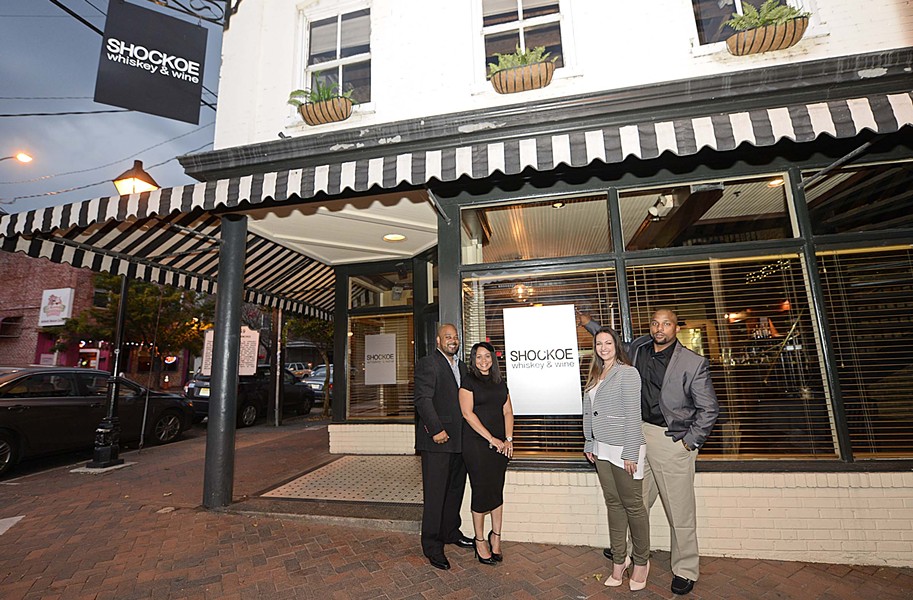 It all began with poetry. And then one thing led to another.

When Chris Randolph moved back to the city a year and a half ago after living in Northern Virginia, it felt as though something was missing in the Richmond scene. Instead of waiting around for things to change, he took matters into his own hands, booking spoken-word and live-music events in Shockoe Bottom.

“Richmond has a population of very, very talented poets that are known nationally and regionally,” Randolph says, “but not locally.”

And then the inevitable happened. Jessica Proffitt, his girlfriend and business partner, suggested that perhaps it was time to get their own venue. That’s when the domino effect began. Audiences generally like a beer in hand at shows. To make that happen, you need an ABC license, and if you have an ABC license, you must sell food. And if you’re selling food, well, suddenly your business has turned into a restaurant.

And thus, Shockoe Whiskey & Wine was born. Randolph and Proffitt found partners in Shawn Minter, Marcus and Tara Smith, and 2020 Experience chef Micah Crumb came on board to create the food.

They were looking for space when they got wind that Julep’s New Southern Cuisine was moving to East Grace Street. “We were here before anyone knew Julep’s was moving,” he says. “[Owner Amy Ayers] was such a great help.”

Crumb’s menu features hearty fare such as lamb chops, rib-eye and crab-stuffed shrimp. The space has been freshened up since Julep’s departure, but it still has the dark-wood vibe that works well with its whiskey offerings.

The concept came from a common problem a lot of couples have when they go out. Proffitt likes wine and Randolph likes whiskey. Visiting a restaurant specializing in one usually limits the choices in the other. “It just made sense,” Randolph says.

When he and his partners leased the space, they didn’t know the 17th Street Farmers’ Market would be undergoing a transformation, and they recently learned that the route for the UCI Road World Championships would go right by the restaurant. It’s been a busy time since the spot opened a month ago, and right now Randolph says he’s only focusing on the tasks in front of him.

“Once you create [something],” he says, “it has its own personality, its own life.” Ayers gave him a piece of advice about running a business that he takes seriously: “Go where it takes you.”