Everclear at the Hat Factory 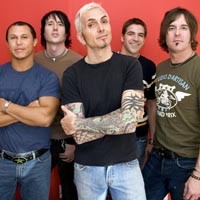 Though the band has endured a number of changes in its supporting lineup through the years, Everclear has been and always will be the brainchild of Art Alexakis. Fueled by the memories of his lower-middle-class upbringing under a single mother in West Los Angeles, Alexakis' musical ensemble rose to great prominence during the latter half of the '90s with its radio-friendly mix of pop, grunge and punk. With songs such as “Everyone to Everyone,” “I Will Buy You a New Life” and “Father of Mine” taking their 1997 record, “So Much for the Afterglow,” to double platinum, Alexakis and Everclear are probably best recognized for the success of their 2000 single, “Wonderful.” Enjoying a healthy career away from the control of major labels, the band is prepping the release of “In a Different Light,” an album of rerecordings tackling the band's familiar hits. Leading up to its release, Everclear performs at the Hat Factory on Friday, Oct. 9, at 8 p.m. $20-$25. 788-4281. — Mike Hilleary