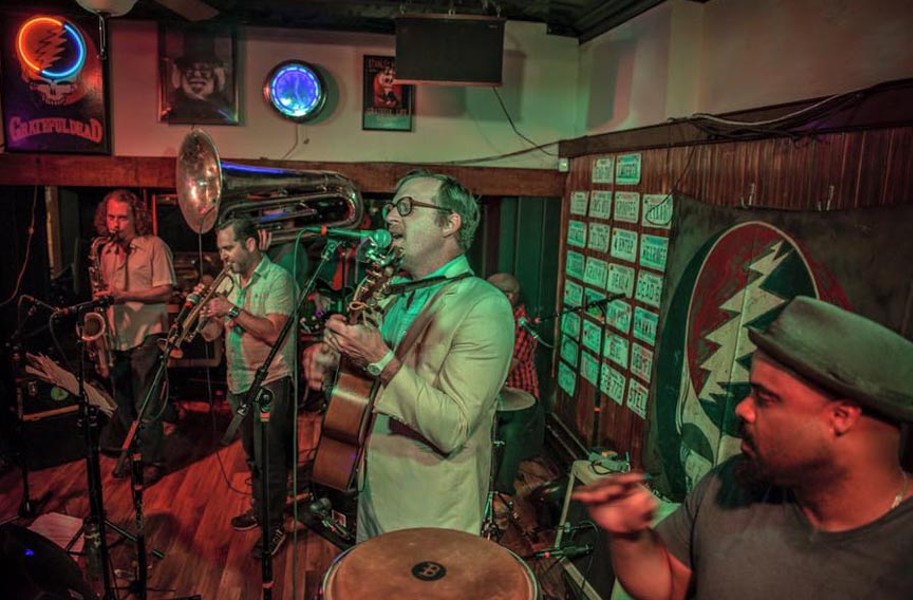 On Thursday, Aug. 31, you can come celebrate the hotly anticipated release of the new Mikrowaves album on Crystal Pistol, "Nice Things" on Thursday night in the back room at Flora. We spoke briefly with longtime local musician Edward Prendergast of Bio Ritmo and Amazing Ghost, who is the frontman for Mikrowaves, about the new album that has been more than a year in the making.

Prendergast: It's a compilation of five new songs and a couple old songs from former bands [Amazing Ghost's "I Getuppa" and "Sum-Sumina"]. We recorded it out at Virginia Moonwalker last year and were just waiting for perfect time to put it out.

This is a large band. Who all's in the group?

I'm playing bass and singing. Kelli Strawbridge is on drums and backing vocals. Russell Lacy is playing guitar and Kent Ippolito is on electric mandola. Kenneka Cook is singing and Hector Barez is playing percussion — on the record Toby Whitaker is playing tuba – but live he's playing trombone, Bob [Miller] is playing trumpet and John Lilley is playing tenor sax.

What direction musically have you been going in?

I'd say more in a rootsy direction. The band has always to me been a combination of Afro-Caribbean, African and New Orleans, you know, blues and stuff. So we're taking those old songs and putting them in this genre. But now I'm writing more for the guitar, blues stuff and it becomes this rhythmic thing with the percussion. It's brogga music.

We just finished doing a video EP of four of the new songs, mixing secondary footage with live footage recorded in Kent's backyard. (Ippilito is the widower of former Pulitzer Prize-winning poet Claudia Emerson.) The band Brunswick is opening the release party, which is John Hulley from No BS, his big band, they have 12 members (we have nine). It's going to be insane, we're trying to start this thing earlier than normal because so many people are involved. We have the album in tapes and CDs, and should be selling them for first time at the show.

Mikrowaves, Brunswick and DJ Rattan at Flora perform at Flora on Thursday, Aug. 31, at 9 p.m. $8. florarva.com.