With his "quiet" band the Evens, punk lifer Ian MacKaye is still bucking the system. 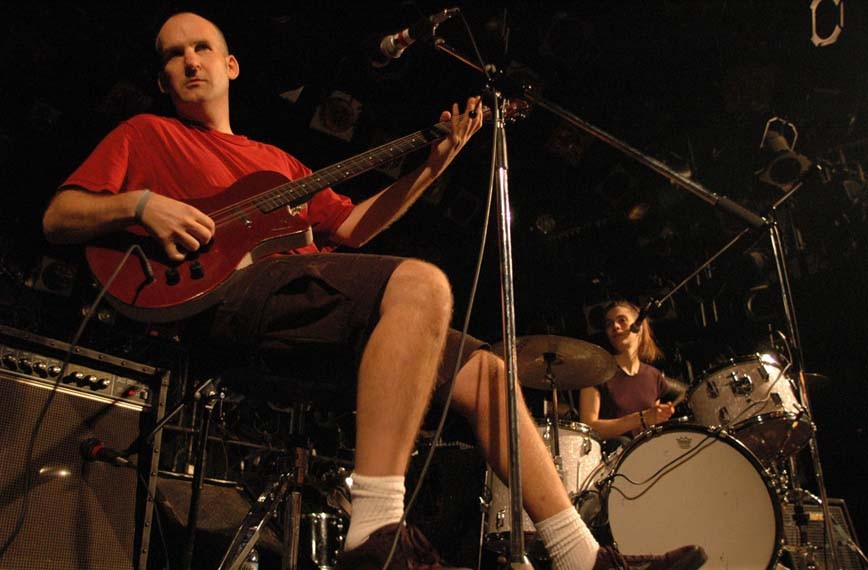 Sitting in the Dischord records house in Arlington, Ian MacKaye is having a hard time figuring out why it was so difficult these past few months to book a show in Richmond for his rock duo, the Evens.

"I think of Richmond as a big arts place, and surely the city must be filled with old rooms nobody uses, old factories, churches," he says. "It drove me crazy."

It's not like he's a stranger. A revered singer and guitarist, an icon among D.I.Y. musicians, MacKaye's arguably is the most well-known Washington music figure in the world. His hardcore band Minor Threat and post-punk band Fugazi were hugely influential since the '80s and '90s, selling hundreds of thousands of records made with artistic integrity intact.

Today the 50-year-old is married to drummer and singer Amy Farina, with whom he has a 4-year-old son, Carmine, who travels with them to their shows, usually booked within a few hours of Washington. They no longer play traditional venues.

"I was sick of it. Especially now, clubs are so dominated by agencies. People have holds six months out and bands that don't have a booking agent can't even get their foot in the door," MacKaye says. "I don't want to be a part of that. What pushes bands into that situation, or what could we change? Volume."

So with him playing baritone guitar and trading vocals or harmonizing with his wife, the pair began playing churches, bookstores, art galleries, bike shops, including the Children's Museum of Richmond and Gallery5 in Richmond within the last seven years. A song on their new album, "Competing With the Till," explains their view on breaking the rock circuit habit.

"The lyric, 'Our audience is your clientele' — for me, it had a broader spectrum of meaning. Music is a sacred art. It's a form of communication that predates language almost certainly and is part of every civilization," MacKaye explains. "We wanted to get music out of the same old places. The Metro, the Flood Zone — after awhile you kind of knew the scene there, right? We wanted interesting rooms. It's not a bellyache about bars, it's an idea that music should be presented anywhere."

MacKaye recalls seeing musician Jonathan Richman, another former rocker who's long since gone quiet, when he brought his own PA system to the 9:30 Club. "In Holland we played and he followed us," MacKaye says. "When he said he 'didn't want to make music that would hurt a baby's ears,' I thought that was really radical. I don't know him, but his creative navigation inspired me to think of ways Amy and I could do things."

Once a screaming young skinhead in a sea of writhing, sweaty bodies, MacKaye has grown older but not exactly mellowed. The Evens' new album "The Odds" continues to rock with aggressive, pointed rhythms and politically-minded lyrics, though the volume is controlled and the dynamics more nuanced. Get MacKaye started on new changes in promotion, such as Facebook ads, and you can sense the old punk rising.

"The computer and Internet have given people the sense that they're always missing something. They're always posting, 'Look what you're missing,' but they're missing it too! It's like some kind of weird, experiential materialism," he says. "The fact that it's so ubiquitous seems like our society is under a serious attack of delusion. It's all just distractions ultimately, while our employees are murdering people in other parts of the world. You can be stoned on religion, pot, technology — or whatever — but you're not thinking about people killing other people, not for nation's sake but for business, and we're paying them to do it."

"Sometimes you find yourself in turbulent water, and you pull yourself up on a rock, and you look out and see dangerous waters out there but everyone's still swimming," MacKaye says. "That's how I feel about the media. Those motherfuckers are drowning." tweet this

One reason MacKaye rebelled from an early age is that he grew up around feckless hippies in the Georgetown area, the son of a theologian, author and former editor for the Washington Post who in the early '70s ran its then-new religion section.

"Before the Post, my dad was in the White House press corps and his first trip was to Dallas with Kennedy, he was in the motorcade when he was assassinated," MacKaye says. "Later he was at odds with the Post brass, he was a rebel. There was a terrible strike in 1975 and he led the guild out on strike for six months. After that, he was blackballed, given a job as an associate editor for the weekly magazine until he quit and started his own seminarian journal called In Trust."

In fact, early on MacKaye says he wanted to be a journalist, too. But after seeing how the punk movement was covered, he quickly grew disillusioned with that career choice.

"Sometimes you find yourself in turbulent water and you pull yourself up on a rock and you look out and see dangerous waters out there, but everyone's still swimming," he says, laughing. "That's how I feel about the media. Those motherfuckers are drowning."

Luckily for him, making music panned out. He's done well, virtually writing the book on how to grow old while maintaining credibility in the music world — though he still seems acutely aware of how others portray him, which has included accusations of being too judgmental or didactic.

"When a band is important to you, the power of that music is not something they created, it's something you created. I've been reading about my life for so long and been acquainted with people's perception of me for so long. I used to say, 'There's Ian MacKaye [rhymes with day] and Ian MacKaye [rhymes with Thai] and I know which one I am,'" he says. "The whole point was we were kids and anyone could do it. Ironically, the kind of documentation and histories people do about it make us into heroes. Like we had some special fucking magic or juju: It's exactly the opposite."

In a time when artists are constantly judged for their past mistakes, MacKaye can recognize the difference between the performer and the art. "I love Nina Simone, I worship her, but I bet she wasn't easy to deal with. Same with Janis Joplin. Ted Nugent, that guy is clearly troubled. Ted Nugent today would shoot Ted Nugent of the '70s."

He also knows his Richmond bands of yesteryear, saying he loved Burma Jam and notes that the guitarist Pen Rollings of Honor Role "was a genius." Still, all the trouble finding a venue made him curious to hear what's new in RVA land.

"I think Richmond has always had a weird loose-cannon appeal to it. There's an art thing down there that is damaged, weird people making weird art, I love that. It's a little unhinged, which I appreciate," he says. "I don't always love the bands. I always respect them though. They're pursuing an idea or vision and I can tell they're serious. ... I don't think Richmond is thought of as a cultural treasure. But when you exist in that situation when you're not on the cultural map, if you're of there, from there, you think: 'Let's make our own thing. We don't care.' Then there's always the possibility something is abrew."

These days, he would love if people would sing along to his new songs and simply experience being 'in the moment' of the show.

"That's what I dream of, to have the whole room singing along. My position is we're making a show together. It's liberating. Break out. Get away from the computer." S

The Evens play an all-ages show at Plant Zero Events and Art Center on Saturday, March 30. 7 p.m. Tickets are $5 and available at the door.