Even Cowboys Get the Blues 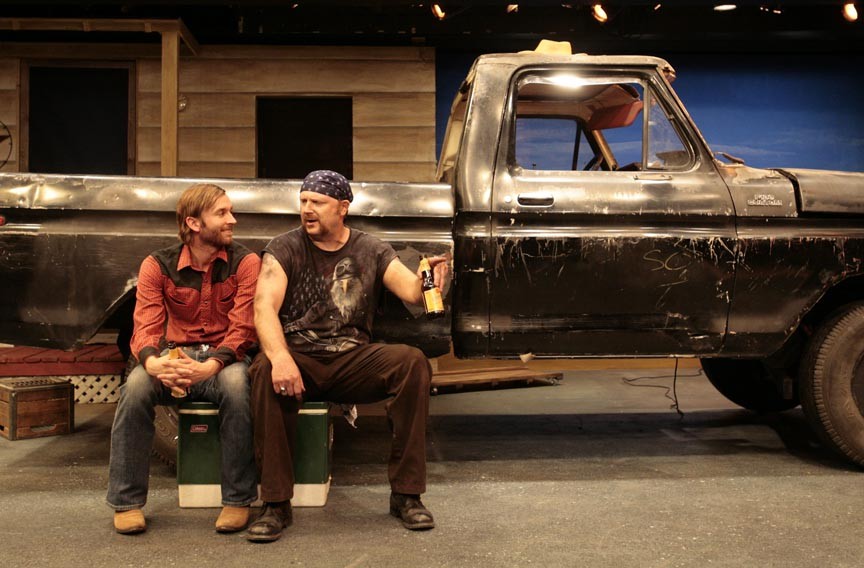 With their busted pickups and lonely hearts, the characters of "Nice People Dancing to Good Country Music" would feel right at home in a honky-tonk number of their own.

There's Roy, the lovesick dimwit who just can't find the right words to pick up the ladies. There's Jim, the reformed biker with a beat-up Ford and a girlfriend who won't admit she loves him. There's Northern transplant Eva June, who ran away from her husband and son to live with Jim in Houston. And there's nun-in-training Catherine, who's giving the outside world a chance for a change. Lee Blessing's script brings this crew together in a character study of one evening at the Nice People Dancing to Good Country Music bar.

Finishing up a remarkable season, Matthew Mitchell is hysterical as Roy. With every phrase and tic, he paints a fully realized picture of the simpleton ditch digger. David Bridgewater plays Jim with an appealing mix of physical menace and oafish charm. Jim is a grizzly bear turned teddy, and in scenes where he goes toe-to-toe with Eva June's son Jay Bob, Bridgewater leaves the audience guessing whether he'll seriously harm or simply harass the young hellion.

Joy Williams' broad portrayal of Eva June works for her character, but Liz Earnest has some trouble capturing all of the conflict within Catherine. It's a tough role, with its clashing attitudes of curiosity and anger toward the world outside of the convent. Daniel Allen is appropriately irritating as the raucous teenager Jay Bob.

Blessing's script delves humorously into its characters' loves and aspirations but skillfully avoids overreaching. These are normal people, and this is how they talk. With its cast of stereotypically redneck characters, it would be easy for such a production to devolve into cheap ridicule, but under Steve Perigard's direction, the tone is amiable and sympathetic.

In one of the best sets this season, Terrie Powers' design morphs a heavily dented Ford pickup into the raised balcony of a bar. Lynn West's costumes fit the characters, and Hilary Koss never misses a light or sound cue.

Though there's little dancing and only a handful of country tunes, Virginia Rep's "Nice People" is well-executed, frequently funny and one of this season's most delightful shows. S