Evatran: How a Richmond Startup is Forging New Roads in the Electric Car Industry

Jake Rath squints under a 2015 Chevrolet Volt, one of the cars being touted as the personal transportation mode of the future.

“This is the module,” he says, guiding two technicians through installation training at Rick Hendrick Chevrolet Buick GMC in Short Pump.

When owner Scott McCoy picks up his vehicle later in the day, he’ll drive it to his house in Chesterfield County, follow the dancing green arrows on his dashboard and park the Volt directly over another module installed in his driveway.

When the two modules are within about four inches of each other, his Volt will start recharging wirelessly. There are no cables or plugins. A full recharge takes about three and a half hours — instead of the 10 hours required for a cable recharge. There’s also no danger with the transfer of inductive power. A mouse could run between the modules with the power on and not be fried.

“My wife drives the Volt, and this way she won’t have to get out of the car in rain and snow and plug a cable in to recharge,” says McCoy, a sales executive who lauds the day he bought an electric vehicle. 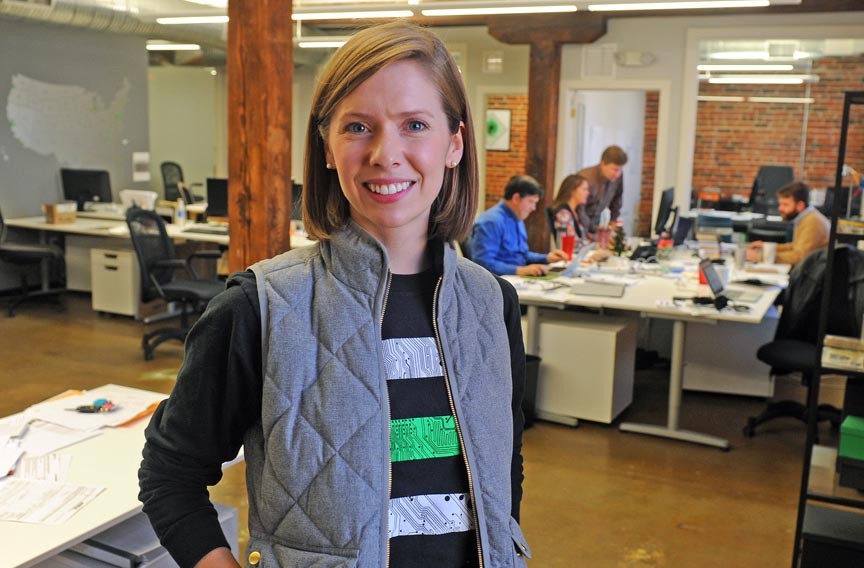 That’s exactly the kind of feedback Rebecca Hough wants to hear. The photogenic 29-year-old co-founded Evatran Group with her father not long after she graduated from the University of Virginia’s McIntire School of Commerce in 2008.

“We’ve had year-to-year growth of anywhere from 25 percent to 100 percent from 2011 to 2014,” Hough says, sitting in Evatran’s modest offices in a renovated brick Shockoe Bottom building.

During that time, Hough has won acclaim in such national business magazines as Inc., although Evatran hasn’t gotten much coverage in Richmond-area media.

Evatran’s wireless recharging brand, Plugless Power, is available in aftermarket packages for such electric or hybrid vehicles as the Chevrolet Volt, the Nissan Leaf, the Cadillac ELR, BMW I3 and the Tesla Model S.

It costs $1,240 to install one in a Volt at one of 50 dealerships in the United States and Canada now trained by Evatran officials. Some installations cost $2,800.

Electric vehicles, or EVs for short, have received environmental acclaim because they emit virtually no carbon dioxide, particulates or other pollutants that can contribute to climate change and lung disease. And because electricity can come from renewable energy such as solar or wind power, there’s an added bonus. But it also could revive the use of dirtier sources of electricity generation, such as coal.

In 2008, President Barack Obama hoped that about one million EVs would be sold annually. That hasn’t happened, and it’s causing some momentary bumps for Hough and her company.

One immediate problem is that tanking crude oil prices and unexpectedly cheap gasoline have dampened the momentum of electric car sales. Last year, nearly 400,000 were sold in this country, about 6 percent fewer than in 2014.

Hough acknowledges that Evatran’s growth sputtered to about 5 percent from the expected 20 percent last year, but she doesn’t see that as long-lasting. “If you look at the news,” she says, “companies such as Ford, Tesla and BMW are putting huge amounts of money into EV development.”

And Hough has been expanding hard into the global market, especially Asia, which she visited last fall.

Early this month, Evatran announced that Zhejiang VIE Science and Technology Co., a Chinese auto parts-maker based in Shenzhen, is helping Evatran raise $10 million to sell Plugless units in China. There, air pollution is such an extreme problem that residents in huge cities like Beijing must regularly wear masks to breathe safely. 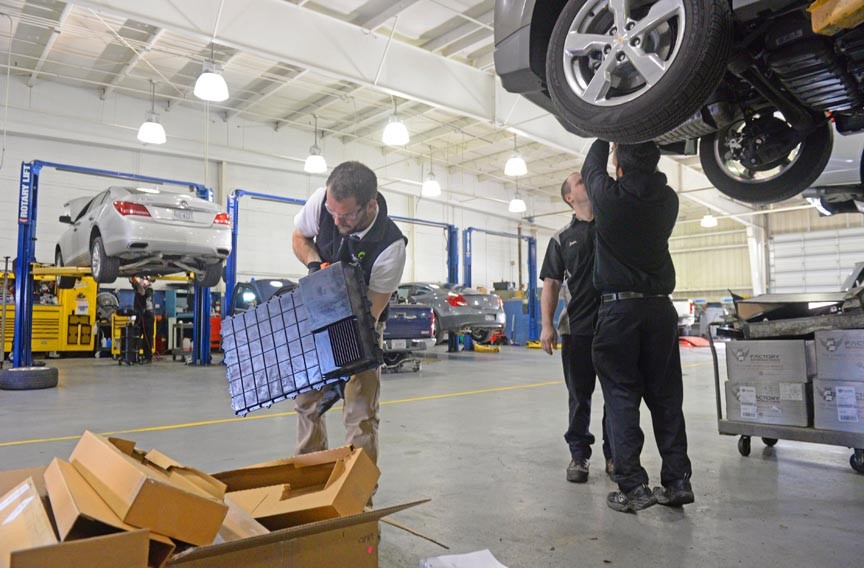 Evatran’s technology might sound cutting edge, but it’s actually more than a century old. It was developed by a Serbian immigrant named Nikola Tesla (1856-1943) who’s been dubbed “the greatest geek who ever lived.”

The electronics whiz came up with a plan for beaming electricity wirelessly using magnetic fields. In so doing, he used an inductive method for transferring power rather than the standard conductive method, which involves wire-to-wire contacts and can cause electrocutions. “This is not a brand new technology,” Hough says, “but an old technology being repurposed into a new technology.”

Consider the cordless toothbrush. It recharges without wire contacts, which is a good thing. Because such toothbrushes are kept next to bathroom sinks, using wires conductively for recharging can be dangerous because they would be too close to water. By using the inductive process, Hough says, there’s no danger.

The Tesla concept is so seminal that Elon Musk, the billionaire inventor known for his SpaceX self-landing rocket boosters and said to be the model for the “Iron Man” movie series, chose Tesla’s name for his line of all-electric cars. His Tesla Model S, although expensive, led all EVs in sales last year.

But one problem with Teslas, as with all EVs, is that they can go only so far on one charge. Musk has been building special plug-in cable recharge stations across the country to solve the issue. Evatran, which offers aftermarket Plugless Power fittings for about 60 percent of EVs sold in the United States, now can handle Teslas.

Rebecca Hough credits her father, Tom, with laying the groundwork for Evatran’s inductive recharging technology. He started working for General Electric in 1973 and later bought MTC Transfer, a company that helped customize and revitalize power recharging stations and transformers.

While she grew up in Roanoke and Florida, her father came up with new ways to solve problems with worn-out transformers.

“If you came to us with a transformer designed in 1920 and it is in the middle of a building where there’s no way to get it out,” she says, “my father would find a customized way to rebuild it.”

Hough went to U.Va., and after graduation worked in New York at Kurt Salmon Associates, a global management consulting firm. In 2009, she ended up back in Virginia where she was working with her dad at MTC Transformers exploring new ways to use inductive recharging.

Evatran spent its formative two years in Wytheville, a small town of about 8,000 where interstates 81 and 77 intersect in the mountains of southwest Virginia. Costs were low but Wytheville had its downsides. “We had a challenge bringing engineers to Wytheville because of the rural location,” Hough says.

So her team pulled out the maps and started looking for a new location that was within three hours by car from Wytheville to specialized electronic engineering talent. They considered Richmond initially but rejected it because it didn’t have the talent pool necessary, despite Virginia Commonwealth University. “Raleigh was by far the strongest engineering hub of talent,” she says. “It’s where we opened our second office.”

Soon, Richmond came back in the picture. Helping the process along was the state of Virginia, which was trying to recruit and incubate promising new tech startups. Another was the angel financing group New Richmond Ventures, founded by prominent local businessmen J. Robert Mooney, Theodore J. Chandler and James Ukrop, along with Stefanovich, a best-selling business author and expert from Michigan.

Evatran, which was spun off from MTC Transformers, was a good fit for New Richmond Ventures because it met its goals of having a promising and saleable new technology. It also met the test of having a socially responsible purpose, such as pushing renewable, less-polluting energy. “We had some great state support, along with support from NRV through the Ukrops,” Hough says. 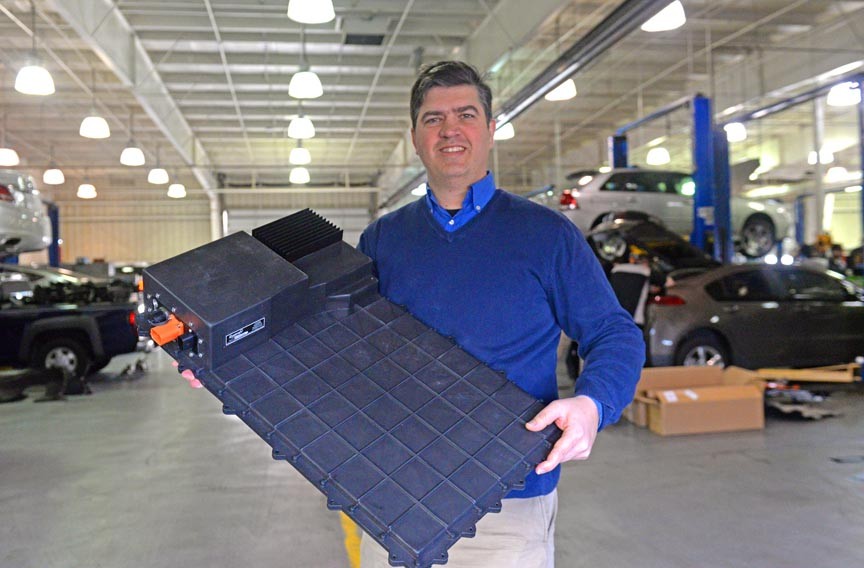 The company’s first two years were spent storming on research and development, mostly at Evatran’s secretive R&D facility in Raleigh, North Carolina, where it could draw from North Carolina State University, Duke and the University of North Carolina at Chapel Hill. From there, it leapfrogged into two marquee-name national research labs.

In 2012, Evatran won a three-year subcontract from the federal Department of Energy to research the recharging of high amounts of power needed for electric vehicles at the Oak Ridge National Lab in Tennessee. Among its partners were auto parts companies Bosch Automotive Service Solutions and Sears Home Services, which would help distribute the new Plugless systems. A second research grant with the Department of Energy followed at Idaho National Lab.

In time, Evatran had nestled into new headquarters in a former red brick warehouse at 7 N. 25th St. in Richmond with a staff of 10 people. The Raleigh lab works away with 10 researchers. Five more are moving from a manufacturing facility in Wytheville to Richmond where all production will be consolidated at an undisclosed site.

“There’s a ton of talent in marketing and sales here but we still struggle with engineering talent in the area,” Hough says. “It’s getting better with VCU and its growth, but it’s really important for us to get the top talent we can find in power electronics, which is a very specialized field of engineering.”

Still, locating in Richmond is a good move because of its amenities, cost and easy transportation access. “I get queries from friends of mine in New York who are thinking about settling here,” she says. And while Richmond is not known as a major venture capital center, that’s beginning to change as well, because of groups such as New Richmond Ventures and others.

In 2013, Hough made Inc. magazine’s influential 30 Under 30 list. But Evatran hasn’t attracted much attention locally.

Stefanovich says that he experienced the same attitude in an unrelated business venture he had that was based in Richmond. “It was all Chicago and Los Angeles and New York and London,” he says, “but not much here.”

For now, Evatran must be ready for an upturn in the electric car market. It has a strong presence in the aftermarket sector but wants to move into the original equipment, assembled-at-the-factory market. 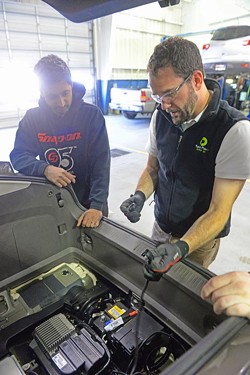 It faces plenty of competition from huge players such as Qualcomm. Hough is optimistic the turn will come with Ford, Tesla and BWM putting big money into electric car research, she says, “because they think the price of gas is going to go up.”

“Look at it this way, BMW introduced their I3 and I8 electric models last year and they are already 7 percent of their sales,” she says. Plus, gigantic international markets such as China and India beckon. Both countries suffer such serious pollution that their governments are putting a premium on making sure new vehicles aren’t powered by stinky and old-fashioned internal combustion engines. In China, Hough aims to have her assembly at the car factories as standard equipment.

In that regard, McCoy is a case in point. He says he’s delighted with his 2015 Chevrolet Volt, even though it’s a hybrid, because it has a small, four-gallon gasoline engine that can kick in if the batteries run low. “You can barely hear it,” he says.

New versions of the Volt run at around $40,000, but the federal government offers a $7,500 rebate in the form of a tax deduction, as do some states. McCoy says he searched around because not many electric cars were for sale in Virginia. He found his Volt last spring in Columbus, Ohio, where he could save another $4,100.

The car is plenty peppy and could handle the trip home over the Appalachian Mountains with ease. “I actually picked up six or seven miles through recharging when I was rolling down the hills,” he says.

And the Plugless Power addition will make the car much more convenient, he says. “It will use 240 volts instead of the usual 120 volt connection, so it charges so much faster,” he says. “It won’t take 10 hours to charge and it doesn’t matter if it’s raining or snowing.” S