Sonic Youth guitarist Lee Ranaldo talks about the new album and saying goodbye to the majors. 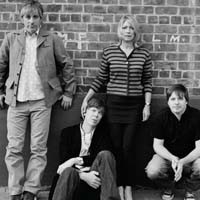 You've got to hand it to Sonic Youth: Being a rock band for nearly 30 years and maintaining your integrity is no easy feat. Born from the experimental No Wave scene of late-'70s New York, the noisy group has always done things its way, often led by angular, screeching guitars retuned and played with things like power drills, drumsticks and other foreign objects. Widely considered godfathers of the indie rock scene, the band never produced big sales, but was influential as a creative link between punk and the more commercial alternative rock movement of the '90s.

The band's new album, “The Eternal,” marks an exodus from its long stint on major label Geffen for the familiar comforts of a New York independent, Matador Records. Critics and fans are heralding it as a return to the vigorous, song-driven energy of classic albums such as “Daydream Nation” (1988). A hefty biography of the group, “Goodbye 20th Century,” by David Browne, was also released this year.

Style spoke by cell phone with guitarist Lee Ranaldo from a cramped hotel room in New York for a conversation that was, fittingly, marked by weird sonic abnormalities and distorted, occasionally dropped signals — so much so that the guitarist had to seek refuge in a bathtub.

Style: Over the decades, have things changed that much in terms of your original concept for the group?

Ranaldo: I would say the conception has stayed the same since the beginning — the focus on the music and making something that challenges us to go out and play. Of course, we've gotten older, have kids, mortgages, but the process is still very similar to when we started. …We still play in open tunings, which hasn't been that common in the history of rock 'n' roll. That's pretty critical to the way we write songs as each one has its own tonality.

We started when we had cheap guitars that wouldn't tune normally and adopted it as a procedure. You start creating a chord with open strings, that impacts where you go sonically. So many tunings having different things they afford. [On this record] I'm using one tuning originating in the “Sister” days, another is more common to recent records, some are brand new. It's a mixture of older ones and new ones.

The new music sounds rejuvenated. What had more to do with that, leaving Geffen or re-examining earlier work [the group was asked to perform the “Daydream Nation” album in its entirety for a concert]?

All of that stuff. Playing the “Daydream” stuff definitely had an impact. We're not nostalgic-minded as a band but once we were convinced to do it, we were all hit by the ferocity of that material. Part of it was being back on Matador. Part of it is just the natural way our songwriting swings back and forth. I think it was time to make a record that was a little more upbeat. But we don't really conceptualize what kind of a record we're going to make before we start.

Do you think Geffen basically used you as a hipster magnet to attract other bands during that alternative gold rush?

I think that is true. Definitely thanks to our influence, Nirvana ended up on Geffen and Beck [also did]. … Overall, we're interested in new things that are happening. From the first time we were able to do so, we started bringing bands on the road with us, talking up bands. That's still the case today. We showcase them and hope they will inspire us and our audience. Right now, we have a huge museum show traveling around Europe for the last two years, showing our enthusiasms, young artists and old artists. In a visual sense it's the same thing we do musically, wanting to present our place within a community. It was never about trying to be the pinnacle; we've always enjoyed the idea of community.

Matador isn't really the small indie label some might imagine.

They have grown a lot. But in this day and age, with the way the Internet has impacted the radio industry, it's less relevant whether a label is a corporate beast or not. One thing you have to say about Matador, they know very well who their public is, who they're selling to. Their focus is strong; while majors get very amorphous, they're doing so many things that they can't do most things super well. When we signed to the major in the early '90s, the reasoning was better distribution. But that's not an issue anymore.

You've got the great American-primitive guitarist John Fahey's art on your cover — and you knew him in his final days. What do you think led him to more discordant, experimental work towards the end?

I think he was just stretching out. We were frankly very interested in that work. He was somebody known for years as this primitive acoustic figure, but he was a contrary guy, you know? The last 10 years of his life, he said, “I'm going to play electric guitar, and try a bunch of weird pedals.” He was always playing around with tape tracks he recorded and natural sounds, but never wanted to be known only as an acoustic guitar player per se. For him to have branched out that way late in his life, I loved it and thought it was great.

What was the impetus behind the combined vocal approach on the album?

We played around over the years with different vocal combinations, but on this record there's a lot more of that. I'm not sure why. It's been happening more in spots. It's funny for a band to be around 28 years with three singers, and then finally decide to sing more together. I kind of like that it took us that long, that's kind of the way Sonic Youth works. … This is the first full record we've done with John Agnello, who mixed the last record. Also, the first record in our new studio — because of real estate prices, we moved to Hoboken where Steve [Shelley, the drummer] lived. The sound is great and we're really pleased with the way the studio sounds. We got to work in a more casual fashion. Write some, record some, recording off-and-on on different weekends, building up a stockpile, not recording until your eyes are blind or whatever.

While it still has some unusual sounds, “Antenna” sounds like a more accessible, poppy song than most of your stuff.

Yeah, I'm really into that one. It came out really beautifully. It's that kind of song that came out well on this record.

Did having your cover version of the Carpenters “Superstar” in the hit movie “Juno” introduce the band's music to a wider audience?

It put our name out there for a bunch of general audience people, yeah. It can't hurt, let's put it that way. A lot of people came up to me later that maybe hadn't heard our records. But I don't know. … it was just kind of a logical cultural touchstone for the character in that movie.

How does it feel to have your own signature Fender Jazzmaster guitar and what was the most important specification you gave them?

As a band that predominantly played Fenders from the beginning, it's cool for them to recognize it. And the timing is good. We've always called them JazzBlasters — because with mine, it has these special hum-bucking pickups. And we got to choose the unusual finishes, all that stuff has been cool. I don't know: The list price is probably going to be $2,000 — street price more like $1,400 to $1,600. They're American-made, well-made guitars. We were trying to keep the price down; I was hoping they would be cheaper, but members of our crew tell me it's pretty decent.

I have a VHS copy somewhere of “1991:  The Year Punk Broke.” Will that European tour documentary [featuring Sonic Youth, Nirvana, the Ramones, Gumball, Dinosaur Jr.] ever be released on DVD?

It definitely will. We're working on it. We've got tons of amazing extra footage to go along with it and we're just trying to clear it with Courtney [Love], or the Cobain estate.

You guys haven't played Richmond in forever. Why not, and how does the physical nature of the live room effect what you do?

Yeah, we usually play Raleigh, but not Richmond. I don't know why. … The sound of the room is really important for what we do. The better the room sounds the better we'll sound. But I think we make most rooms sound pretty good. We have a good house guy. We do like to seek out rooms that sound good.

Well, there's still a lot of stuff happening on the whole. When we first all moved here, it was a pretty dangerous place in a lot of parts of town. That's not the case anymore. It's become more homogenized, and in a way more like every other city in America, with box stores and whatever. Things change, and I'm not opposed to change. But musically, it's always been a rollercoaster. There are times when it's more vibrant than others.  But there's always interesting stuff happening here, that's for sure. S