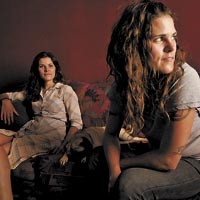 Yes, they do have a bicycle built for two, and yes, they have been known to ride together, but twin sisters Erin and Shelley Briggs have found divergent paths to bring their twin passions for community and bicycling to life.

The sisters came to Richmond to attend Virginia Commonwealth University, pursuing very different educational goals — Shelley for social work, Erin for pharmacy — and found a shared hobby in bicycling. Living in the Fan, Erin says, bikes presented “the easiest way to get around Richmond.”

For Erin, transportation had become a passion and a way of raising awareness — first with a 2005 fundraiser promoting breast cancer awareness. Then she founded a nonprofit and opened a bike shop with partner Evan Venditti. The shop, Richmond ReCycles, focuses both on returning old bikes to new and on teaching riders how to keep their bikes on the road.

Not to be outdone, Shelley took a slightly different route on her bike but still ended up doing wheelies around the basic theme of community service.
A co-founder of Books on Wheels (with previous Top 40 recipient Ward Tefft), Shelley and her partner rev up a beater-school-bus-turned-mobile-community-outreach-project and take their show on the road, getting bikes to low-income people and teaching them basic mechanics to keep them going. The point, Shelley says, is to help people whose most basic need is transportation to get to and from work.

“Bikes — for a lot of people it's their only way to get around,” Shelley says. “It's very empowering to be able to fix things on your own.”
Though they do their own things, the sisters' interests and public-service projects sometimes become a tandem affair. Erin recently traveled to New Orleans on a Books-on-Wheels bus mission. And when Shelley needs parts to put used bikes back on the road to usefulness, she goes straight to Erin for help.

“Richmond as a whole and our tight-knit friends has really influenced what we're doing now,” Erin says. “It's a matter of what you like to do and how far you think you can take it — and making sure it's really fun.”