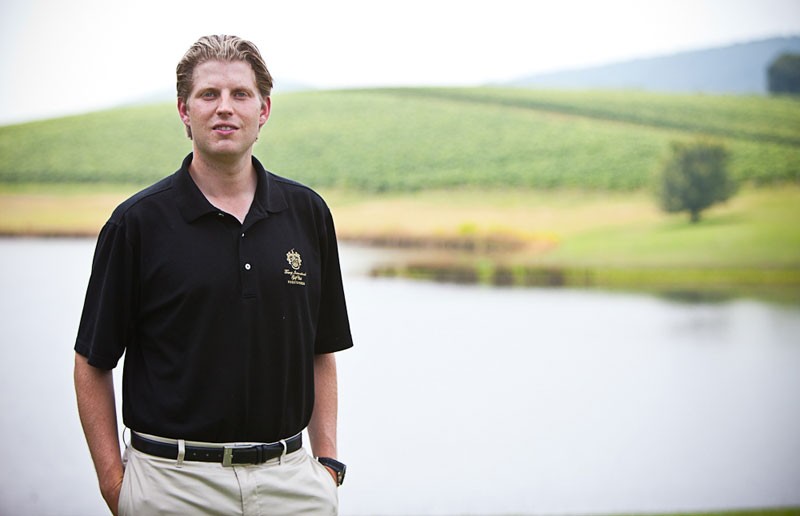 Wine Enthusiast magazine named Eric Trump one of its rising stars in the wine industry yesterday. Son of Donald Trump, Eric is the 29-year-old president of Trump Winery in Charlottesville. The state's largest vineyard has won top awards for reds, whites and sparkling wines this year, and Trump became engaged in July to Wilmington, N.C., native Lara Yunaska. In a telephone interview with Style Weekly, Trump shows his famous father's tendency to speak in superlatives about what's ahead. Wine Enthusiast's winner will be announced in January.

Style: What are you being recognized for with this nomination?

Trump: What we did down in Virginia is exceptional. We took a piece of property that always produced great wine but was in awful turmoil … and through a complicated set of transactions, we took an asset, we rebuilt it, brought in the best winemakers and in very short order we started winning some of the best competitions in the country. The promise I made when we went into Virginia was that not only were we going to lead the way for Virginia, but we were going to compete on the international platform, and we've done so very effectively.

There's also lots of interest in craft beer, especially among your age demographic. How do you market wine to younger consumers?

I think generally speaking the wine industry has changed tremendously over the years. It has become a much younger industry. People want to learn about different things, experience different things, and I think the trends have changed. Years ago you bought wine from France or California. Today they're buying from little vineyards in Oregon, Washington. There are different labels, more creative labels, there's been a reversion to a little less stuffy, different price points, and marketing toward people in their mid-20s and 30s and that didn't exist years ago.

And this nomination from Wine Enthusiast magazine -- what does it mean to you?

It's great that it really focuses on the younger generation of people who desire to do great things in the industry. It is a nice big project for us, our heart is certainly there, we put tremendous effort into making this the best and the biggest. It's very consistent with what we do as a family. We want to be the best, we have to be the best and we won't stop short of that.

What have you learned about winemaking?

Wine was a very different business for us but it had so many tie-ins -- wine is agriculture, it's weather dependent. In terms of planning inventory, bottling, aging, you need to plan what you're going to sell seven or eight years in advance. It's really a beautiful process but you have to look so far in the future, and that's a lot of fun.

Agriculture is what we do on the golf side. We love land, we love real estate obviously, and when you're looking at this carriage museum and the rows of vines as far as the eyes can see of the most beautiful grapes, the chapel right in the middle of that, nestled in a patch of trees, it's just so much fun. Then you start learning about the varietals, where they grow best, the rain, sugar content, it's just something that is amazingly complex for something that people may drink so fast, if that makes sense. What goes into the production of wine is what is amazing -- it's truly an art, and a science, and it's a very special thing.

Will your wedding take place at the vineyard?

We're looking at that.