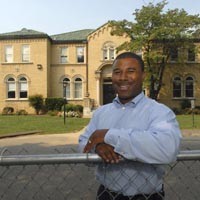 As Eric Townsend acknowledges, it's a "huge jump" from working in information technology to counseling and comforting children who have been traumatized by homelessness, abuse and other experiences that have left them in need of serious help.

But Townsend has made that jump. His training was in technology, and he was doing well with prospects of making a big salary. But in the back of his head was his dream of being a coach, working with children -- and making a difference.

He began by teaching in the Richmond Public Schools. Then in 2005 he became director of the emergency shelter at St. Joseph's Villa. There, he works with children who come from all over the state. At the center, Townsend and his staff are on call 24 hours a day to deal with the behavioral problems trauma has left with his charges.

While he's worked as a volunteer coach with a YMCA metro basketball team, he's now a coach whose players each have a different problem. Has he regretted his jump? "No" is the firm answer. His gratification comes in a different way, he says, but it is there. "You can't put a price tag on helping kids in need."